Toledo Being MAC Play On The Road At Central & Eastern Michigan 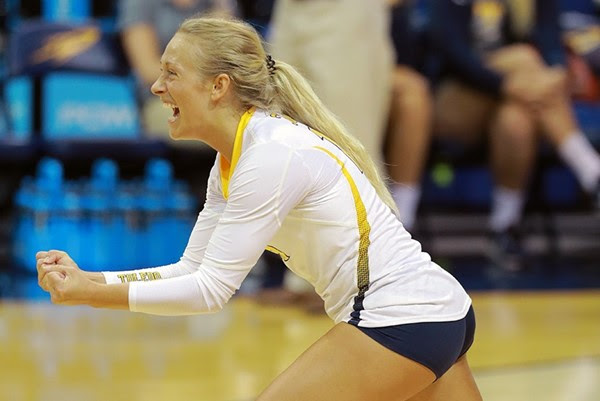 After four weeks of tournament play, the Toledo volleyball team has its first conference matches of the season this week with trips to Central Michigan and Eastern Michigan on the docket. Current Photo via Toledo Athletics

After four weeks of tournament play, the Toledo volleyball team has its first conference matches of the season this week with trips to Central Michigan and Eastern Michigan on the docket.

Last Time Out
The Rockets went 2-1 at the Blue/Gold Invitational, notching wins over Tennessee Tech and New Mexico on Fridaybefore falling to Youngstown State in five sets on Saturday.

Senior Annie Beasley was named tournament MVP after posting a team-best 3.00 kills/set over the course of the weekend. Freshman Chloee Kleespies and senior Rachel Vidourek were also all-tournament selections, racking up 2.58 and 2.17 kills per set, respectively.

Freshman Rhyen Neal had five service aces over the course of the tournament while senior Lauren Bakaitis and freshman Caleigh Barhorst each tallied three. Junior Maurissa Leonard averaged 5.33 digs/set during the weekend, including 24 in Saturday’s match against the Penguins. Senior Brianna Foster led all comers on Saturday with 46 assists and had 131 across the three games played (10.92/set). Foster also recorded a double-double against Youngstown State with 46 assists and 15 digs.

By the Numbers
Here are some notable numbers for Toledo:

Scouting the Competition
Central Michigan: The Chippewas sit at 8-4, their most recent result being a 1-2 showing at the Shamrock Invitational. The lone victory came against Southern Illinois in three sets, while the two losses were against tournament host Notre Dame and Michigan State. Prior to that the only losses Central Michigan incurred were to Cleveland State and Penn.

Senior Jordan Bueter leads CMU with 4.63 kills/set and also in service aces, totaling 17 this season (0.4/set) She is one of the highest scorers in the country this year, averaging 5.29 points/set which is 14th in the NCAA. Senior Paige Carey had a good weekend at the Shamrock Invite, being named to the all-tournament team. This season she’s averaging 2.30 kills/set and 0.74 blocks/set; her 32 total blocks are tied for most on the team. Sophomore Megan Kern is the team’s leader with 4.26 digs/set and Bueter is second with 2.70.

Eastern Michigan: The Eagles are 8-8 on the season and will have a match against Ball State the day before the Rockets visit Ypsilanti. Last weekend EMU was in the Windy City for the Chicago State Tournament, defeating Southeast Missouri State but falling to Chicago State and Louisiana Lafayette. EMU has lost four of its last five matches, but prior to that was riding a five-match winning streak. They went 4-1 at the Towson Tournament two weeks ago with the only loss coming to the tournament hosts who currently own a 14-0 record. EMU shares two common non-conference opponents with Toledo and both teams had the same results: a win over Quinnipiac and a loss to Fort Wayne.

Eastern Michigan has paced the MAC with 2.44 blocks/set this year and seniors Kelly Ferguson and Samantha Falco are 1-2 individually in the conference ranks (1.07 and 1.04, respectively). Ferguson is hitting at a .414 clip, which is also tops in the MAC. Junior Alyssa LaFace made her season debut on Sept. 8, but she has been the Eagles’ leader at 5.03 digs/set since her return

Beasley averaged an even 3.00 kills/set, reaching double figures in all three matches, and she did so efficiently. Over the course of the weekend she hit .476, .474, and .406, leading Toledo in all three matches in that category. Two of the Rockets’ three highest single-game hitting percentages came last weekend, fueled by Beasley’s play. She also had a match-high six total blocks (one solo, five assists) in the win over New Mexico and had a season-high 16 kills in the five-setter against Youngstown State.