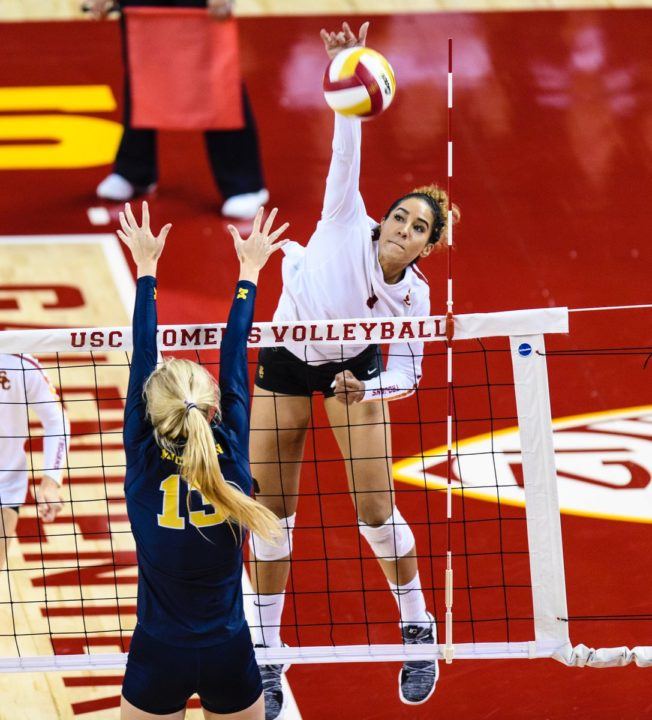 The No. 21-ranked USC women's volleyball team (8-3) opens league play on the road against crosstown rival No. 11 UCLA (7-2) on Wednesday, Sept. 20. Current Photo via USC Athletics

The match at Pauley Pavilion is USC’s ninth straight on the road and equals the longest stretch of road and neutral matches for the Women of Troy since they opened 2013 with nine straight matches away from home. The Trojans are stacked at the pins and rely heavily on OHs Khalia Lanier (4.28 kps) and Alyse Ford (2.53 kps) and OPPs Brittany Abercrombie (2.76 kps) and Niki Withers (2.53 kps) to drive the attack. In the middle, senior Jordan Dunn (1.14 bps) and junior Brittany Welsh (0.89 bps) anchor the net efforts. Setters Reni Meyer-Whalley(6.07 aps) and Cindy Marina (5.37 aps) run USC’s 6-2 system in which libero Victoria Garrick puts up 3.95 digs per set.

LAST TIME OUT: The Trojans split matches at the Maryland Challenge as USC fell, 3-0, to the host Terrapins but bounced back to claim a 3-1 win over Oklahoma. Brittany Abercrombie and Khalia Lanier were each named to the all-tournament team. The loss to Maryland snapped a three-match Trojan winning streak and was the first-ever win for the Terrapins in five all-time meetings. It was also the first time this season that the Women of Troy were swept. The win-loss weekend completed non-conference play for the Trojans, who finished with an 8-3 overall record.

1,000 SHIPS: USC’s win over Arizona State on Oct. 5, 2016, was the program’s 1,000th all-time victory. The Trojans became the 17th program in NCAA Division I women’s volleyball history to reach the 1K milestone. USC is the owner of six national championships (three AIAW and three NCAA) and has won eight conference crowns including two since the inception of the Pac-12 (2011 and 2015). Head coach Mick Haley has led USC to each of its 100-win milestones since the program’s 600th victory. The Trojans won their 800th, 900th, and 1,000th all in home matches under Haley’s direction.

BUT FIRST, LET ME TAKE A #SELFIE: Get social with the Women of Troy this season. Fans can follow and interact with the USC women’s volleyball team on Twitter, Facebook, Instagram, Snapchat, and Periscope by searching for @USCWomensVolley.