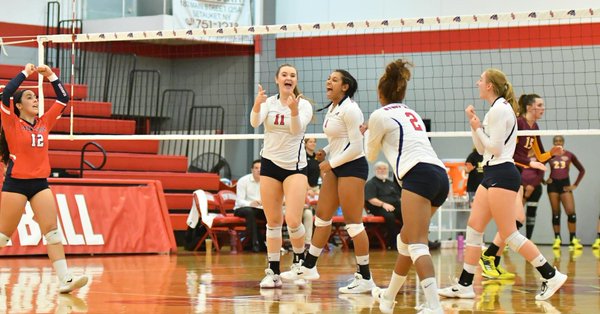 No. 1 seed Albany is out in the opening round of the America East Tournament, falling to No. 4 seed Stony Brook via sweep. Stony Brook will play No. 2 seed Binghamton for the league's automatic berth at 5 p.m. ET Saturday. Current Photo via Stony Brook Athletics

No. 1 seed Albany is out in the opening round of the America East Tournament, falling to No. 4 seed Stony Brook via sweep. Stony Brook will play No. 2 seed Binghamton for the league’s automatic berth at 5 p.m. ET Saturday after downing No. 3 seed New Hampshire in straight sets.

Stony Brook’s win marks the first time since 2005 the tournamnet’s No. 4 seed will play in the championship match.

It Was Over When: Down 21-20 in Set 3, Binghamton rallied with five of the final seven points to finish out the sweep. The Bearcats got two kills from Alicea and one from LaGoy to make it 24-22. A service error two points later closed out the win.

Next Up: The Bearcats advance to the America East championship match vs. Stony Brook, set for 5 p.m. ET Saturday. This marks the first conference championship appearance for the Bearcats since 2012. A win would give Binghamton its first NCAA berth since 2012 and sixth in program history.

Key Stats: Hitting errors piled up for Albany as the team committed 21 miscues and managed just a .103 hitting effort in the loss. Stony Brook, meanwhile, managed an efficient .280 clip, including a .345 effort in Set 2. The Seawolves outdid the Great Danes in kills (44-33) and blocks (6-3), while both teams managed five aces.

It Was Over When: Trailing 10-9, the Seawolves scored five in a row to go up 14-10. Albany narrowed the gap to one at 16-15 and 18-17, but could not break through. A Taylor Robinson kill had the Great Danes down two at 22-20, but Stony Brook capped the upset with three straight kills, one each by Cydney Bowman, Costello and Brooks.

Next Up: Stony Brook will make its first America East championship appearance since 2011 at 5 p.m. ET Saturday against Binghamton. The winner will receive the league’s NCAA automatic berth. A win would give Stony Brook its first ever NCAA Division I Tournament berth.