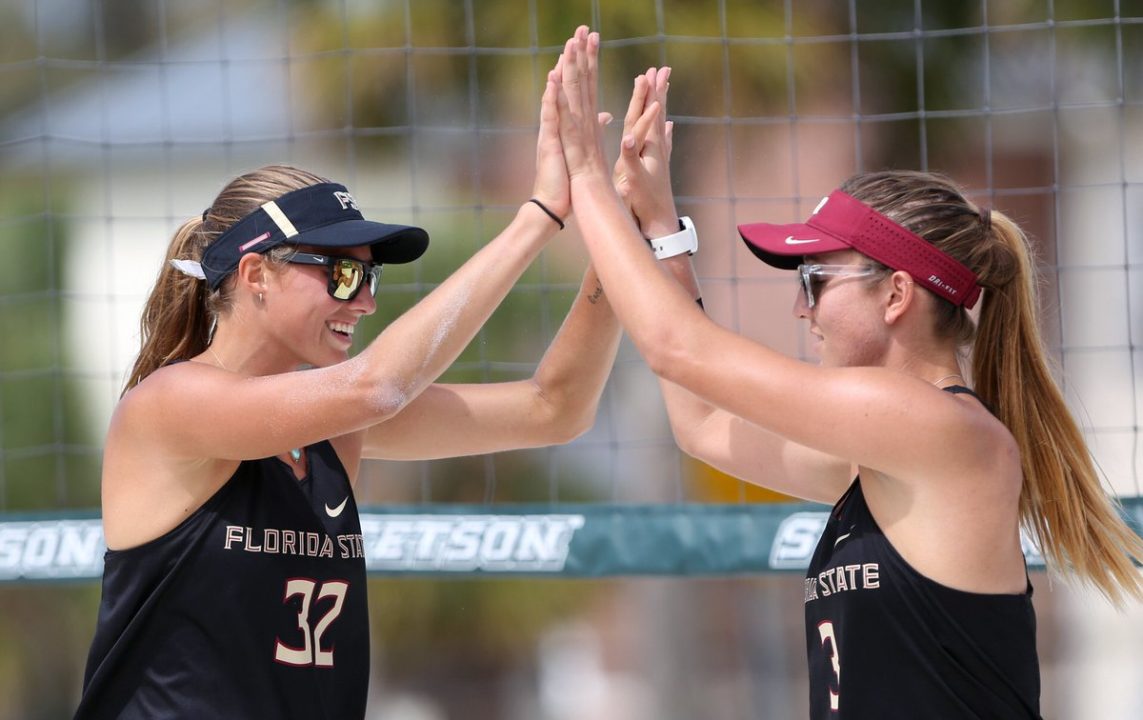 LAKEPOINT, Ga. – Following an undefeated conference season, the Florida State beach volleyball team heads into a third consecutive CCSA Beach Volleyball Championship as the No. 1 seed this weekend. Pool play is scheduled for Friday and Saturday, April 20-21, while the semifinals and championship match will be held on Sunday, April 22.

The Seminoles (24-6, 10-0 CCSA) faced eight conference members this season, and recorded a combined 46-4 pairs record in the 10 matches they played this season. The two-time defending CCSA champions head into the tournament after winning its last 12 matches, six of which were against conference opponents.

Florida State has never dropped a match in the CCSA Championships, and is looking to maintain its perfect record on the way to its third consecutive conference title.

UNCW enters the Championship as a No. 10 seed after going 1-8 in conference play this season, with its only win coming in a 4-1 decision against UAB. The Seahawks haven’t played a match since FSU’s Seminole Beach Battle on April 6-7, where the team went 0-3, falling to FSU, Florida Atlantic and Georgia State before their final match against TCU was canceled.

Florida State has a perfect record against UNCW, sweeping all three of the meetings between the two teams. The last time the two teams met was earlier this season in Tallahassee. FSU swept the Seahawks in each team’s first match of the Seminole Beach Battle. The Seahawks and the Seminoles have only met once in the postseason, when FSU earned a 5-0 win in the 2017 CCSA Championship.

FAU holds the No. 8 seed in the Championship this year. FAU had a week off after playing in FSU’s Seminole Beach Battle, where the Owls went 2-1, falling to Florida State and taking down UNC Wilmington and TCU. The Owls have three conference wins this season, earning their first win over LSU in the beginning of the season and following it with a pair of wins over College of Charleston and Tulane at the Tiger Beach Challenge.

Florida State is undefeated against Florida Atlantic, holding an 8-0 record in the series after sweeping the Owls twice this season. In the eight matches in the series, FSU has only surrendered two points. The team has only met once in the postseason, when the Seminoles defeated the Owls 4-1 in the 2017 CCSA Championship.

As the No. 4 seed in the tournament, LSU enters the postseason with a 7-5 conference record after defeating UNC Wilmington, Florida Atlantic, College of Charleston, Tulane, UAB and Georgia State. The Tigers were the only CCSA team to earn more than one point in a match against FSU this season, with the 3-2 decision coming as the closest conference win of the Seminoles’ regular season.

Florida State is undefeated against the Tigers. The last time the two teams met was last weekend, when the Seminoles defeated the Tigers for its tenth and final conference win of the regular season. Four of FSU’s six wins in the series have come under head coach Brooke Niles, two of which were in Baton Rouge.

Georgia State enters the Championship with the No. 5 seeding. The two teams were unable to meet at the Seminole Beach Battle after matches were canceled due to weather, but the Panthers were the next team up for FSU at the Battle on the Bayou. Florida State won in a 5-0 decision for the first time in the series. GSU went 2-0 in the final day of regular season competition, taking down New Orleans 5-0 and overcoming a 2-0 deficit to defeat TCU 3-2.

Florida State leads 7-1 in the series. The Seminoles have not lost to the Panthers under Niles, and have won the last five meetings in the series. The two teams have met only once in the postseason, when FSU won a 3-0 decision against Georgia State to claim its first CCSA Championship title in 2016.

The CCSA Championship semifinals and finals will be airing live on Eleven Prime on twitch.tv along with their linear channel; which is available on DIRECTV channel 623, Verizon Fios channel 597 and AT&T U-verse channel 1665.