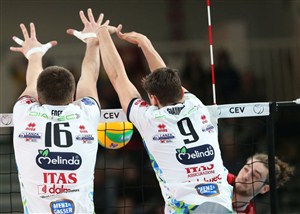 Diatec Trentino's Simone Giannelli (#9 above) showed off his blocking in the team's final match of Pool E in the 2018 CEV Champions League.  Current

Diatec Trentino’s Simone Giannelli showed off his blocking in the teams final match of Pool E in the 2018 CEV Champions League. The team took on Noliko Maaseik with Giannelli posting 9 blocks in the win, the third best-blocking performance by a Trentino player in club history.

With the 9 blocks and the win, Giannelli took home the MVP of the match. Both players ahead of Giannelli in the blocking category posted 10 blocks in their matches – Djula Mester and Emanuele Birarelli.

No setter on Trentino’s teams has posted this many blocking points, as middle blockers typically pick up more blocks.

So far in the Champions League, Giannelli has set up his teammates to success, with two players ranking in the top-15 of scoring in the fourth round – Uros Kovacevic with 97 points and Filippo Lanza with 87.