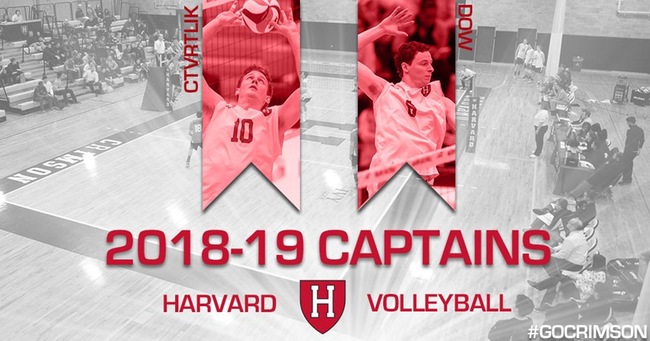 Ctvrtlik was the only men's Division I player to record a triple-double in the 2018 season. Current Photo via Harvard Athletics

Rising senior Trevor Dow and rising junior Matt Ctrvtlik have been named the captains of the Harvard men’s volleyball team for the 2018-2019 season. After a vote of their teammates, the two will take the reigns from outgoing-seniors Jack Heavey and Riley Moore, who shared captains responsibilities last season.

Harvard is coming off a historic year where the team, in spite of a 13-14 overall record, won the EIVA conference title to advance to the NCAA tournament for the first time in program history. They were informally the #6 seed and lost to #3 seed UCLA 3-1 (23-25, 25-21, 25-11, 25-21) in the quarterfinals of the tournament. UCLA went on to play in the national championship match, where they fell 3-2 to Long Beach State.

Dow, a 6’10” middle blocker from Needham, Massachusetts, appeared in all 27 matches and 107 sets for Harvard this season. He registered a career-high in kills (153), digs (29), blocks (101), and points (240) as a junior, even though his .290 hitting percentage was exactly .100 points lower than it was during his sophomore season as he evolved into a focal point of the Harvard offense.

Ctvrtlik, a 6’5″ setter, from Newport Beach, California, was the only NCAA D1 Men’s Player to register a triple-double in the 2018 season. On January 20th, against Ball State, he had 10 kills, 10 digs, and 16 assists. He also had 4 double-doubles on the season, and ranked 2nd on the team in assists-per-set (5.14) and digs-per-set (1.87). After just two seasons, and even with split opportunities at setter, he already ranks 9th in program history with 940 sets.

Ctvrtlik is the team’s first underclassman captain since Nick Madden, who served in back-to-back seasons in 2013 and 2014.