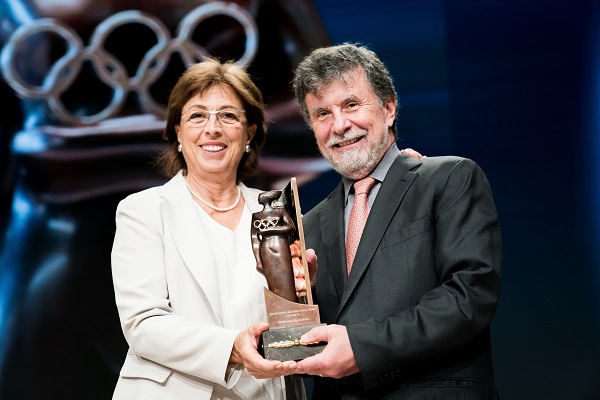 Established in 1966, Eczacıbası excelled in chess, basketball, volleyball, gymnastics and table tennis before focusing its resources exclusively on women’s volleyball in the early 1990s.  Current Photo via IOC

The International Olympic Committee (IOC) has awarded Turkey’s Eczacibasi Sports Club, currently captained by Team USA’s Jordan Larson, the 2018 “Women and Sport World Award.” The accolade, the most prestigious worldwide award when it comes to women’s participation in sports, is awarded every year to individuals or organizations who are protagonists in encouraging women to participate in every area of sports. Winners are chosen from nominees submitted by 206 National Olympic Committees, among other IOC-linked bodies. This has been the first time since the award’s launch in 2000 that a nominee from Turkey (and a sports club for that matter) receives the trophy.

Established in 1966, Eczacıbası excelled in chess, basketball, volleyball, gymnastics and table tennis before focusing its resources exclusively on women’s volleyball in the early 1990s. Since 1968, the women’s volleyball team has won 27 National Championships, among many other prestigious international titles. The club, known not only for being one of the world’s top teams, also provides thousands of girls the opportunity to play volleyball at its farm system, which currently houses 3000 athletes. The club also has put a lot of effort into increasing the representation of women in sports management, with nine of the club’s 19 managerial positions (47%) being held by women. In addition, 45% of the club’s trainers and campus coordinators are women.

Here is how club president Faruk Eczacibasi reacted to the award:

“We are thrilled to receive this award because it is not about trophies or international achievements; it’s about the Eczacibasi Sports Club’s decision to reorient its journey, which began with men’s basketball, to women’s volleyball. By allocating all our resources and investments to this field, we made sports more accessible to women and increased the participation of women and young girls in Turkish Volleyball. This IOC award is a tribute to these efforts.”

“Throughout its history of more than 50 years, the Eczacibasi Sports Club has undertaken major efforts to contribute to the development of sports in Turkey and increase the representation of women in every field of sports. Its achievements in the field of Volleyball and success as one of the leading clubs worldwide have played a major role in encouraging young girls to take up Volleyball and making the sport more popular. We are delighted and proud that the IOC has recognised these efforts and that this highly regarded club from our country is receiving this award. I congratulate the entire Eczacibasi Sports Club family for the contribution they made that resulted in this recognition.”

Besides the prize, the IOC also provided Eczacibasi with a $50,000 USD grant for it to continue to implement actions that make volleyball accessible to Turkish women.

Dünyada ilk kez bir spor kulübüne takdim edilen bu ödülü almaktan gurur duyuyoruz! We’re proud of receiving this trophy, which has been awarded to a sports club for the first time in the history!