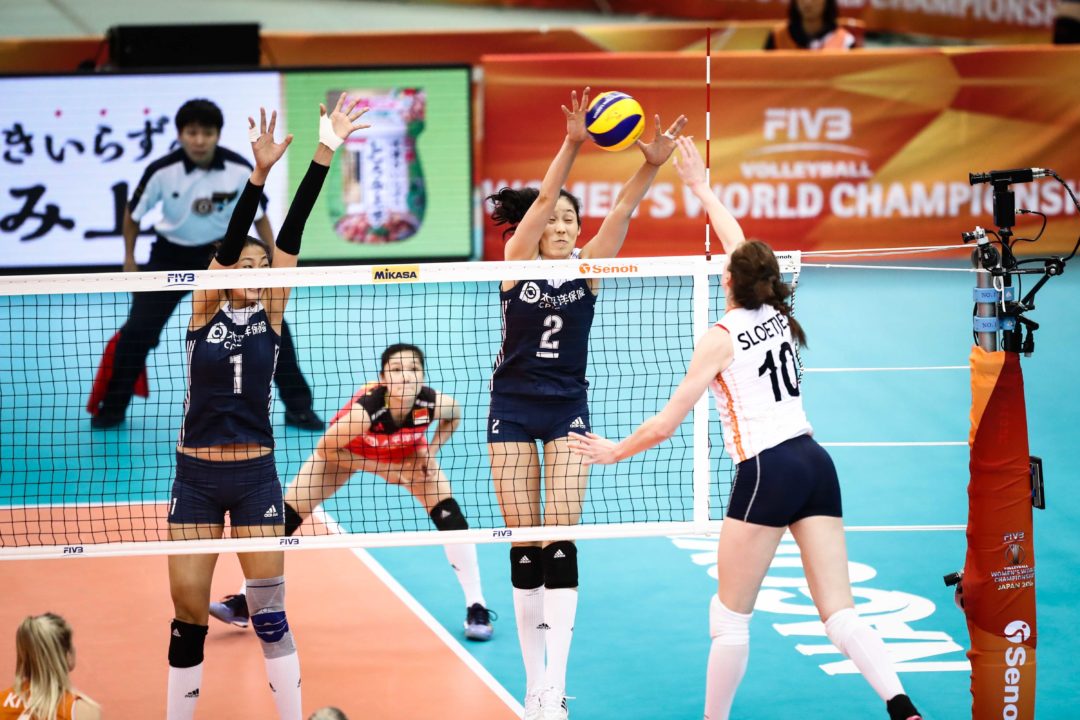 Sloetjes piled up a match-high 26 points, but it was not enough to help the Dutch to victory as China boasted the advantage in every statistical category in rallying for the four-set win. Current Photo via FIVB

The Dutch won the opening set, but China stormed back with three convincing victories to claim the top spot in the semifinals out of Pool H, winning 3-1.

With the win, China will now play the second place team out of Pool G, Italy, in Friday’s semifinals. The Dutch will take on Pool G winner Serbia.

“It was a tough match,” China coach Lang Ping said. “We only have two games left. We have played excellent teams who have given us troubles, but we will prepare in the next two days. Italy is a strong team we will analyze and prepare for the match with them.”

“China played solid, and to beat China you must do everything perfectly,” Dutch opposite Lonneke Sloetjes said. “After two days off we should be better. We will keep fighting.”

Sloetjes managed her 26 points on 22 kills, two blocks and two aces. Anne Buijs was next on the team with 11 points, all on kills, while Yvon Belien followed with eight scorers (6 kills, 2 blocks). Celeste Plak played only as a substitute, managing just two points.

China boasted a two-point edge at 8-6 and 16-14 in Set 1, but Sloetjes knotted the score at 19 and Buijs gave the Dutch a 21-20 advantage. Changning tied it up at 23, but Buijs came through with two kills to close out the 25-23 win, which included eight Sloetjes scores.

China scored five of the first six points in Set 2 and maintained the advantage, going up 16-12 with help from a Changning ace and Gong putaway. Down 19-12, the Dutch called timeout, but that only prolonged the inevitable as China rolled to the 25-13 win.

Set 3 was close early as the teams tied at 6, but China took control from there, going up 18-14 as the Dutch struggled on serve receive and Sloetjes committed a rare error. China capped the set with a 7-4 run.

The Dutch returned to form at the start of Set 4, building a quick 5-2 lead. China countered to tie it up at 7 en route to a 12-8 advantage on a Ting stuff. The Netherlands battled back to tie it at 13, but China outscored them 12-4 down the stretch thanks in part to Dutch miscues. Li Yingying started the set and put down eight points (7 kills, 1 ace) to pace the team, while Sloetjes managed seven scores for the Dutch.

“I was happy with the first set,” Netherlands coach Jamie Morrison said. “It is not easy to play after a five-set victory like last night. We lost focus and could not make plays tonight. You can’t do that against China. We look forward to playing Serbia in the semifinals.”