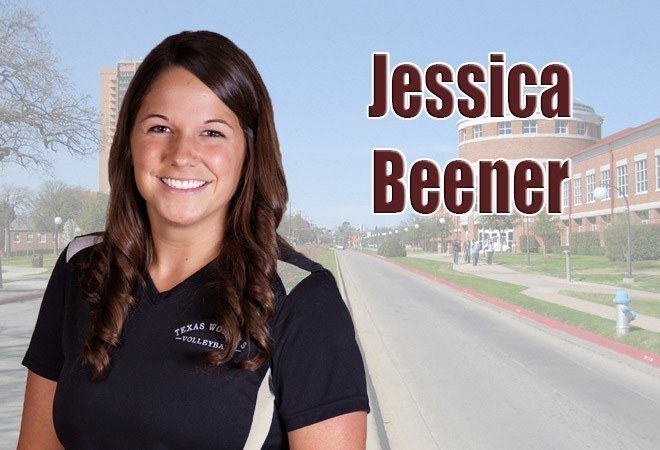 Jessica Beener has been named the interim head coach of the TWU program after the resignation of its head coach. Current Photo via TWU Athletics

As athletes, injuries happen. Unfortunately there’s no other way to put it.

However, eight Texas Woman’s University volleyball players had something worse than an injury- all eight actually developed rhabdomyolysis within a week. A disorder usually associated with sudden extreme activity (Crossfitters often suffer this type of syndrome), rhabdomyolysis involves your muscle tissue breaking down and releasing muscle fibers into your blood – which can lead to kidney failure.

The most common way to get this is from trauma injuries, severe exertion and severe dehydration, according to Medline Plus.

CrossFit is most commonly associated with rhadbo, because of the extreme intensity of the exercise that people’s bodies might not be used to. Jumping into that level of exertion can be a shock to your system.

TWU is a very rare case of high-level athletes all developing this condition en masse. Most athletes’ bodies are in great shape and already well-conditioned for the exercises they’re expected to do.

The week the eight players were hospitalized, the team was taking part in a week of fitness testing starting the day the team reported. In a different twist this year, the team was expected to complete a certain number of reps in a time period instead of time period to finish as many as they could, according to the Dallas Morning News.

The fitness testing lasted from Aug. 15-19, and the first player was hospitalized on the 20th. According to the DMN, dehydration and extreme exertion caused the players to seek medical treatment.

Coach Shelly Barbee resigned the last week of August, but claimed that her resignation did not pertain to the girls’ hospitalization, as she had not attended any practices after taking a leave of absence beginning Aug. 12.

The most common volleyball injuries are things like ankle sprains, finger injuries, rotator cuff tendinitis, ACL injuries and tendinitis in the knee. However, proper training and treatment can heal those injuries.

In cases of more serious issues, like rhabdo, they can have lasting effects beyond athletes’ playing days.

Jessica Beener, who has been an assistant with the program since January of 2013 (plus two seasons as a graduate assistant before that) has been named the interim head coach.