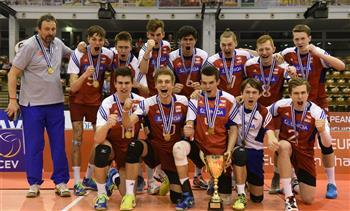 The 2017 CEV U19 Volleyball European Championship – Men has concluded with the Czech Republic winning the event against Italy... Current Photo via FIVB

The 2017 CEV U19 Volleyball European Championship – Men has concluded with the Czech Republic winning the event against Italy in a five-set match.

This is the Czech team’s second medal at the men’s U19 level, with their last coming in 1999 when they won the bronze medal.

In the fifth set of the Czech, Italy match, the score found itself tied up at 12-12 late. Marek Sotola was able to bring in the victory for the Czech with a kill.

The top four teams in the tournament (Czech Republic, Italy, Turkey, and Russia) had previously qualified for the FIVB Volleyball U19 Boy’s World Championships that will be held in Bahrain from August 18-27. The defending world champions, Poland, and France will also join the Europeans in Bahrain.

The European additions round out the remaining teams in the tournament.