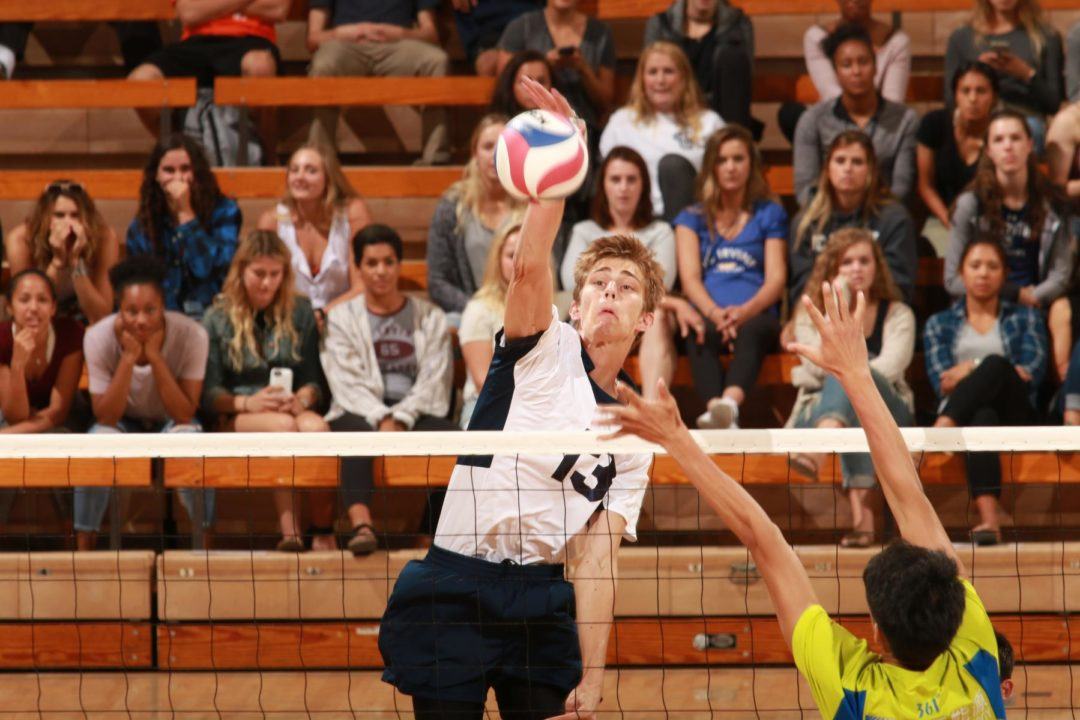 In their opening match of the season, UC Irvine comes out on top over Concordia in a three set sweep.

The first set was a rally opener of itself, with a score of 38-36. The Eagles looks as though they had the set wrapped up at 19-16, but the Anteaters fought back to a 23-22 lead. The remainder of the set was a back and forth battle until the Anteaters concluded the set at 38-36.

Leading the Anteaters offense was Scott Stadick with nine kills on a .444 hitting percentage and eight blocks. Karl Apfelbach was close behind with eight kills and five digs. Leading the back court defense was libero Dillon Hoffman with 17 digs.

To lead Concordia in their losing efforts was Hunter Howell with 11 kills. Taylor Faiduti and Joseph Pillion each contributed four blocks, while Ryan Murphy picked up nine digs.

In the first set, 7-0 freshman Scott Stadick made his presence known quickly recording a block assist and a solo block on consecutive plays as soon as he got to the net, 3-2. The teams remained close until Concordia peeled off three straight to take a 19-16 lead. Senior Tamir Hershko recorded his first kill of the year to bring UCI within 20-18, but then back-to-back Anteater errors gave the Eagles the 22-18 cushion. A kill by Tucker Pikula, a block by Stadick and Karl Apfelbach, an ace by Mattew Younggren, a kill by Stadick and another block by Stadick and Pikula put the Anteaters back on top 23-22.  Enough points to finish another set was played before a Concordia service error was followed by a kill by Apfelbach to give UCI the 38-36 victory. Each team committed seven service errors to lengthen the set.

UCI used kills by Younggren and Hershko plus a Concordia miscue to open a 7-4 lead in the second set. Consecutive Anteater attack errors brought the Eagles to 11-10, but UCI would go on a 6-2 run capped by another Younggren kill to extend the lead to 17-12. A Thomas Hodges ace ended the set, 25-18.

With Concordia leading 15-10 in the third, Hodges took over pounding four kills to get UCI within 16-15. Saeta fired two aces in conjunction with an Eagle setting error to take an 18-16 advantage.  With the score tied 20-20, UCI scored the final five points of the match with Stadick putting away the final two kills, 25-20.