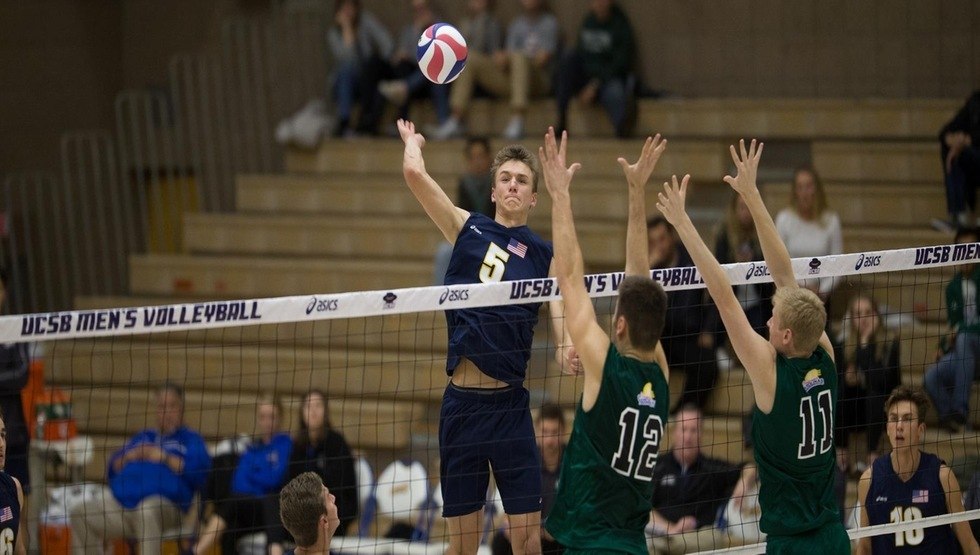 Behind 11 kills on .562 hitting and a career-high five aces from freshman middle blocker Keenan Sanders, No. 13 UC Santa Barbara swept past Lees-McRae on Saturday afternoon to finish off play in the Penn State Tournament, 25-16, 25-16, 25-10.

UCSB improved to 8-10 overall and 4-1 in non-league play with the win, while Lees-McRae dropped to 5-11 with the defeat.

Similar to Friday’s non-conference loss to Penn State, UCSB head coach Rick McLaughlin played a numer of non-regulars in the match. The newcomers performed fairly well, helping the team to a .361 hitting percentage, with redshirt freshman Brandon Hopper putting down eight kills on 11 swings in his first collegiate start.

Lees-McRae struggled to a .068 team hitting percentage, with only two hitters finishing with more than three kills.

UCSB used a 4-0 run in the first to turn a 10-12 deficit into a 14-12 advantage thanks to a pair of kills and a block from Sanders. The Gauchos held on to that advantage until reeling off six straight points behind Roy McFarland‘s serving to close out the set, including a pair of double-blocks from Hopper and Spencer Fredrick (five kills, six digs, four blocks).

Strong serving from McFarland helped UCSB pull ahead in set number two as well, as he led the Gauchos to five straight points to make it 11-7. Later in the frame, back to back aces from Sanders brought it to 19-11. A while later, McFarland chipped in kills on consecutive points to bring up set point, with LMC’s Rudy Klaas serving into the net to end it.

It was all UCSB in the third, as the Gauchos jumped out to a 7-1 lead early and never looked back. UCSB hit a robust .533 for the set, with Sanders contributing six points (four kills, an ace, two block assists) to lead the way.

The Gauchos return to Rob Gym next week for a pair of matches, first against CSUN on Wednesday in a battle between two teams fighting for an MPSF Tournament spot and then against Lewis in a non-conference showdown on Saturday.

Set 1: The Gauchos scored the first point of the set and never trailed after that as they went on to defeat the Bobcats 25-16 in the opening frame. LMC was within three of the Gauchos at 18-15, but UC Santa Barbara went on a 6-1 run to close out the first.

Set 2: LMC led UCSB for the first time in the match in the second. The Bobcats held an 8-7 advantage on the Gauchos but much like they did in the first, the Gauchos went on a little run (7-1 in the second) to gain enough separation from Lees-McRae. UCSB went on to win the second frame, 25-16.

Set 3: In what proved to be the final frame of the match, the Gauchos hit a match-high .533 on 15 attempts while holding Lees-McRae to match-low -.048 hitting percentage. The hot offense by UCSB and the coldness of LMC’s offense led to a 25-10 set victory for UC Santa Barbara.

Stat Leaders: For the sixth time this season, senior John Sobel hit at least .333 as he totaled a team-high nine kills as well. Fellow senior Keenan Freitas paced the Bobcat defense with seven digs. On the block, Reto Pfund totaled a pair of block assists and he also dished out a team-high 22 assists Saturday.

Next Up: Lees-McRae’s next scheduled match is next Saturday when it hosts Lindenwood at 4 p.m. Stay tuned to lmcbobcats.com for updates on the status of this match in the coming days.