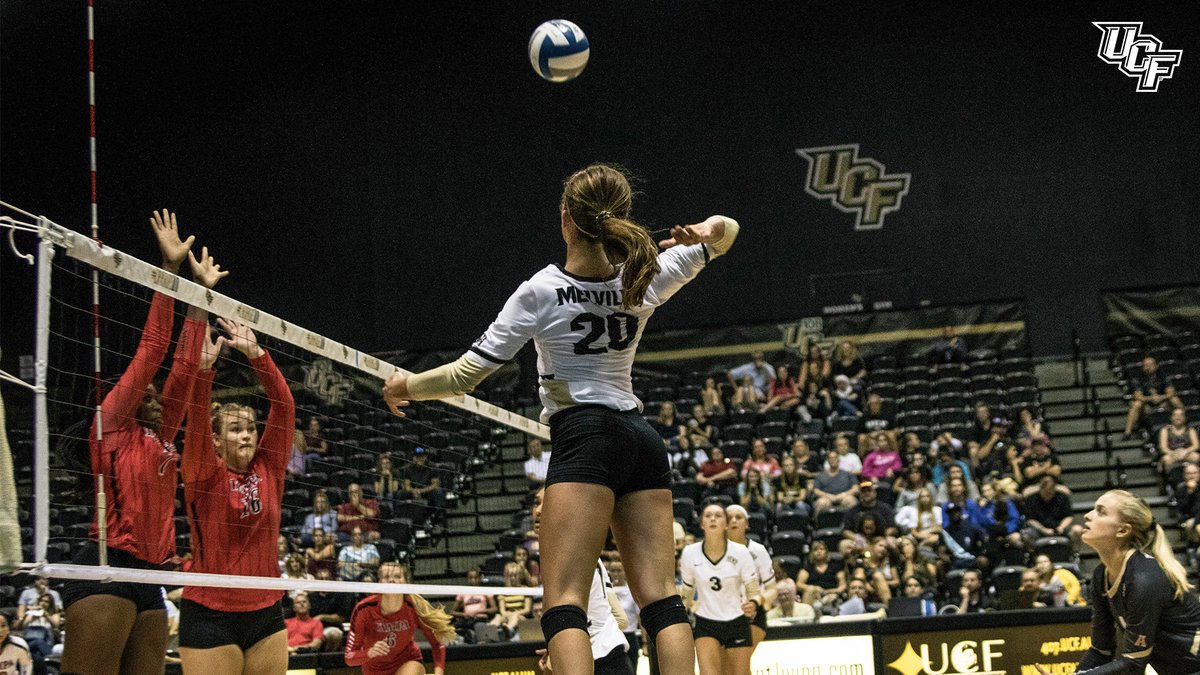 PROVIDENCE, R.I. – The American Athletic Conference has announced the winners of the league’s weekly volleyball honors for the week ending on November 11.

Melville earns her fourth weekly conference honor after leading the charge through a 2-0 weekend. The Knights earned a share of the 2018 conference title after extending its winning streak to 21 matches and remaining unbeaten in conference play with a 15-0 record. Melville pummeled 26 kills and had 20 digs to earn her conference-high 19th double-double of the season in a five-set win against Cincinnati. The Knights’ win over the Bearcats gave them the league’s automatic qualifying spot in the NCAA Tournament. Melville was one kill shy of earning her 10th-straight double-double as she knocked down nine kills and had 11 digs, while the team hit .340 in a 3-0 Sunday sweep of ECU. She averaged 4.38 kills and 3.88 digs per set over the weekend.

Watts earns her second conference honor this season after an impressive performance in the back row. She had a career-high 38 digs in a 3-2 win over fourth-place Tulsa to clinch the season series against the Golden Hurricane on Friday. Her performance is tied for third in a match in The American this season. She returned to the court on Sunday and bumped 14 more digs in a sweep over 2017 champion Wichita State to help her side sweep the season series against the Shockers. Watts averaged 6.50 digs per set over the weekend.

Pingel played a pivotal role in helping the Knights earn their second conference title in five years. She had 22 digs and five assists against second-place Cincinnati on Friday, as the Bearcats were held to hitting below .200 in the 3-2 win. She had four service aces, 12 digs and five assists in Sunday’s title-clinching win against ECU. Her passing efficiency along the back line helped the Knights hit .340 against the Pirates. Through UCF’s two wins, she recorded a .938 reception percentage on 34 attempts and averaged 4.25 digs per set.

Thompson continued her dominant performance at the net in Week 11, averaging 6.88 kills, 7.94 points and 3.38 digs per set. She reached the 30-kill mark for the eighth time this season against No. 22 UCF on Friday. She knocked down 31 kills, while registering 20 digs, three blocks and two service aces in the five-set match. Thompson had 24 kills while hitting .512 with four service aces and seven digs in a sweep at USF on Sunday to keep the Bearcats in contention for a share of the 2018 conference title.

Averaging 4.10 kills and 2.60 digs per set, Parker recorded two more double-doubles over the weekend through a pair of five-set matches. She had 23 kills and 12 digs in a 3-2 win over Memphis and recorded 18 kills and 14 digs against Tulane. She has 11 double-doubles in her rookie campaign.

Heidelberg had a strong performance through two wins to help the Green Wave extend its winning streak to 11 matches. The freshman reached double-digit kills and digs in both wins with 11 kills and 13 digs against Temple and 10 kills and 19 digs against UConn. She hit .404 and had a .926 reception percentage.

Horsfall bolstered the back line for Tulsa, averaging 6.00 digs per set and a .949 reception percentage. After a 30-dig performance against SMU on Friday, she moved up to No. 3 in school history on Sunday in an 18-dig sweep over Houston, tallying 1,596 in her career.