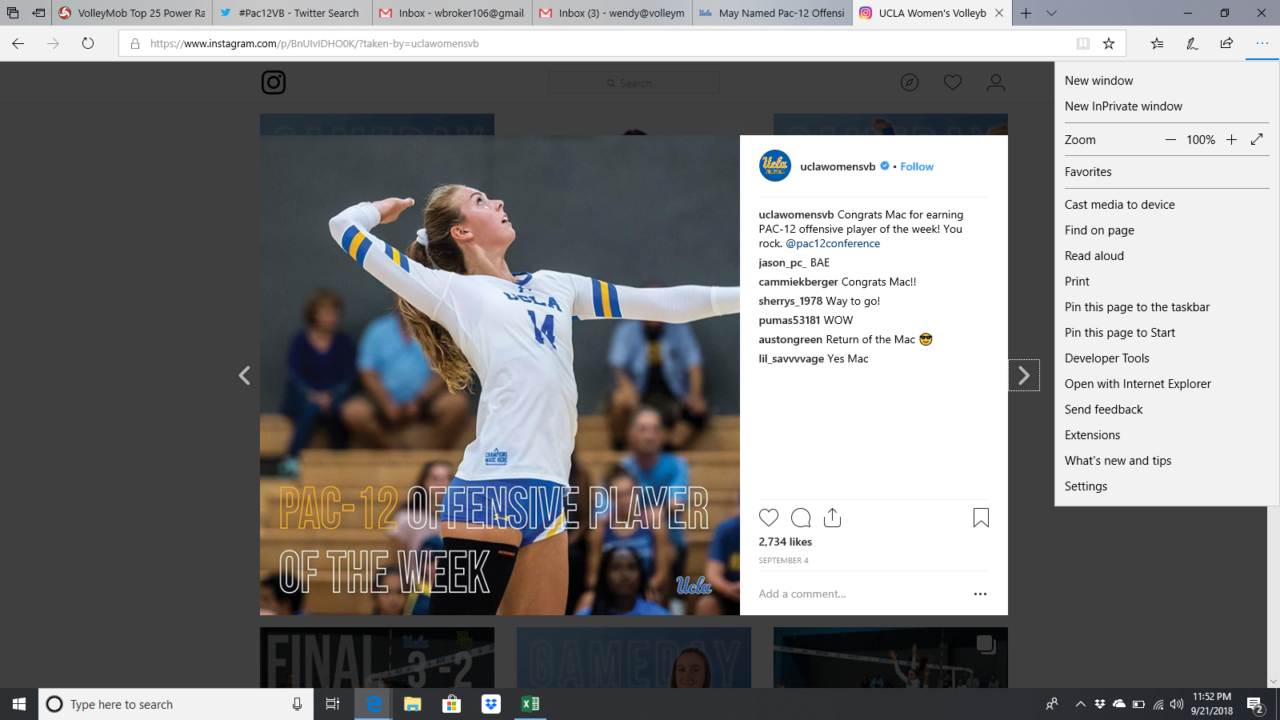 The Utes outserved the Bruins 9-7, but trailed in hitting efficiency and blocks (10-4).

The Bruins move to 18-5 all-time in the series with the Utes, following a Utah two-match sweep in 2017.

Sophomore outside hitter Mac May turned in a 16-kill, 10-dig double-double to lead the Bruins. Sophomore outside Jenny Mosser (11) and junior middle blocker Madeleine Gates (10) also registered d0uble-figure kill tallies. Gates and senior middle Kyra Rogers put up five blocks apiece, while junior setter Kylie Miller paced the team in the backcourt with 22 digs to go with her 41 assists.

UCLA pulled away in Set 1 after a tie at 5, going up 10-6 with two Mosser kills and two Ute miscues. Utah caught up at 12-all, but a block and three putaways had the Bruins back up four at 16-12, giving the team a lead it would not relinquish. A Gates putaway gave UCLA the win on its second set-point try.

Utah turned the tables in Set 2, cruising to a 10-1 lead with four Drews kills and three Bruin errors. UCLA never got closer than six the rest of the way, only doing that by thwarting two set point tries, before Choy ended the stanza at 25-18.

The Bruins raced ahead 12-5 in Set 3 with help from six Utah errors. The Utes chipped away and eventually tied the score at 22, rallying from down eight at 19-11. Aces by Evans, Choy and Brianna Doehrmann highlighted the rally, as did two kills and a block by Grace. Down 24-23, kills by Gauta and Drews gave Utah a shot at the set. A kill by May and an ace by Savvy Simo gave UCLA a try at 26-25. The teams tied at 26 and 27 before the Bruins put it away at 29-27 on a Mac kill and a stuff by Rogers and Zana Muno.

UCLA carried the momentum into Set 4, cruising to a 5-0 lead and on to a 13-5 advantage. Four Utah miscues and aces by Simo and Mosser led the way for the Bruins. A hitting error slowed UCLA momentarily at 14-7, but it was nearly all Bruins from there, beginning with a 6-0 run and two more aces by May. UCLA had its first match-point try at 24-10. A block, a kill and a hitting error kept Utah alive, before a Mosser kill ended the night at 25-13.