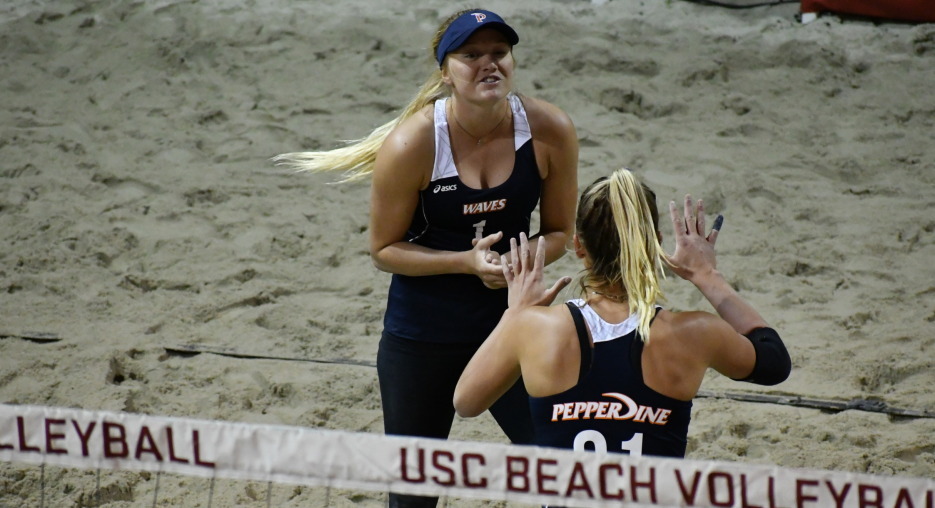 UCLA and Pepperdine's beach squads have both taken down the top team in the nation USC on Wednesday. Current Photo via Pepperdine Athletics

UCLA and Pepperdine’s beach squads have both taken down the top team in the nation USC on Wednesday. This is the first time that USC has lost two consecutive home matches since the beginning of the program in 2012. Additionally, it is the first time they have lost two in a row since 2013.

All three matches for the night ended in 3-2 results with UCLA escaping with the 2-0 record for the day while Pepperdine split their matches.

UCLA’s #1, #2 and #5 pairs won both of their matches for the night while the #3 and #4 pairings struggled, falling in both matches. The Bruins win over the Trojans was just the second time in program history that they have taken down the three-time defending national champions.

Sarah Sponcil and Lily Justine came to play today. They got the job done to help @uclabeachvb get the win over Pepperdine. #Pac12BVB pic.twitter.com/1FeTzqrA12

For Pepperdine, their win over the Trojans came down to a three-set battle at the #2 squad as the other four pairings had tied things up with the Waves #4 and #1 teams winning their matches while the #3 and #5 lost. This was some deja vu from the 2017 NCAA Championships as the final court between the two teams was tied up at 13-13 in the third set. Deahna Kraft/Corinne Quiggle flipped the script this time with the three-set victory in a tight battle to the end, winning 15-13 in the third. The win over USC was their first since the start of the 2016 season. Their loss to UCLA came in a close finish, as well, with the Bruins #2 pair Lily Justine/Sarah Sponcil clinching the win over the Waves Brooke Bauer/Madalyn Roh in straight sets.

For Pepperdine, Skylar Caputo/Alexis Filippone have remained unbeaten so far this season with a 5-0 record.

The three teams will have to face one another this Saturday on Zuma Beach when Pepperdine hosts the tri for a quick turnaround rematch.

Scores from the night