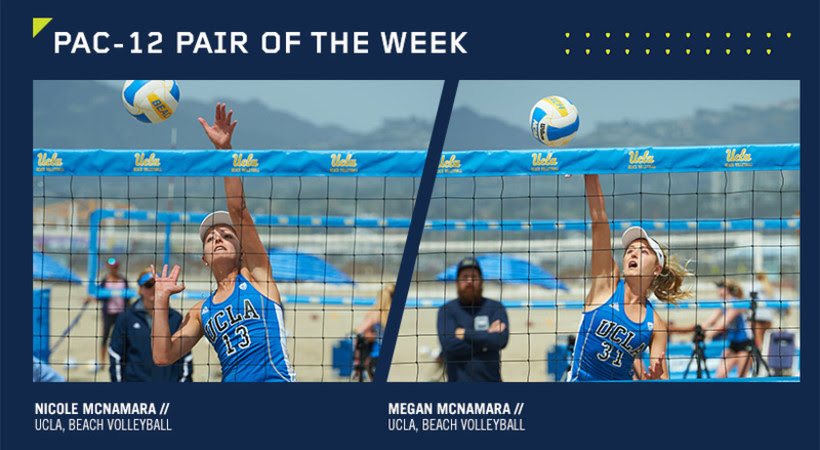 Pair of the Week: Megan and Nicole McNamara, UCLA
• Went 6-0 on the week helping #3 UCLA go 6-0, as well, to improve to 25-2 on the year, stretching the Bruins’ school-record winning streak to 23 duals.
• The identical twins are now 23-3 on the year, all on court one.
• UCLA defeated four ranked teams during the week as the McNamara twins had three of the six decisive dual wins.
• Won in three sets in the dual vs. #5 Long Beach State on Sunday as the Bruins claimed the close victory, 3-2, keeping UCLA’s winning streak alive.
• The Bruins also defeated #8 Arizona, 4-1 on Sunday in the Battle at the Beach at Ocean Park in Santa Monica, Calif. On Saturday, UCLA defeated Washington, 4-1, and Concordia, 5-0, to open the Battle at the Beach. The week began with UCLA picking up a 4-1 win over No. 20 Cal Poly and a 5-0 victory over No. 20 LMU on Wednesday, in UCLA’s first and last duals on campus on the year.
• It is the second time this season the twins have been voted Pac-12 Pair of the Week.