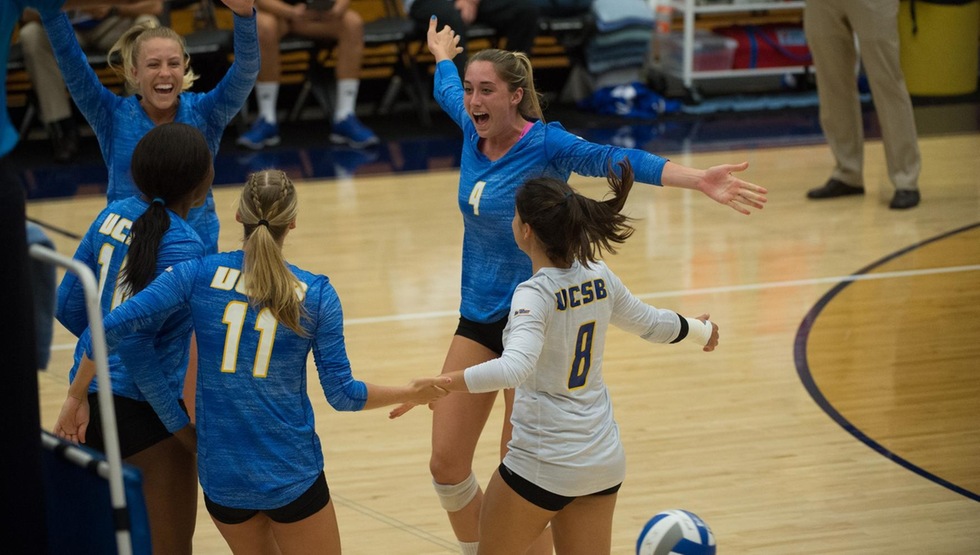 For the second straight September, the UC Santa Barbara has garnered a sweep of the Big West Athlete of the Week awards with Lindsey Ruddins, Emilia Petrachi and Olivia Lovenberg being honored by the conference. Current Photo via UCSB Athletics

SANTA BARBARA, Calif. – For the second straight September, the UC Santa Barbara Women’s Volleyball team has garnered a sweep of the Big West Athlete of the Week awards, it was announced Monday afternoon.

Ruddins was on fire from the get-go at the Denver Classic this past weekend, averaging 5.00 kills per set on the way to 60 kills and a .227 hitting percentage. She also had 35 digs (2.92 D/S) and nine blocks (0.75 B/S), racking up two double-doubles for the second straight week.

In the opening match of the weekend against tournament host Denver, Ruddins finished with 27 kills (.300), tying a season-high. It was her eighth career 27-kill performance, tied for No. 11 in the UCSB rally scoring charts. She also had 12 digs and season-highs of four total and two solo blocks. Ruddins went on to tally 15 kills and 14 digs against Sacramento State before closing the week with 18 kills and nine scoops in the Gauchos’ 3-1 win over McNeese State.

Emilia Petrachi
Senior libero Emilia Petrachi had at least 20 digs in all three matches in Denver, including a career-high 30 in the win over McNeese State. She posted at least 4.00 digs per set in each contest, averaging 5.83 overall.

Following a 20-scoop (4.00 D/S) performance at Denver, Petrachi went for 20 in three sets (6.67 D/S) against Sacramento State. She closed the weekend averaging a season-best 7.50 digs per game against the Cowgirls, reaching the 30-dig mark for the first time since her freshman season. Petrachi also added six assists and one ace for the weekend.

Petrachi now owns six of the program’s eight Defensive Player of the Week awards since 2014. For her career, she has just one fewer than last week’s winner, UC Davis libero Malia Bolko, who owns the conference record with seven.

Olivia Lovenberg
Lovenberg claims her second straight Freshman of the Week honor after setting up the Gaucho offense to the tune of 12.42 assists per set. She had at least 40 helpers and eight digs in all three matches, adding two more doubles to give her a total of four through her first six career outings.

The freshman was huge down the stretch in Friday’s match against Denver, playing a part in 17 of the Gauchos’ final 23 points in a frantic fifth-set finish. She ended her day with 10 digs and a season-high 55 assists – good for the second-highest total in the Big West this season – along with personal-bests of four kills (.800) and three blocks.

After going for 40 assists, eight digs and tallying her first three career aces against Sacramento State, Lovenberg’s numbers would once again explode against McNeese State, when she finished with 54 helpers (13.5 A/S) and 11 digs in just four games.

The San Diego, Calif. native Lovenberg now leads the conference in assists per set (10.88 A/S) and total assists (272). To put that in perspective, UC Riverside’s Chelsea Doyle (238 assists, 10.35 A/S) is the only other player in the conference to have over 200 assists or to average more than 9.00 assists per set at this juncture. Lovenberg now has three 50+ assist efforts through six matches this year – the rest of the Big West has two.