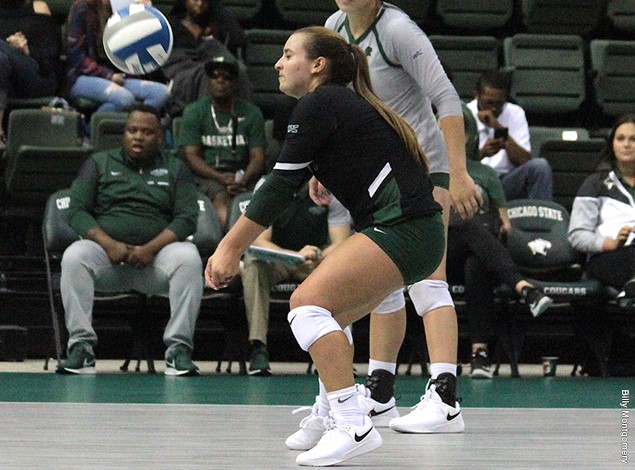 DENVER – Kansas City senior middle hitter Tyrecia Lukes and Chicago State junior defensive specialist Megan Klavitter have been named the Western Athletic Conference Offensive and Defensive Volleyball Players of the Week, respectively, for the week of Aug. 20-26. This is the first-ever WAC Player of the Week honor for either.

Lukes, a Miami, Fla., was named to the all-tournament team at the UMKC Invitational after averaging 5.00 kills per set on a blazing .542 hitting to lead the WAC with 5.29 points per set. She also added 0.50 blocks per set. Lukes opened the week with 13 kills on .684 hitting in a sweep of South Dakota State and followed it up with 22 kills on .688 hitting in a four-set win over Western Michigan. She closed the weekend with a career-high 25 kills to go with five blocks in a five-set heartbreaking loss to Austin Peay on Saturday.

Congrats to @Tyrecialukes21 for being @WACsports offensive player of the week! She comes off a stellar performance in the UMKC Invitational with an average of 5 kills per set leading the WAC. On top of that, she had a career-high 25 kills in the closing game. #TeamKC #RooUP pic.twitter.com/yH8Hiy2uv0

Klavitter, a Fenton, Mich., native, earned all-tournament team honors at the Cal Molten Classic after averaging 5.91 digs, 0.91 assists and 0.36 service aces per set last weekend. She produced 17 digs and two assists in the Cougars’ season-opening contest against host California before tallying a career-best 32 digs to go along with five assists and two service aces in a five-set battle against Colgate. In the team’s first-ever win over a Big Ten program, a sweep of Rutgers, Klavitter posted a match-high 16 digs to go along with three assists, two service aces and two kills.