Iranian captain Saeid Marouf was not expected to play in this tournament because of injury; now, he's led his team back to the semi-finals. Archive Photo via FIVB

The classification matches began on Sunday in the men’s tournament at the 2018 Asian Games, with a unique 12-team bracket leading us two 2 teams advancing to the semi-finals, plus another 4 advancing to the quarterfinals. 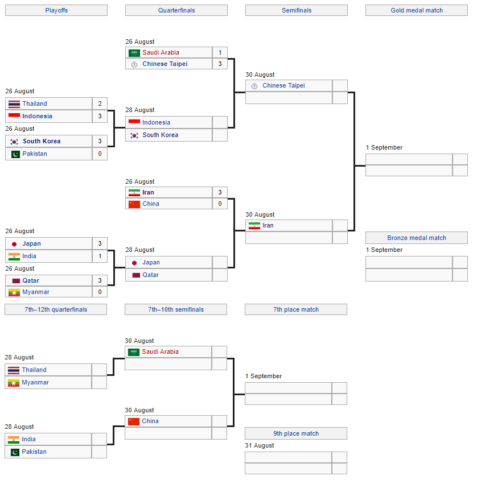 After Saudi Arabia miraculously stole a set, Chinese Taipei (aka, Taiwan) won the next 3, including the 3rd by a 17-point margin, to advance to the semi-finals. There, they’ll await the winner of Indonesia and South Korea, which will be played on Tuesday. Taipei was led by 16 from Hongjie Liu, including 4 blocks. Saudi Arabia’s top scorer was Ibrahim Majrashi with 12. While Saudi Arabia out-blocked Taipei 13-9, Taipei had 3 aces to none for the Saudis. Saudi Arabia also had 33 errors in the match.

Defending champions Iran remained undefeated in the tournament and swept China away, just as they did in the 2014 semi-finals, 3-0. Iran will now play the winner of Japan and Qatar (both of whom are also undefeated) in that semi. Amir Ghafour led Iran in scoring with 17. While Iran wasn’t serving exceptionally hard in the match, it was still enough for 8 aces – including 3 for Ali Shafiei, and 5 playesr with 1 each.

Indonesia jumped out to an early lead, using their starting 6 religiously, before Thailand made some big 2nd set changes to force a tiebreak. Thailand’s leading scorer was opposite Amorntep Konhan with 21 – in spite of not entering the game until deep in the 2nd set. Kantarat Koonmee also added 10 for Thailand in spite of not starting. Indonesia had two players with over 20 points: Rendy Febriant Tamamilang and Tivan Nurmulki, who tied with 18 kills each. Nurmuli also added 3 aces in the match. A 15-block Indonesian effort was led by 6 from Yuda Mardiansyah Putra. Indonesia will play South Korea on Tuesday.

Kwangin Jeon had 18 and hard-hitting Sungmin Moon had 19 to lead South Korea past Pakistan and into the quarterfinals. Moon had 14 kills, 2 blocks, and 2 aces for a balanced performance. South Korea played a very clean game, giving up just 17 points on errors while still managing to hit 52.7% Pakistan only had 14 errors, while hitting 44.8%, but struggles on floor-defense, and a lack of any real service threat (Korea led in aces 6-0), kept Pakistan from ever really getting into the match. South Korea will play Indonesia on Tuesday

21 from Indian star Prabagaran (61.8% hitting) wasn’t enough to combat 28 from Japan’s Shunsuke Chijiki (60.9% hitting), as defending silver medalists Japan rolled to a 4-set win. The rest of the Indian team combined to hit just 41.9%. In true Japanese fashion, the team had 28 digs in the match and 62.34% success in reception – both high numbers for men’s volleyball. That includes 18 digs from libero Ryuta Homma, who also had an otherworldly 88.46% excellent reception rate. Japan will play Qatar on Tuesday, with the winner advancing to the semi-finals.

Qatar barely broke a sweat in overwhelming Myanmar in 73 minutes to keep their undefeated tournament alive. Mubarak Hammad had 13 points in the match, and Qatar as a team hit 54.8%. Ibrahim Ibrahim had 4 aces for the winners. 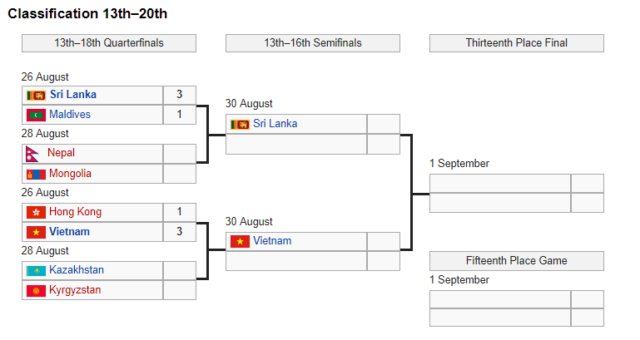