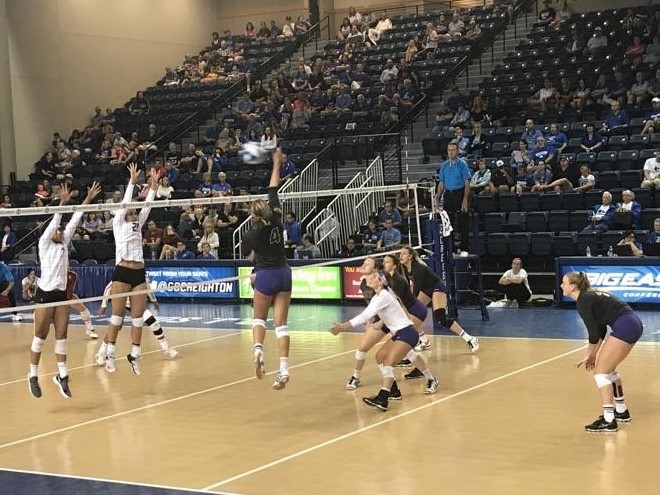 UNI shocked the volleyball world by taking down #18 ranked USC in four sets after the Trojans just made their way into the top-25.  Current Photo via UNI Athletics

UNI shocked the volleyball world by taking down #18 ranked USC in four sets after the Trojans just made their way into the top-25.

The first set of the match was a back and forth battle to the end, with 14 ties occurring and the last coming at 24 all, before a UNI blocks by Heather Hook and Piper Thomas brought the Panthers within one of winning with the final point coming on a Trojan attack error.

UNI kept a lead in the second set over the Trojans, but they came back late to tie things up at 24 all, then 25, 26, 27 and finally at 28 before the Panthers put up a strong block followed by Karlie Taylor kill that gave UNI the 2-0 match lead. The third set was a turnaround set for the Trojans as they took a lead and kept it out of reach to bring the match to a 2-1 record.

The final set of the match featured a number of ties before UNI put down two straight kills by Hook and Taylor to collect the upset.

Leading the upset charge for the Panthers was Taylor and Thomas with 20 kills apiece while Thomas added five blocks to her tally and Taylor picked up 12 digs for a double-double. Setter Hook dished out 50 assists and eight kills. In the back row, Bri Weber and Kendyl Sorge picked up 18 and 14 digs, respectively.

The University of Northern Iowa volleyball team scored the program’s first ever win over the University of Southern California at the Bluejay Invitational hosted by Creighton University, 3-1.

The Panthers were paced by 20-kill efforts from Piper Thomas and Karlie Taylor. It is the second time this season that UNI has had two players reach 20 or more kills in the same match. Thomas added a team-best five blocks. Taylor tallied her third double-double of the year with 12 digs.

UNI senior setter Heather Hook posted 50 assists and 10 digs for her second double-double of the season.

Junior Bri Weber was credited with a season-high 18 digs.

UNI will be back in action on Saturday with matches against Kentucky (10 a.m.) and Creighton (8 p.m.).

The 18th-ranked USC women’s volleyball team (3-1) had its three-match winning streak snapped by Northern Iowa (4-0) in the opening contest of the 2017 Bluejay Invitational presented by First National Bank at D.J. Sokol Arena on Friday, Sept. 1. The four-set loss (26-24, 30-28, 17-25, 26-24) was the first time the Women of Troy have lost to the Panthers and was also the first time in the four-year run of this tournament that the Trojans have suffered a loss.

USC’s pin-hitters each reached double-digit kills led by senior opposite Brittany Abercrombie who had career highs with 16 kills (3e, 25att) and a .520 hitting percentage. Sophomore outside hitter Khalia Laniertallied 15 kills (2e, 39att, .333) and had three service aces, nine digs, and three blocks for 19.5 points. Senior opposite Niki Withers added 10 kills (6e, 34att, .118) with a career-best seven blocks. Junior outside hitter Alyse Ford also had 10 kills to go with five digs and a pair of blocks.

For Northern Iowa, Karlie Taylor and Piper Thomas each had 20 kills apiece to lead the way. Both hitters put up plus-.300 hitting rates while Taylor had a double-double with 12 digs. Thomas led her team with five blocks.

In all, the score was tied 41 times through the entirety of the match. The first set alone had 15 ties and seven lead changes, but the Panthers grabbed the lead when it mattered most and finished off a 26-24 win to claim just their second set ever against the Trojans. The Women of Troy led for nearly the entire second set and had set point at 24-21, but UNI never stopped fighting and pushed USC into extra points where they went on to nab a 2-0 lead in the match with a 30-28 win.

The Trojans started out back and forth with the Panthers in the third, but pulled away to lead by as many as nine points. Despite a couple of missteps down the stretch, the Women of Troy completed a decisive 25-17 win to get on the board. The final frame was tied 18 times in all, but USC had its ever-fleeting opportunities even at 23-21. The Panthers roared back but USC still had one more chance before UNI shocked the Trojans with the final point of another 26-24 win.