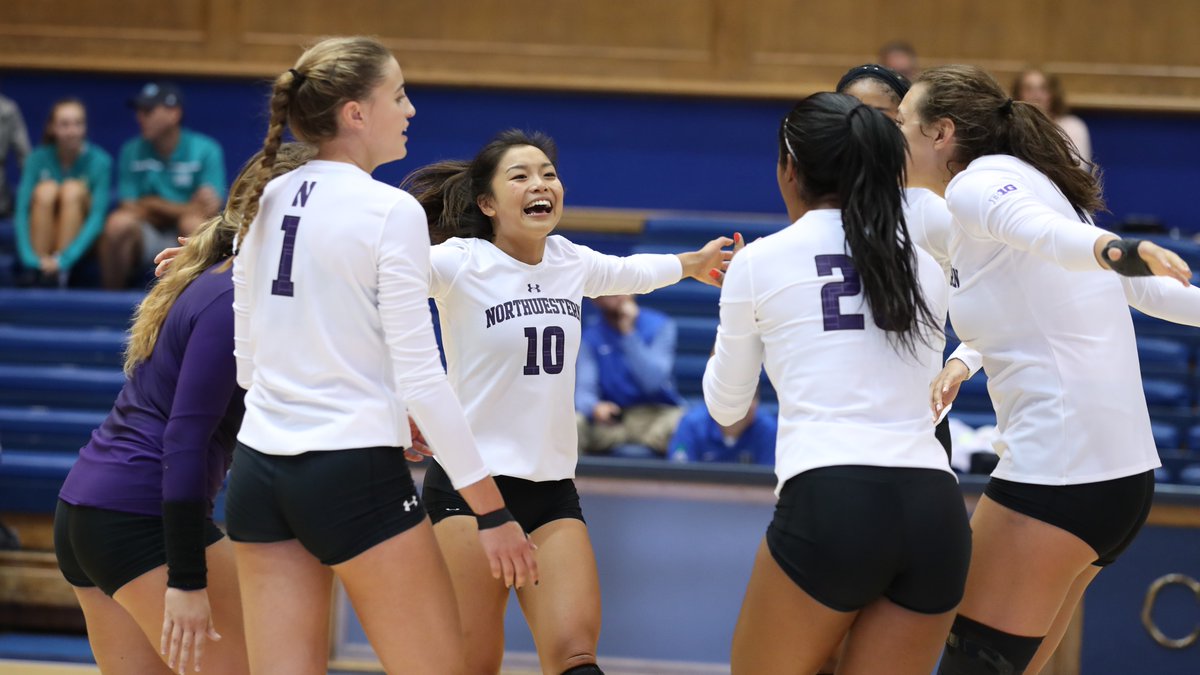 Senior outside hitter Symone Abbott and freshman outside Nia Robinson put down 15 points apiece and Northwestern hit at a .394 clip as a team in a sweep of Northwestern to kick off the Duke Invitational on Friday.  Current Photo via Northwestern Athletics

Senior outside hitter Symone Abbott and freshman outside Nia Robinson put down 15 points apiece and Northwestern hit at a .394 clip as a team in a sweep of Northwestern to kick off the Duke Invitational on Friday.

Northwestern hit .433, commiting just two errors in the opening stanza, and followed with .364 and .389 efforts.

Robinson hit at a .500 clip, while Abbott checked in with a .325 effort for the Wildcats. Senior middle blocker Gabrielle Hazen managed an eye-popping .700 clip, with eight kills and one error in 10 attempts. Hazen led the team with four stuffs, while Abbott added three. Freshman libero Lexi Pitsas paced the defense with 11 digs.

Duke scored the first three points of the night and boasted the advantage until Northwestern managed a 5-1 run to grab a 12-10 edge. Two Abbott kills and two Duke miscues aided the Wildcat effort. The Wildcats held the Blue Devils at bay until the latter managed a 3-0 run toturn a 19-17 deficit into a 20-19 lead. Northwestern answered the call with a six of the final seven point to close out the set. Three Abbottt putaways and a block by Hazen and Robinson set up the final kill from Hazen.

The Wildats were on the short end of an 15-9 score in Set 2, as Meyer added two kills and a block and Duke benefitted from six NU miscues. Down 20-15, Northwestern began its comeback with a 6-0 run, including an Amy Wang ace and two blocks by Ivey Whalen that gave the Wildcats a 21-20 lead. A pair of Abbott kills set up the Wildcats’ first set point chance at 24-22 and Sarah Johnson came through with an ace to give Northwestern the set and a 2-0 lead.

Northwestern managed a two-point advantage early in Set 3, boasting a 12-10 edge as the teams traded points. The Wildcats boosted the margin to five at 17-12 as Robinson added two kills and Duke gave away three points on errors. Three Abbott putaways and one from Hazzen made it 21-16, but the Blue Devils narrowed the gap to one at 23-22 as Meyer turned in three kills and Schwantz chipped in two. A Robinson kill put Northwestern on the hill and a block by Abbott provided the final nail in the sweep.

The Blue Devils, who received 10 votes in the most recent AVCA poll, were felled in part by the sustained hitting percentage performance of the Wildcats (4-1). Northwestern sustained a season-best .394 clip after committing only nine attacking errors.

This was the second match of the day in which Northwestern topped an undefeated opponent and the fifth-straight contest this season in which the ‘Cats have posted a higher hitting percentage than their opponent.

Northwestern was able to do what they weren’t able to do against South Carolina — win the first set. Led by a phenomenal .433 clip in the match opener, the ‘Cats topped Duke, 25-21. Hazen had a pair of digs and a pair of blocks in the effort.

Despite NU’s proclivity toward getting a lead in the first set, the ‘Cats were barren in that prowess in the beginning of the second set as Duke quickly and decisively took a 15-9 advantage. Northwestern continued to trail until later in the match, when a Blue Devil attack error gave NU the 21-20 edge.

The score would remain back-and-forth until a Symone Abbott kill and a Sarah Johnson ace put the second set in the Wildcats’ favor, 25-22.

In the third set, Hazen, Abbott, and Robinson combined for 14 kills in another back-and-forth affair. The Blue Devils attempted a late run but were met with strong resistance by the #B1GCats, who finished the set with a 25-22 final.

The Wildcats will play North Carolina-Wilmington Saturday morning at 11 a.m. CT as NU seeks to finish the Duke Invitational with an unblemished, 3-0 mark. The match, like all the rest in Durham, will be streamed on WatchESPN.

NOTABLE: After recording a .471 hitting percentage in Friday’s opener against South Carolina, Nia Robinson upped the Wildcats’ mark of best attack percentage (min. 12 kills) this season with her .500 performance … Symone Abbott‘s and Nia Robinson‘s 15 kills are tied for the most in a three-set match this season for Northwestern … Symone Abbott‘s .325 hitting percentage was a season best … As of the evening of Sept. 1, Abbott’s 4.22 kills per set rate is tops in the Big Ten (min. 10 sets) … Lexi Pitsas tied her career-high with 11 digs … The Wildcats improve to 2-0 in black jerseys.

Duke was unable to match Northwestern outside hitters Symone Abbott and Nia Robinson, falling to the Wildcats 3-0 (25-21, 25-22, 25-22) Friday evening in Cameron Indoor Stadium.