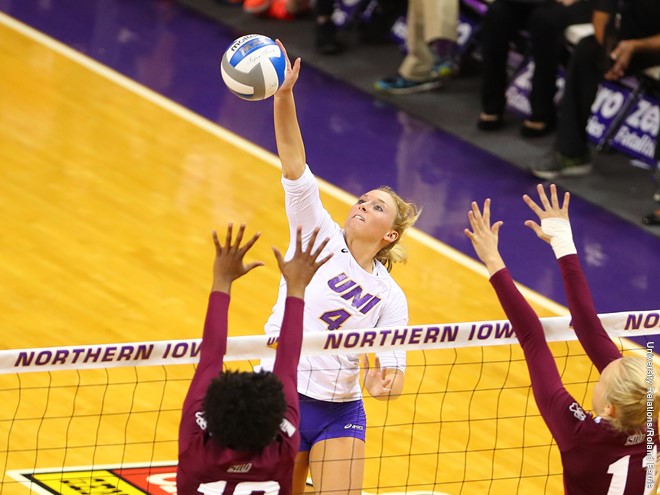 DES MOINES, Iowa – UNI defeated Drake, giving the Panthers their 42nd straight win over the Bulldogs, on Saturday night in the Knapp Center. This wraps up Missouri Valley Conference play and the tournament will begin next weekend.

The Panthers hit .246 on the night with 47 kills with help from setter, Heather Hook, with 31 assists. Drake pounded 42 kills on a .173 clip at the aid of setters, Paige Aspinwall and Sara Jensen, with a combined 31 assists. Both teams recorded 7 blocks.

Bri Weber paced the Panthers with 14 kills on a .244 clip and 7 digs. Karlie Taylor added 12 kills on a .308 clip to go with a team high 15 digs for a double-double. Piper Thomas also had double-figure kills with 10, hitting .258. Odessa Cody and Cathryn Cheek led the offense for Drake with 12 kills a piece. Cheek just missed a double-double, with 9 digs, and Cody hit an impressive .370.

Both teams will continue with play in the Missouri Valley Conference Tournament next weekend.

DES MOINES, Iowa – The University of Northern Iowa volleyball squad wrapped up the regular season with a 3-0 victory over the Drake Bulldogs in the Knapp Center. UNI won by set scores of 25-17, 28-26, 25-19.

Bri Weber tallied a match-high 14 kills and Karlie Taylor notched her 22nd double-double of the season with 12 kills (.308) and 15 digs.

Drake had an opportunity in the second set to draw even when the Bulldogs took a 15-10 lead. However, the Panthers ran off an 8-3 run to tie the set at 18-18. Drake held a set point at 24-23, but a kill from Jaydlin Seehase tied it up at 24-24. The Panthers finally captured the set on their third set-point of the stanza at 28-26 on a solo block by Piper Thomas.

The third set was tied at 13-13 before the Panthers used a 4-0 run to take control of the set. Drake pulled within two points at 17-15 and 18-16, but could get no closer as the Panthers closed out the three-set triumph.

NOTES: UNI’s next action will be at the 2017 MVC Tournament set for Nov. 23-25 in Normal, Illinois … UNI will be the No. 2 seed and will receive a bye into the semifinals … UNI’s semifinal match on Friday will be 7:30 p.m. in Redbird Arena taking on the winner of the match between No. 3 Illinois State and No. 6 Valparaiso … UNI holds an 80-12-2 all-time record against Drake … UNI has won 13 straight sets against Drake.

DES MOINES, Iowa – The Drake University volleyball team fell to in-state foe UNI, 3-0, Saturday evening in the Knapp Center in the regular-season finale for both teams.

The Bulldogs were led by senior Odessa Cody (Chicago, Ill.) and junior Cathryn Cheek who both put up a team-high 12 kills. In one of her best performances of the season, Cody recorded her season-best kills on 27 attacks to hit .370 in her final match at the Knapp Center.  Cheek recorded a career-high six blocks while just missing a double-double with nine digs.

The Bulldogs will travel to Normal, Ill., for their first MVC Tournament appearance since 2010. The tournament is scheduled to take place Nov. 23-25. Drake opens the tournament Nov. 23 as the No. 4 seed against No. 5 Indiana State at 5 p.m. The opening match will be broadcast on The Valley on ESPN3.