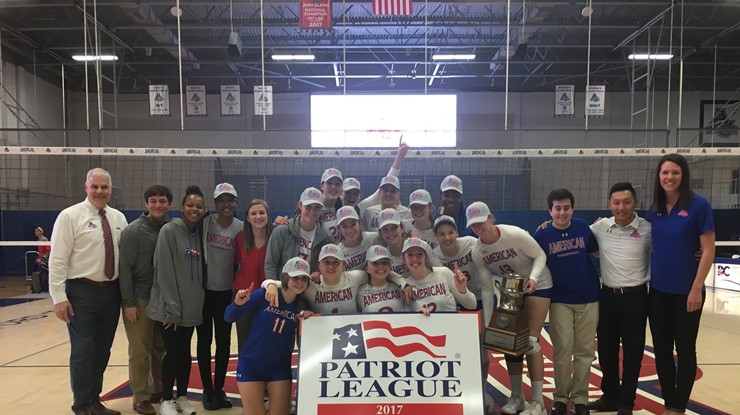 American earned the automatic bid from the Patriot League in a sweep over Navy Sunday afternoon. Current Photo via American Athletics

WASHINGTON, D.C. – For the fifth straight season and their 15th time in 17 seasons since joining the Patriot League, the American University Eagles earned the automatic bid to the NCAA Tournament by sweeping 2-seed Navy Sunday afternoon, 3-0 (25-17, 25-14, 25-22). Additionally, AU has never lost a Patriot League tournament match at home (30-0). American knocked off the Mids, who was the only team to defeat AU in conference play this season.

American was led by PL Tournament MVP Aleksandra Kazala who had 18 kills, 4 digs, 3 blocks and hit .432 against Navy. She was joined on the All-Tournament team by teammates Kennedy Etheridge (match-high 38 assists, 9 digs) and Vela McBride (6 kills, 3 blocks, 2 digs, 2 assists). Libero Kristen Largay dug a match-high 17 balls. Cheyenne Orsi led all blockers with 5 blocks and added 9 kills to the American attack.

Navy (RPI: 76) made the championship match of the Patriot League for the first time since 1999 and its third time ever. The Mids were led by All-Tournament honorees Tara Dotzauer (team-high 10 kills) and Patricia Mattingly (team-high 23 assists, 5 digs). Libero Sydney Shearn scooped a team-high 11 digs. The win over AU earlier in conference play was the first win over American since 1989, and Navy also tied their Division 1 win record with 23.

The top-seeded Eagles won their 18th straight match and improved to 26-7 overall. The second-seeded Midshipmen fell to 23-8.

Kazala was named the Tournament MVP and joined teammates Kennedy Etheridge and Vela McBride on the All-Tournament Team. Navy’s Tara Dotzauer, who had a team-high 10 kills in the final, and setter Patricia Mattingly also were All-Tourney picks.

Lehigh libero Emily Develle and Army West Point middle Rachel Gearon were the other selections on the All-Tournament Team.

Shannon Webb and Helena Elbaek each added nine kills for American, which got 38 assists from Etheridge. Libero Kristen Largay had 17 digs for the Eagles, with Megan Crush finishing with 11.

American won its 15th volleyball title in its 17 years of membership in the Patriot League. The Eagles extended their record to 30-0 in PL Tournament matches played in Bender Arena. The PL title is AU’s fifth straight.

WASHINGTON, D.C. –– Top-seeded American posted a 3-0 victory over the second-seeded Navy volleyball team Sunday afternoon at Bender Arena in Washington, D.C., in the championship match of the Patriot League Tournament. The 25-17, 25-14, 25-22 victory by the Eagles (26-7) over the Mids (23-8) sends them to the NCAA Tournament for the fifth year in a row and the 15th time in American’s 17-season membership in the Patriot League.

Navy was appearing in the finals of the tournament for the first time since 1999 and just the third time in school history (1996), while American has reached the championship match in each of its 17 seasons in the league.

“We offer our congratulations to American head coach Barry Goldberg and his team,” said Navy head coach Larry Bock. “They are once again very worthy champions of our league. They played beyond great today.”

“That may have been the best match we played all season,” said Goldberg. “But we knew we had to be at our best to compete with Navy today. We really had to zero in on everything to be successful.”

American jumped out to a 4-0 lead at the start of the first set, with two-time league player of the year Aleksandra Kazala accounting for three of those four points on kills. Navy would cut the margin down to two points at 10-8 and again at both 14-12 and 15-13. The Eagles followed with a 6-2 run that gave them a 21-15 advantage, which was enough of a cushion for them to claim the first set.

Navy had a better start to the second set than it did in the first set. The score was tied at 4-4, but that was followed by a 3-0 run by American. The Eagles then extended their lead out to 12-7 and maintained a lead of at least four points over the rest of the stanza.

The third set featured the score being tied nine times and the lead changing hands on four occasions. The teams essentially played point-for-point until American took a 17-14 lead. Navy answered with a 4-0 run to take an 18-17 advantage. The score would be tied at 20-20 after which American tallied back-to-back points to take a 22-20 lead. Back came the Mids on a kill by Dorothy Murray (Sr., Harbor City, Calif.) and an American attack error to tie the score at 22-22. The Eagles recorded back-to-back blocks to reach match point, and converted on their first chance to win the match on a Kazala kill.

American held statistical leads over Navy in kills (49-38), hitting percentage (.382-.193.), digs (47-36), blocks (8-4) and aces (5-1).“Exactly the same reasons our team was so successful yesterday against a very good team (a 3-0 win over Army) didn’t work for us today against a crazy impressive American squad,” said Bock. “We served okay, but we would have needed to ramp it up another notch to keep their firepower at bay. Passing was okay, but our setters weren’t able to run multiple options as we would have liked to. I do believe the passing was the result of American serving just BB’s at us. They served great.”

Kazala tallied 18 kills on 37 swings, hit .432 and added four blocks to be tabbed as the Most Valuable Player of the event.

This year’s Navy team handed American its lone league loss of the season, which was the first win by the Mids over the Eagles since 1989, tied a school Division I record with 23 wins, posted a league regular season record of 12-4 to notch the highest league placement –– solo second –– for the program since sharing the regular season title in 1999, was swept only twice this season (Sept. 1 vs. Ball State and today), set school records with an eight-match winning streak and a seven-match league winning streak, and posted an 11-1 record in home matches.

“At the start of the season in our first team meeting, (Navy Athletic Director) Chet Gladchuk was awesome,” said Bock. “He looked the players in the eye and said it was ‘time for you to start playing for championships.’ That sent an immediate signal. Number one, there was capability in the room, and number two, there had to be some big goals. All year, it has been in everybody’s target to get a championship. It didn’t happen this year, but that goal will continue to be there.”

“Coach (Bock) said in the locker room that this year was all about breaking boundaries and doing new things,” said Dotzauer, “and I think that is what this team as a whole has done. It has been amazing year, and for my four years this has been the most rewarding and the best year to see the work we have done for the players before us, and I know the returning players and those coming after us, I am confident they will build upon this and keep getting better. I am tremendously proud of who they are as individuals. They are absolutely amazing young women.

“Confidence, in what we were able to do (a takeaway from this year). Overcoming losing a bunch of fifth sets, overcoming the hard stuff that we faced, but also knowing that the hard work pays off. You put in a lot of hard work in the preseason, you grind every day in practice, but the hard work gets results. That shows in this year with ending the year in second place in the regular season and going toe-to-toe with the first-place team, and knowing Navy has the capability to be the number one team in the Patriot League.”

“This senior class was the first myself and (former assistant) Kait Kozak recruited the whole way through from the time they were sophomores in high school on,” said Bock. “They were given a charge. I think we wrote them notes when they were plebes that said they were the ones we were counting on to take this program to a whole new level, and asking them to assume the leadership to get us to the kind of place we are in right now. They have done exactly that. Just an amazing group of young ladies, clearly good athletes, but more than that they are the kind of people we want to be leaders for our country.”

Returning to next year’s team will be five of the seven starters.