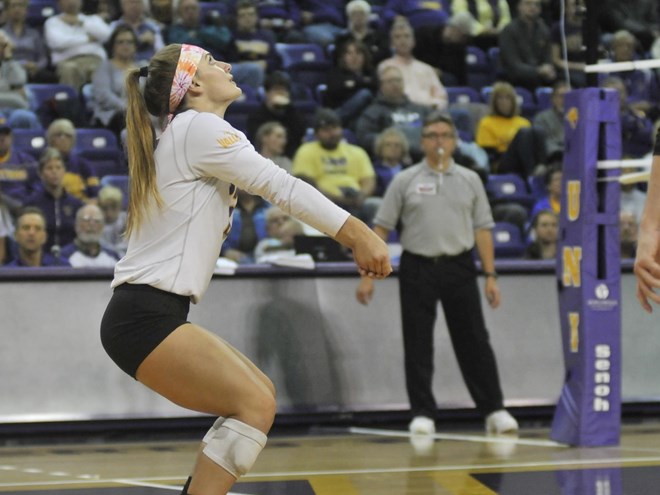 Northern Iowa remained perfect in Missouri Valley play with a four-set win over Bradley on Saturday as senior libero Kendyl Sorge reached the 2,000-dig milestone. Sorge is just the third UNI player to reach the plateau and the eighth active Division I player to do so.  Current Photo via Northern Iowa Athletics

That's a lot of #UNIFight pic.twitter.com/2KrObZb4dY

Sorge pulled up 20 digs in the match to move to 2,003 and into second place all-time in the Panther record books behind Ellie Blankenship (2,656).

The senior from Janesville, Iowa, boosted her season total to 272 digs with Saturday’s haul, including 16 double-digit efforts. She has notched 20 or more saves in four matches, including each of the last two (20 vs. Illinois State on Friday, 20 vs. Bradley on Saturday).

All told, Sorge has tallied double-digit digs in 105 matches, including 36 20-dig efforts and four 30-plus save performances.

As a junior, Sorge contributed 625 digs, fourth most on the school’s season records list, to UNI’s NCAA record haul of 2,581 digs. She notched double-digit tallies in 34 matches, including 13 20-plus save efforts and a season-best 30 at Illinois State.

As a sophomore, the libero managed 621 digs (7th most in a season) with 32 double-digit efforts. Sorge pulled up 20 or more digs on 13 occasions, including a career-high 35 vs. Iowa State (9/13/16), a tally which ranks tied for fourth on the school’s match record list.

As a rookie, Sorge registered 485 digs with 23 double-digit save nights, including six efforts of 20 or more and two 30-plus dig performances.