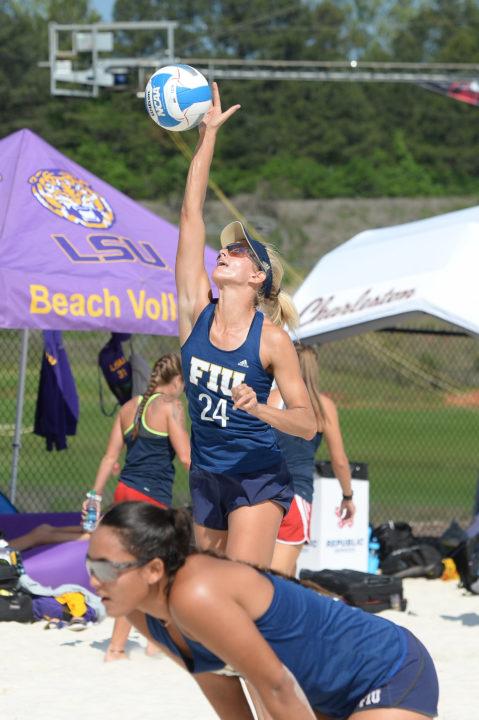 The CCSA Tournament brought perhaps the biggest upset of the month, with Florida International remaining red-hot and knocking off LSU. LSU is still pretty solidly the #2 team in the East, but FIU could make a late tournament bid in the #3 spot, perhaps passing a falling Stetson program.

We’ve updated our projections each week since our original predictions. You can find them here:

USC finishes the season a perfect 30-0 after tearing through a 5-0 last weekend run. That included wins over tournament teams UCLA and Long Beach State.

It’s still a toss-up between Pepperdine and UCLA. Both have almost identical records. Pepperdine has two quality losses (USC and Florida State), but a bad loss to Hawaii. UCLA has two losses to USC and doesn’t have any blemish as bad as Pepperdine’s Hawaii miscue, but UCLA’s third loss came to Pepperdine way back on March 4th. The latest AVCA poll put UCLA at #2, which could suggest that loss from almost two months ago is starting to factor in less than each team’s more recent results. Pepperdine won the WCC with easy wins over Pacific and Loyola Marymount, while UCLA beat Cal Poly and lost to USC over the weekend.

Long Beach State beat Bakersfield, but had their own loss to USC. They’ve still got the Big West Championships to go. Hawaii didn’t play this past weekend but will also play at the Big West tourney.

Both Arizona and Grand Canyon went 2-0, but didn’t beat anyone of note.

Florida State finished 19-0 in the East and will easily be the top-ranked team from the region. They won the CCSA Tournament, which featured almost all of the main regional contenders.

LSU should still be in good shape for the #2 spot with just three East losses. But a CCSA Tournament loss to Florida International was the most impactful upset of the weekend and proves the Tigers aren’t as far ahead of the rest of the East field as FSU is.

Florida International rockets up three spots and into our tournament projects, replacing a Stetson team that fell hard over the last few weeks of the season. FIU beat LSU to go to the conference championship match a week after beating Stetson at the FSU tournament.

Stetson is a tough call. They have an 18-5 record in the East that is still better than any other team in the region outside of FSU and LSU. But they don’t have a lot of quality wins in a pretty soft schedule. Their season wrapped with an ASUN title that included two drubbings of FGCU and a win over UNF. If Stetson drops out of the top 3, the tournament faces a bit of a logjam. FIU has beaten Georgia State and Stetson, but lost twice to South Carolina. South Carolina beat FIU but lost twice this year to Georgia State. Georgia State split with Stetson but lost to FIU.

We’ll go with FIU out of that mess, if only because they’ve got the most impressive win of the bunch, beating LSU.

There shouldn’t be much change in the at-large bids, as the cluster of bubble teams in the East (FIU, Stetson, South Carolina and Georgia State) haven’t really done enough to leapfrog either of the West teams leading the ranks. Long Beach State and Hawaii could jockey for seeding, though, during the Big West Tournament.

With the tournament bracket coming out on Sunday, there are really only two major conference tournaments left that could affect invites or seeding: