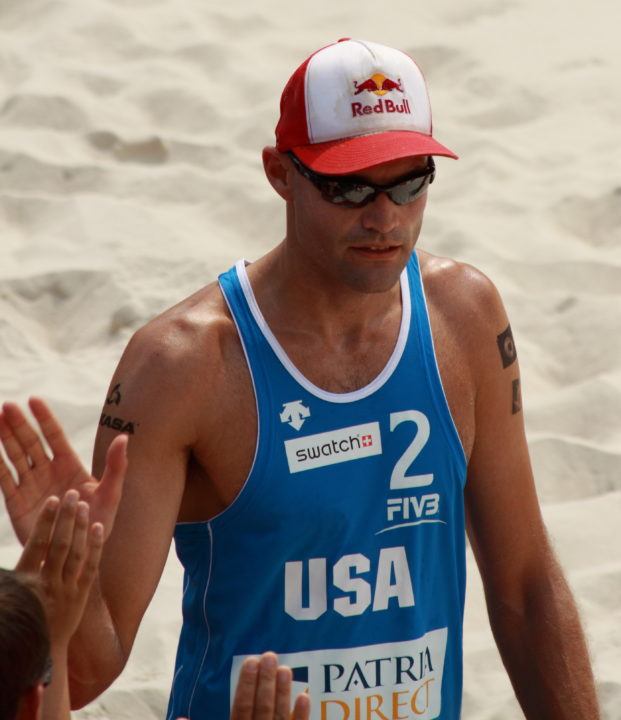 American beach legend Phil Dalhausser has been named the USA Volleyball Male Beach Player of the Year for a 6th time... Archive Photo via Petr Kadlec

“It’s an honor to be voted the Male Beach Player of the Year,” Dalhausser said. “I’m getting older and every award means a little more. It means that you’re still playing.”

At 36-years old, Dalhausser won 2 of the 4 AVP tournaments he won with partner Nick Lucena. The pair also won 4 out of 13 FIVB tour stops they played in and ranked 4th overall on the year. The duo, who have played together regularly since mid-2015, amassed $143,000 in season earnings in 2016. Lucena won the Player of the Year award last year, and Dalhausser won it the year before that.

“I didn’t give Nick and me a good chance to qualify for the Olympics, I don’t think many people did, not only did we qualify but we ended up being the third seed in the tournament,” said Dalhausser. “We had a pretty darn good 2016, it was one of the more fun years of my career. Nick and I have been buddies for 15-plus years now, and our coach Paul (Baxter) who we’ve known for over 10 years, we traveled together and it was like the three amigos traveling all over the world playing volleyball. We complement each other well on the court and we were playing pretty good ball in the past year and a half.”

Dalhausser got a late start in the sport of volleyball, but made up ground quick. He didn’t begin playing until his senior year of high school, and then in college was just a club player at the University of Cetnral Florida. After college, he worked for a concrete company and then for a company that paints stripes on Florida highways. Since he’s turned to the sport full-time, though, he’s won the 2007 World Championship, the 2008 Olympic gold medal with then-partner Todd Rogers, and has an overall total of 88 career professional tournament victories. That includes 34 tournaments on the global FIVB World Tour – which ranks as the 3rd-most of all-time.

Phil is a “unique player in the history of beach volleyball,” USA Volleyball CEO Doug Beal said. “His talents have been so well documented and recognized, when you are engaged in the beach world and you talk to the top players in the world, they speak with a combination of admiration, awe, respect about Phil. Every time he is on the court, regardless who his partner is, there is the belief on the other side that this is the team you have to beat if you’re going to win the tournament. His history in the sport and the longevity that he’s played at the top of the world with multiple partners makes him one of the greats of all time.”