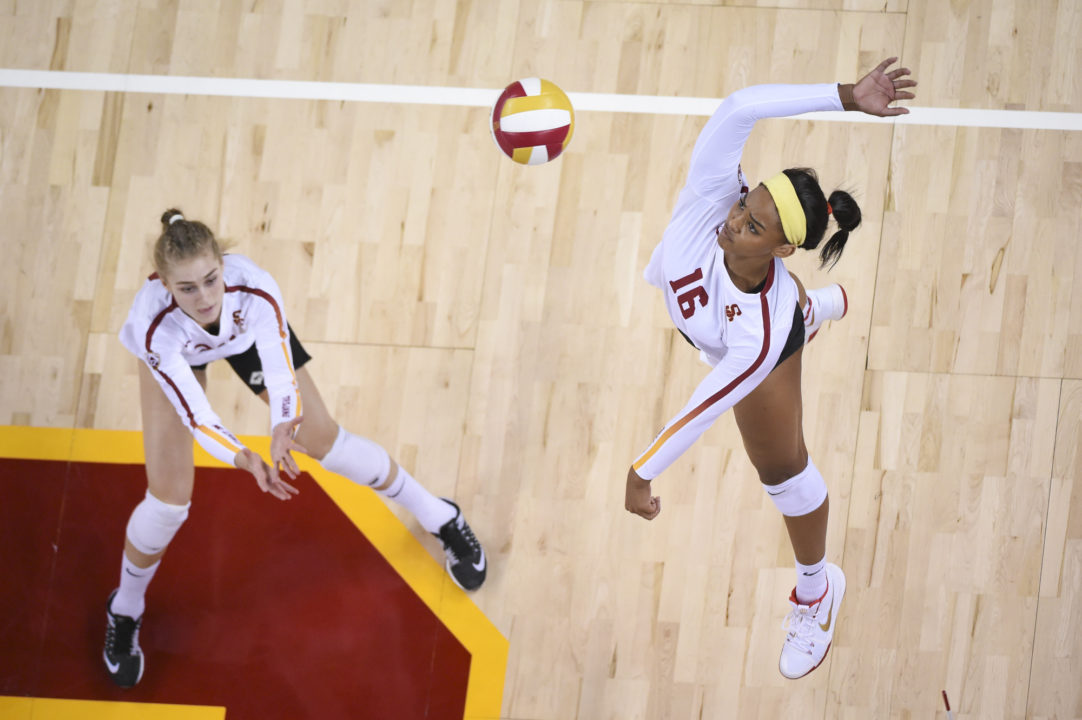 No. 7 USC takes its perfect 3-0 record on the road to face off with No. 3 Florida, UCF and Louisville at the Bubly Invitational in Gainesville, Florida.  Current Photo via USC Athletics

USC IN BRIEF: First-year head coach Brent Crouch opened his tenure at USC with a bang as he led the Women of Troy to victories over No. 5 Kentucky, Northern Iowa, and No. 13 Creighton to start the season. The Trojans return to the site of their final match of 2017 this week. USC advanced to the NCAA regional final last December and had match point against the Gators but lost a heartbreaking five-set decision to the host team. It was the program’s sixth appearance in the NCAA regional championship round in the last eight years. The Trojans boast a formidable offense with All-American OH Khalia Lanier leading the charge (4.00 kps). She is joined on the pins by sophomore standout Brooke Botkin (4.33 kps) and junior transfer Emily Baptista (3.08 kps). In her first collegiate matches, freshman setter Raquel Lázaro put up 140 assists and posted a double-double with 53 assists and 22 digs against the Bluejays. On defense, the Women of Troy are led by senior libero Victoria Garrick (4.50 dps) who is one of 17 all-time Trojans to collect more than 1,000 career digs.

LAST TIME OUT: USC hosted and won the Trojan Invitational and earned a big upset victory over No. 5-ranked Kentucky (3-1) to start the season. The Women of Troy swept Northern Iowa and then battled it out with No. 13 Creighton for a five-set victory. Senior OH Khalia Lanier was named the tournament’s MVP and was joined on the all-tournament team by sophomore OH Brooke Botkin and freshman setter Raquel Lázaro. First-year head coach Brent Crouch became the fifth USC head coach (out of six) to win his first match with the program as the Trojans improved to 36-7 in all-time season openers, which includes a 9-3 record in season openers at the Galen Center.

AVCA POLL POSITION: The Trojans opened 2018 ranked No. 10 after finishing the 2017 campaign in the No. 7 spot. Overall, the Trojans have appeared in the poll 498 times and have held a spot among the poll’s top 10 teams 315 times, which ranks seventh all-time. The Trojans have also held the No. 1 ranking 47 times previously, which is sixth all-time.

PAC-12 POW(ER)S: USC players have received Pac-12 Player of the Week honors 75 times (third most among league teams). Since 2011, when the Pac-12 began honoring separate offensive and defensive players of the week and named a freshman of the week, Trojans have earned 19 offensive awards, 10 defensive awards, and taken home 15 freshman honors. In the first week of the 2018 season, sophomore OH Brooke Botkin received her first-career league honor as the Offensive Player of the Week and freshman setter Raquel Lázaro was chosen for Freshman of the Week honors.

ROAD TEST: The Women of Troy own a 33-9 all-time record in road openers, which includes neutral-site matches. USC has won its last eight consecutive road openers dating back to 2010. This is the first time the Trojans will play their first road match of the season in the state of Florida.

SUNSCREEN: USC is 6-3 all-time in the Sunshine State and last played there to end the 2017 season. The Trojans upended No. 8-ranked Minnesota in last year’s NCAA regional semifinal and took host Florida to the wire before falling in a five-set thriller to the eventual NCAA runner-up Gators.

TROJAN-KNIGHT: Central Florida head coach Todd Dagenais served as an assistant coach at USC for three seasons from 2005 to 2007. Before trading his Trojan armor to become a Knight, he helped guide the Women of Troy to the 2006 NCAA regional semifinals and the 2007 NCAA national semifinal.