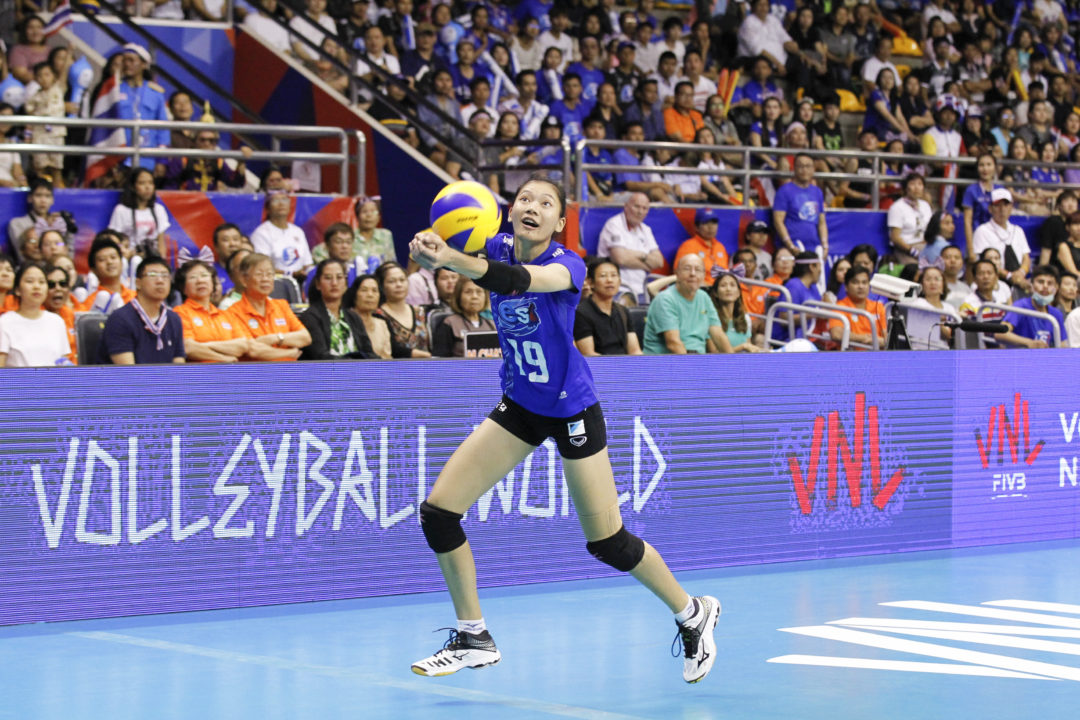 Chatchu-on Moksri is expected to miss the rest of the Asian Games tournament in 2018. Archive Photo via FIVB

Thai outside hitter Chatchu On-Moksri sprained her ankle in the team’s 3-0 sweep of Vietnam in the quarterfinals at the 2018 Asian Games, and is expected to miss the rest of the tournament. She landed awkwardly after a big kill and collapsed to the floor in the 2nd set of Wednesday’s win. She had to be carried off the court by her teammates and was transported to the hospital for further evaluation.

The 18-year old is one of the country’s top young prospects, and plays professionally for the PFU BlueCats in the Japanese V.Premiere League.

Without her services, Thailand will play defending champions South Korea on Friday in the tournament semi-finals. This is the second-straight edition of this tournament that has seen the Thai team in the semi-finals: in 2014, they lost in the semi-finals 3-1 but beat China 3-0 in the bronze medal match for the country’s first Asian Games medal in indoor volleyball in 48 years.

“Now we have reached the target,” said Thailand head coach Danai Sriwatcharamethakul. “Anything from here is a bonus. Some players hope for more as this will be their last Asian Games.

“Losing Chatchu On will definitely affect the team but we will still have some replacements. What we need to be careful is to prevent players from having injuries. We hope she can recover to help the team.”

Moksri is expected to return in time for the World Championships that begin on September 29th in Japan, barring any complications in her recovery. She led Thailand with 23 points in their 3-1 win over Indonesia to close pool play and is the team’s top scorer in the tournament.

The Thai team did get some good news, in spite of the loss of Moksri. Ajcharaporn Kongyot, who has been dealing with a knee injury, hasn’t played at the Asian Games, but did participate in a training session on Thursday. Kongyot is typically the team’s 2nd-leading scorer behind Moksri.

Watch a video of the injury below: