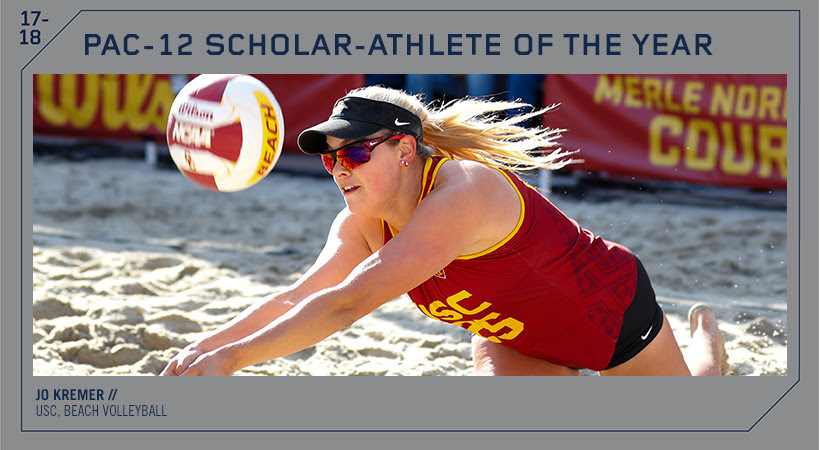 SAN FRANCISCO – USC’s Jo Kremer was named the Pac-12 Beach Volleyball Scholar-Athlete of the Year, the Conference office announced on Monday. The award, which is presented in each of the 24 sports the Conference sponsors, was established to honor collegiate student-athletes that are standouts both academically and in their sports discipline.

A senior from Pacific Palisades Calif., Kremer is a communication major with a grade point average of 3.72 and has consistently boasted one of the highest GPAs on the squad during her career. Kremer is a three-year starter, helping to lead USC to three Pac-12 titles, as well as three NCAA titles. Individually, she has one over 100 matches in her career, this year going 23-8, helping USC to a top-five national ranking. A two-time Pac-12 All-Academic team honoree, she is the second-straight Trojan to win the academic honor after former teammate Nicolette Martin earned the honor last season. The Trojans look to defend their Pac-12 crown this week at the Pac-12 Beach Volleyball Championships, April 26-28 at Stanford.

In order to be eligible for the Pac-12 Scholar-Athlete of the Year award, student-athletes must be seniors (in athletics eligibility) on track to receive a degree, have a cumulative grade point average of 3.0 or higher, participate in at least 50% of the scheduled contests in the sport, and have a minimum of one year in residence at the institution. Each Pac-12 institution may nominate one individual per sport, and the winners are selected by a committee of Pac-12 staff members at the conclusion of each sport’s regular season. The athletic accomplishments of the nominees are a consideration in the voting for the award.

Martin and the rest of the Trojans are preparing to defend their Conference crown this week at the Pac-12 Beach Volleyball Championships which begins Thursday, April 27 on the campus of the University of Arizona. Admission is free for the event.