Utah Heads To SoCal For Clash With USC, UCLA 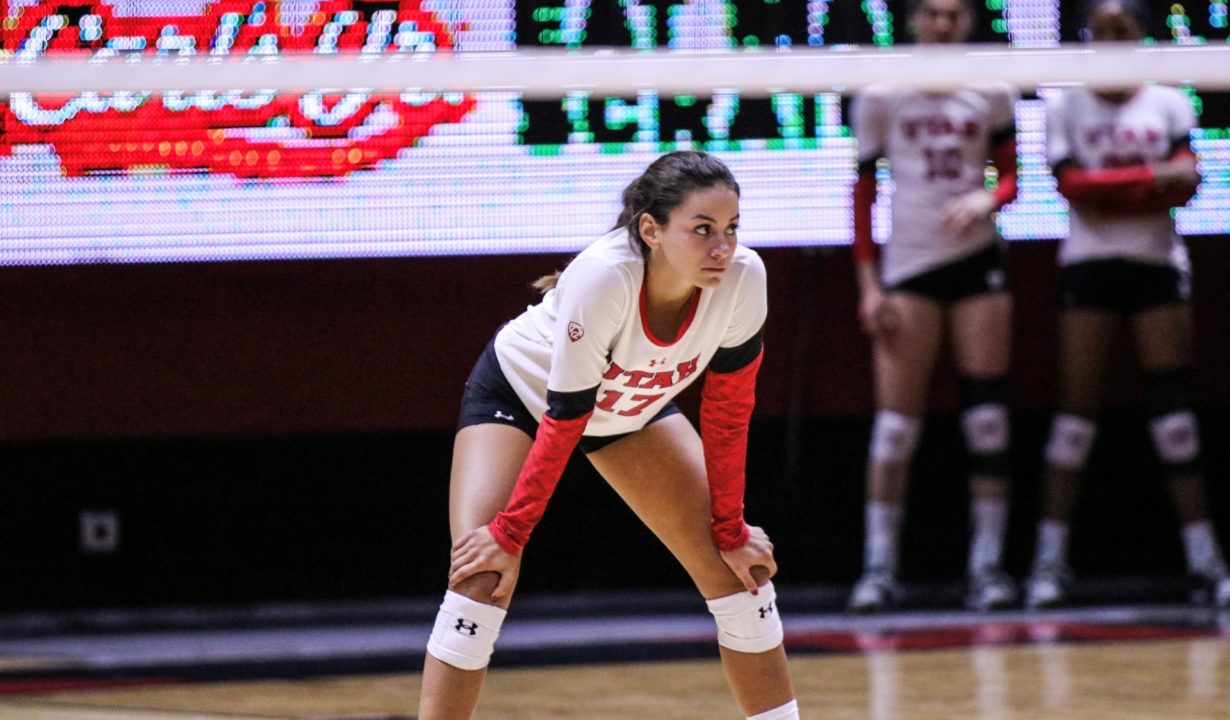 Utah will make its second to last road trip this weekend, with a pair of matches against both Los Angeles-based squads, facing off against USC on Thursday, Nov. 9 and then taking on UCLA on Friday, Nov. 10. Utah is 8-4 overall in road matches this season. Current Photo via Utah Athletics

FIVE THINGS TO KNOW
• Utah will make its second to last road trip this weekend, with a pair of matches against both Los Angeles-based squads, facing off against USC on Thursday, Nov. 9 and then taking on UCLA on Friday, Nov. 10. Utah is 8-4 overall in road matches this season.

USC continued Pac-12 play against Arizona and Arizona State this past weekend. The Trojans picked up a pair of wins to move to a three-game winning streak. USC downed Arizona State in four sets and then closed out the weekend with a five-set win over Arizona.

USC’s offensive attack is led by Khalia Lanier and Brittany Abercrombie. Lanier registers 4.08 kills per set, while Abercrombie has a 3.15 kills-per-set average on the season. Reni Meyer-Whalley totals 6.16 assists per set and Cindy Marina records 5.40 a/s to run the offense. Defensively, Victoria Garrick notches 3.93 digs per set for the Trojans.

In the first meeting between the Utes and Trojans, USC came out with the five-set win at the Huntsman Center back on Oct. 22, which snapped Utah’s six-game win streak.

Reily Buechler leads the balanced UCLA offense with 3.28 kills per set and 282 kills on the season. Including Buechler, UCLA has four athletes who have 200 kills or more on the season. Running the offense for the Bruins, Sarah Sponcil tallies 10.86 assists per set. Defensively, Zana Muno registers 4.86 digs per set, while Madeleine Gates records 1.22 blocks per set.

Utah won the first meeting between the two teams back on Oct. 20. The Utes picked up the four-set win over the Bruins, giving Utah its sixth-straight conference win which was the longest streak since joining the league.

With a five-set loss to the Trojans earlier this season, USC now leads the all-time series 17-3, which includes an all-time record of 5-2 when facing the Utes in Los Angeles. Utah won last season’s match between the two teams at the Galen Center, with Utah taking the contest in four sets.

UCLA continues to lead the all-time series 17-4, despite the Utes taking the match in four sets in Salt Lake City earlier this season. Utah’s win snapped a four-match losing streak to the Bruins and it marked the first win over the Bruins at home since 2014. Utah is just 6-1 all-time when facing the Bruins in Los Angeles, with the only victory coming back in the 2013 season.

Utah’s contest at USC on Thursday will be televised live on the Pac-12 Networks. Kevin Barnett will have the call, with Camryn Irwin providing color commentary. Fans can also follow the action on-line by logging onto Pac-12.com/live or watching via smart phones and tablets using the Pac-12 Now App, which can be downloaded at the Apple Store, Google Play Store or Amazon Apps Store.

Friday’s match against the Bruins will be live-streamed with a link to the contest at www.UCLABruins.com.

Senior Adora Anae led the way in both contests, collecting 15 kills against the Cougars and then totaling 24 kills against the Huskies, respectively. Fellow senior Carly Trueman added 20 kills in the loss to UW, which tied a career-high for the third time overall. Anae tallied a season-high 20 digs in Utah’s losing effort to UW.

Utah seniors Adora Anae and Carly Trueman both notched 20-kill efforts against Washington this past weekend. Anae led the way with 24 kills on the night, while Trueman chipped in with 20 kills. This marked the first time that a pair of Utah players have totaled at least 20 kills each in a single match since Nov. 19, 2011, when Morgan Odale tallied 23 kills and Chelsey Schofield-Olsen chipped in with 22 kills against Washington State.

Anae and former All-American Shelly Sommerfeldt are the only two players in Utah history to record at least 20 kills and 20 digs in a single match. Anae is the only Ute to do so multiple times in her career.

Sophomore Brianna Doehrmann is coming off a 15-dig performance against Washington this past weekend. With the total, Doehrmann has now tallied 276 digs on the year, which surpasses her previous single-season-high mark of 268 digs that she recorded as a freshman last season.

Senior outside hitter Carly Trueman is nearing the 1,000-kill mark. Trueman now has 992 career kills to her name and is just eight kills away from becoming a member of the 1,000 career-kill club. She would be the 18th player in school history to eclipse the 1,000-kill mark.

ANOTHER MILESTONE FOR ANAE ON THE HORIZON

Senior Adora Anae heads into week with 383 kills on the season, just 17 kills from collecting 400 kills on the year. Anae, who already ranks as the school’s all-time leader in career kills, would become the first and only Utah player to register at least 400 kills in three consecutive seasons.

Utah returns to the Jon M. Huntsman Center next week to host its final two home matches of the regular season. Utah will take on Arizona State next Friday, Nov. 17 and will then close out the week facing Arizona on Saturday, Nov. 18.

The team and coaches will recognize Utah’s three seniors, Adora Anae, Carly Trueman and Tawnee Luafalemana, prior to its match against the Wildcats.