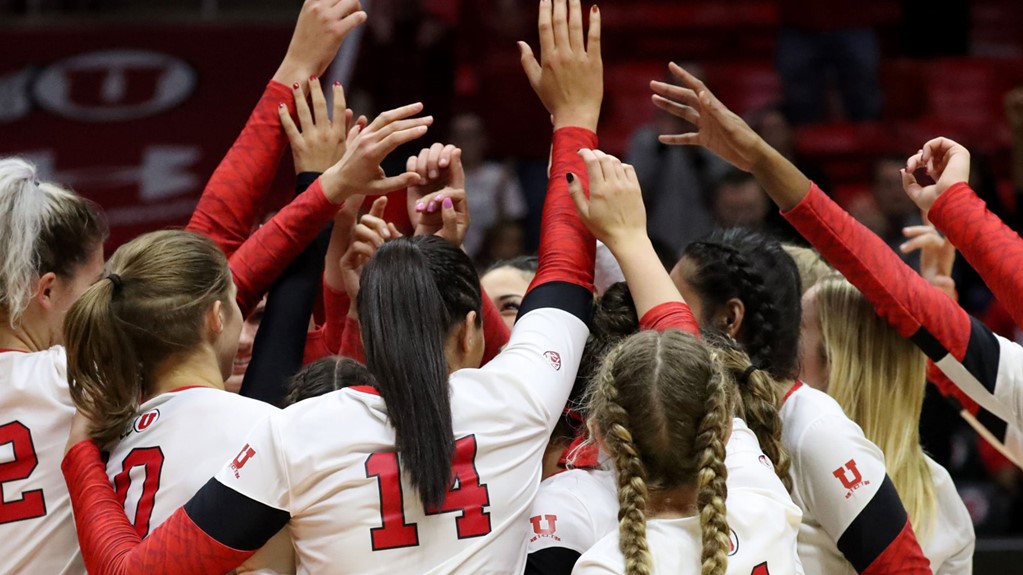 FIVE THINGS TO KNOW
• Utah play its final two home matches of the 2017 regular season this week, hosting Arizona State (Friday, Nov. 17) and Arizona (Saturday, Nov. 18).
• The Utah volleyball coaching staff will recognize its three seniors on the team prior to Saturday’s match with Arizona. Those seniors to be recognized will be Adora Anae, Carly Trueman and Tawnee Luafalemana.
• After registering six kills in Utah’s win over UCLA this past weekend, Trueman became just the 18th player in school history to eclipse 1,000 kills in her career.
• Sophomore Bailey Choy is closing in on career-assist No. 2,000. She would become just the eighth player in school history to eclipse the 2,000 assists mark.
• Utah moved down a few spots to No. 17 in this week’s AVCA Top-25 Coaches Poll. The Utes did, however, move up to No. 14 in this week’s NCAA RPI rankings.

Oluoma Okaro paces the offense at a 4.39 kills-per-set average, which ranks third in the Pac-12. Halle Harker leads Arizona State as well as the conference in digs per set, registering 5.39 digs per set. Nicole Peterson totals 10.15 assists per set, while Griere Hughes also pitches in 3.07 kills per set for the Sun Devils.

Utah took the first meeting between the Utes and Sun Devils in four sets back on Oct. 15 in Tempe, Ariz.

Arizona Wildcats
Arizona split its pair of matches last weekend against the Oregon-based schools. The Wildcats faced Oregon State to open the weekend and was swept. Arizona bounced back and picked up a five-set win over then-ranked No. 16 Oregon after rallying from starting the match down 2-0.

The Utes picked up a win over the Wildcats in the first match-up of the season in four sets back on Oct. 13 in Tucson, Ariz.

Utah snapped a six-match losing streak to Arizona earlier this season, downing the Wildcats in four-set back on Oct. 13. It marked the first win over the Wildcats in Tucson and the first win against Arizona away from Salt Lake City since 1982, back with the two teams met in Fullerton, Calif. Despite the win, Arizona continues to lead the all-time series, 27-6, which includes a 10-2 mark in Pac-12 play. Utah is 3-11 all-time when facing the Wildcats in Salt Lake City, with the last win coming back in 2013.

COVERING THE UTES
Utah’s contest against Arizona State on Friday will be televised live on the Pac-12 Networks. Thad Anderson will have the call. Fans can also follow the action on-line by logging onto Pac-12.com/live or watching via smart phones and tablets using the Pac-12 Now App, which can be downloaded at the Apple Store, Google Play Store or Amazon Apps Store.

Saturday’s match against the Wildcats will be live-streamed with a link to the contest at www.UtahUtes.com or www.Pac-12.com/live/university-utah

Utah limited USC to hitting just .203 last Thursday evening and the Trojans committed 15 service errors in the contest, but the Utes were held to hitting at a clip of just .154 overall, which included hitting below .100 in both the second and fourth sets. Senior Adora Anae led the way with 15 kills and 18 digs, but USC’s Khalia Lanier totaled 17 kills and a .304 hitting percentage to lead the Trojans past the Utes.

Anae registered a season-high 29 kills and collected 19 digs to lead the Utes past UCLA this past Friday. Utah was again limited to hitting under .200, but managed to record eight service aces and 14.0 total team blocks, while UCLA hit under .200 and had 13 service errors on the evening. Senior Carly Trueman chipped in with six kills, netting her 1,000th kill of her career in the match.

SENIOR DAY SATURDAY
The Utah volleyball staff will recognize its three seniors on the team prior to its match against Arizona on Saturday. Utah will pay tribute to four-year letterwinners Adora Anae and Carly Trueman, along with two-year letterwinner Tawnee Luafalemana.

UP NEXT
The Utes will hit the road one last time for the regular season, closing out the 2017 campaign with matches at Stanford (Wednesday, Nov. 22) and Colorado (Friday, Nov. 24) next week.