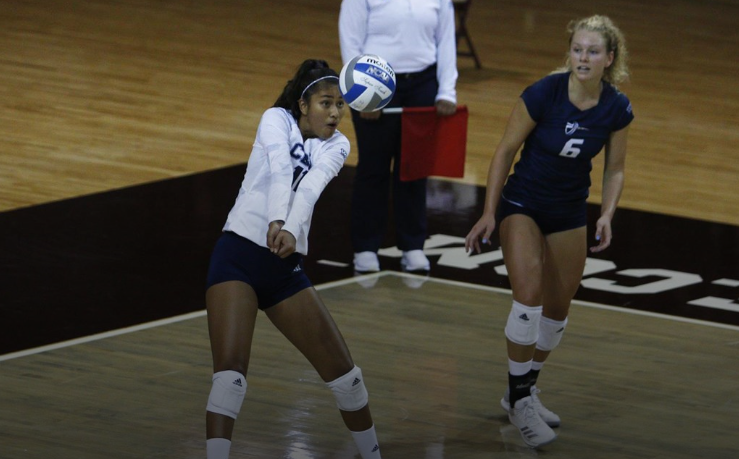 DENVER – Utah Valley freshman outside hitter Kazna Tarawhiti and California Baptist junior outside hitter Nicole Abreau have been named the Western Athletic Conference Offensive and Defensive Volleyball Players of the Week, respectively, for the week of Aug. 27-Sep. 2.

Tarawhiti, a native of Lehi, Utah, helped the Wolverines go 3-1 on the week while averaging 4.79 kills per set and recording double-digit kills in each of UVU’s four matches on the week. Named tot he Oregon Classic All-Tournament Team, her best match came on Saturday against Long Beach State, throwing down 22 kills with just five errors for a .370 hitting percentage and 5.9 points per set. She also added three service aces to go with 16 kills in a sweep over Arkansas-Pine Bluff and 19 kills with 10 digs in a home win over Idaho State.

Abreau, a Lima, Peru native, anchored the Lancer defense as CBU improved to 6-1 on the season after going 2-1 at the Fresno State Invitational. She showed her consistency with a career-high 20 digs against American, 17 against St. Mary’s and 16 against San Francisco to average 4.08 per set. She also added 1.00 assists per set for the Lancers. She ranks fifth in the WAC in digs per set at 4.25 through 25 frames.

🏐| Two weeks into its @WACsports membership, @CBUvolleyball
has produced its first WAC Athlete of the Week, as Nicole Abreu was named the conference Defender of the Week this morning.https://t.co/V1m5ZDpE7r#LanceUp https://t.co/0XdmVP9DLq

Other defensive nominees included: CSU Bakersfield’s Krista Hernandez led the WAC with 6.18 digs per set, including a career-high 33 against UC Irvine … Chicago State’s Summer Farris helped the Cougars earn a split last week, averaging 1.33 blocks per set for CSU … Grand Canyon’s Anabelle Kubinski was named to the GCU Invitational All-Tournament team after averaging 0.82 blocks per set to help the Lopes go 2-1 at home … Kansas City’s Tyrecia Lukes led the conference in blocks, averaging 1.54 on the week as the Roos went 2-1 in Omaha … NM State’s Tatyana Battle received all-tournament honors after averging 3.91 digs per set to go with 3.45 kills per set at the Lobo Classic … UT Rio Grande Valley’s Alexandra Ecker averaged 0.79 blocks per set as the Vaqeuros went 2-2 on the week … Utah Valley’s Jasmine Niutupuivaha had 14 total blocks, including a pair of solo blocks, as the Wolverines went 3-1 on the week.