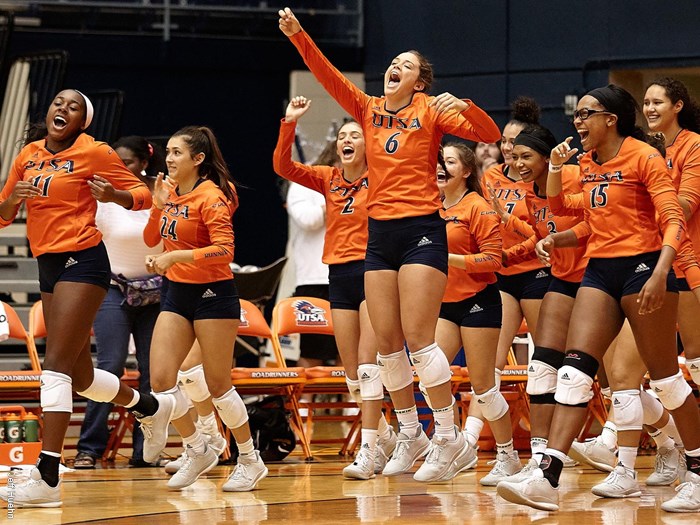 After a 2-0 start to league play, UTSA volleyball will travel to face Rice on Friday at 6 p.m. CT at the Tudor Fieldhouse and UTEP on Sunday at 1 p.m. at Memorial Gym. Current Photo via UTSA Athletics

SAN ANTONIO — After a 2-0 start to league play, UTSA volleyball will travel to face Rice on Friday at 6 p.m. CT at the Tudor Fieldhouse and UTEP on Sunday at 1 p.m. at Memorial Gym.

UTSA (10-4, 2-0 Conference USA) sits in a three-way tie for first in the standings as the conference slate began last week. UTSA earned wins over Southern Miss and North Texas and have won three straight matches – including a four-set result vs. Virginia Tech.

The Roadrunners have totaled 14 kills per set, 13.2 assists per set and 14.8 digs per set as a team in 2018. Juniors Brianna McCulloch and Kara Teal help spur the front line, with McCulloch owning 3.31 kills per set and Teal sporting 2.13 kills and a .316 hitting percentage. Kirby Smith (3.22) and Hannah Lopez (3.34) rank first and second in the league in kills amongst freshmen, with Smith also leading the league’s freshmen with 3.44 digs per set.

Senior Amanda Gonzales has averaged 8.78 assists per set while playing in a 6-2 formation, with freshman Mia Perales adding 4.42 assists per set. Senior Shelby Williams leads the team with 3.94 digs per set and ranks second in C-USA with 21 service aces. Teal has added 0.85 blocks per set at the net.

Rice (10-4, 1-0 C-USA) comes into 2018 after posting a 20-win season in 2017, including a 10-win slate in conference play. The Owls have won four consecutive matches entering Friday, including two straight sweeps and a 3-1 win over Ole Miss. The Owls also own a win over South Carolina, taking Texas Tech, Texas State and Baylor into at least four sets. Rice has totaled 14.2 kills, 13.4 assists and 17.7 digs per set as a team. Nicole Lennon leads the team with 3.79 kills per set, Lee An Cunningham has 4.96 digs per set and Carly Graham and Adria Martinez each have over five assists per set.

UTEP (3-11, 0-2 C-USA) enters the weekend having lost three of its last four matches, falling in four sets vs. Southern Miss and in three at Rice last week. UTEP has wins over UIW, Illinois-Chicago and at San Diego State. The Miners have totaled 11.7 kills, 10.9 assists and 14.1 digs per set as a team. UTEP has been led by Macey Austin’s 3.87 kills per set, with Briana Bustillos sporting 3.42 digs per set and Kristen Fritschie has averaging 9.38 assists per set.

UTSA has won eight consecutive matches vs. UTEP, owning a 24-5 record in sets over the stretch. The Roadrunners are 8-6 in El Paso and last fell vs. UTEP on the road in 1995. Rice owns a 17-7 record vs. UTSA, with the Roadrunners winning three of the last four matches but falling in the final meeting last year in Houston. UTSA is 3-11 in Houston vs. the Owls.