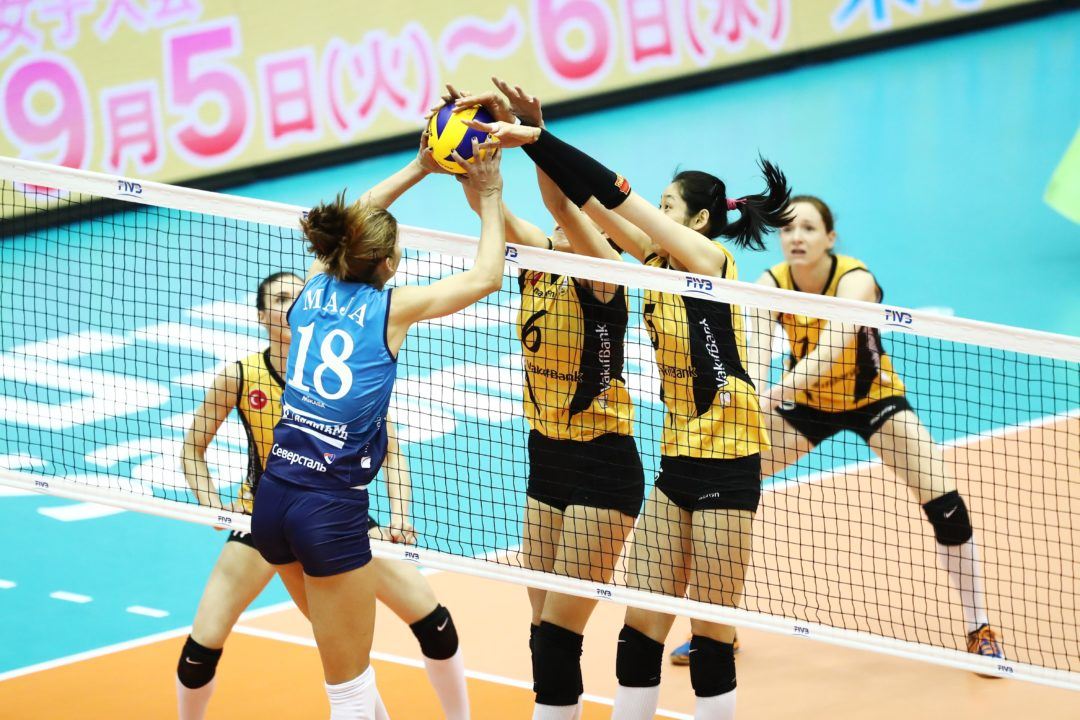 Pool A has completed their first day of play at the 2017 FIVB Women's Club World Championships, with VakifBank Istanbul and Rexona Sesc Rio de Janiero winning their first matches. Current Photo via FIVB

Pool A has completed their first day of play at the 2017 FIVB Women’s Club World Championships, with VakifBank Istanbul and Rexona Sesc Rio de Janiero winning their first matches.

VakifBank was led to their three-set sweep over Club World Championship debutants Dinamo by Lonneke Sloetjes who slammed down 16 kills in the match. Sloetjes was not the top scorer of the match, however, as Dinamo’s Nataliya Goncharova recorded 19 points in the match. Also adding a solid offense for VakifBank was Zhu Ting and Kubra Akman with 14 and 10 points, respectively.

VakifBank is looking to reclaim their 2013 gold and improve on their third place finish in last year’s event, improving their overall competition record to 11-3.

The Turkish club was able to hold off a strong Dinamo net defense in the first with strong offensive skill from Stoetjes, Zhu and Kimberly Hill. The next two sets were more easily controlled by VakifBank as they rolled to 25-19 and 25-18 second and third set victories.

In Rexona’s win over Hisamititsu Springs, Monique Pavao and Drussyla Costa paced the Brazilian squad to the four set victory. Pavao and Costa each put down 19 points for Rexona, while Gabriela Guimaraes and Juciely Barreto each added 13 and 11 points, respectively.

Despite having three players score 14 points (Risa Shinnabe, Nana Iwasaka, and Yuki Ishii) Hisamitsu was not able to square things away in the first day of play.

The first set was a dominant showing from Rexona, as they took the early 1-0 lead with a 25-16 win. Hisamitsu came back in the second to tie things up 1-1 with 25-20 second set win over Rexona. The remainder of the match was all Rexona, as they jumped to another 25-16 third set win and a close 25-21 fourth set win to take the match.

VakifBank will take on Rexona Sesc on the second day, while Dinamo will face Hisamitsu Springs.