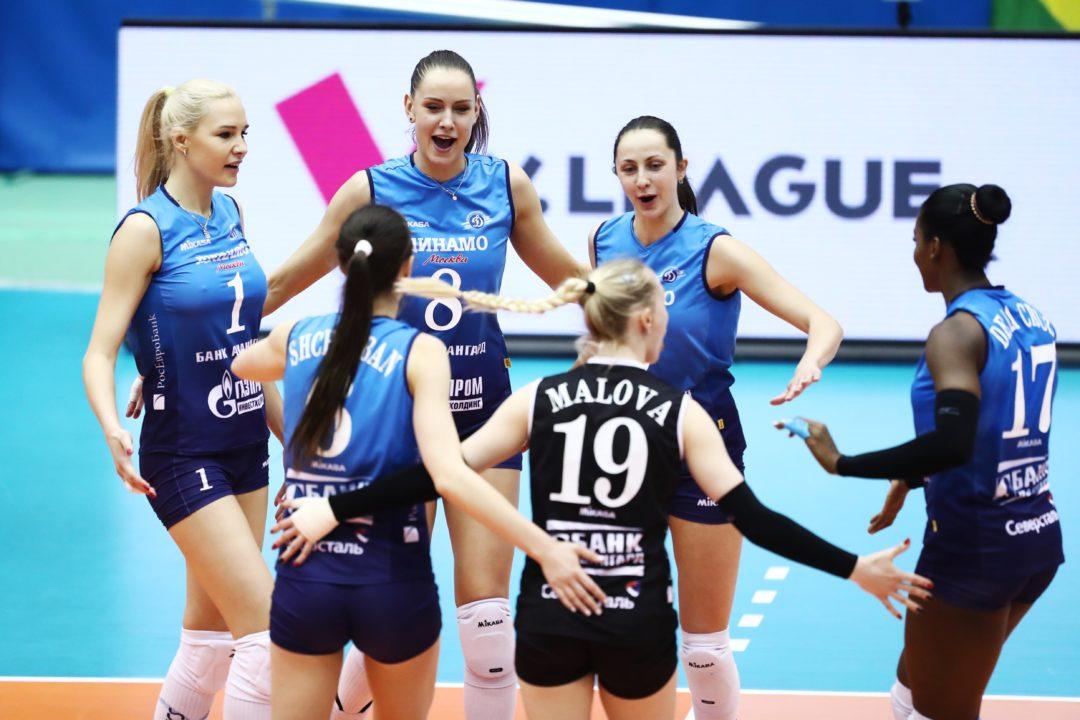 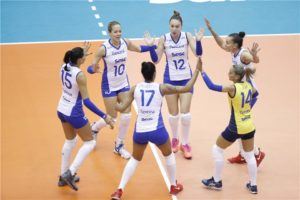 Nataliya Goncharova left everything on the court for her Dynamo Moscow squad, scoring 32 points, including 29 kills, while lifting the team to a 22-25, 25-19, 27-25, 25-18 win over Osasco Saturday night to take fifth at Club Worlds.

The difference in the  match were a handful of kills and eight extra miscues (25 in total) committed by the Brazilian side. Osasco outblocked Dynamo 10-9 and served up six aces to five for the Russians.

“We are happy with the result,” Dynamo captain Vera Vetrova said. “We were able to end the tournament on a positive note. Fifth place is different from our original goal, but we are pleased with this win.”

“Brazilian teams are strong,” De La Cruz said. “They have players that fight until the end. It was nice to finish with a win despite finishing in fifth.”

Osasco took an early 6-3 lead in Set 2, but Dynamo responded to go ahead 10-8. Dynamo worked to a 16-11 lead with a trio of Goncharova putaways. A block by Poljak gave Dynamo a set-point chance at 24-18 and a hitting error gave them the set two serves later. Goncharova accounted for 10 points in the set.

Dynamo held slim advantages in Set 4 at 7-6 and 16-15. Osasco was within three at 21-18, but Dynamo closed out the match with four straight points.

“We played great games here,” Osasco coach Luizomar De Moura said. “We saw strong defense against the Asian teams and played with strong players against the European teams. This was a precious experience for us. We have learned many valuable lessons here.”

“This was a good experience, we will learn a lot from this,” Tandara Caxeita said. “We just could not show enough mental strength in this match.”

NEC Red Rockets pounded down 50 kills and added seven blocks in the sweep of league rival Hisamitsu Springs Sunday morning for their first win of the tournament and a seventh-place finish. NEC won the match 25-16, 25-23, 25-22.

“We just wanted to end the tournament with a win,” captain Haruyo Shimamura said. “We disrupted their plays with our service, which gave us great rhythm. That was a big factor in the game. We saw our shortcomings in this event and hope to improve on them next season.”

“Our service worked effectively today and that was decisive in this victory,” NEC Red Rockets coach Akinori Yamada said. “Playing against foreign teams that have height and power taught us a lot in this one-week event. We must minimize our point loss and serve better to compete against these teams.”

NEC made quick work of their rivals in Set 1, cruising to a 25-16 victory.

In Set 2, NEC led 20-15 late, but Hisamitsu rallied to within three on an Ishii ace. The host team trailed by just two at 24-22 after a Shimamura kill, but couldn’t finish the comeback as a Koga kill ended it at 25-23 for NEC. Koga had six points in the stanza.

Hisamitsu took the early lead in Set 3, boasting a slim 8-7 edge at the first timeout. NEC grabbed the lead at 15-12 forcing a Hisamitsu timeout. The break worked and the team rallied, but not enough to stop NEC from earning the 25-22 win and the match.

“Their serves were very tough to defend,” Ishii said. “But I believe that we had great experience in this event. It is tough to win on the global stage without our other players. We have many issues to address and hope for good results next season.”

“NEC had strong defense in the first half of the match,” Sakai said. “There were different qualities in the rallies that they executed well and that is why we have this result. Our wing attacks did not function well, so we focused our attacks from the middle but that did not make any difference either.”