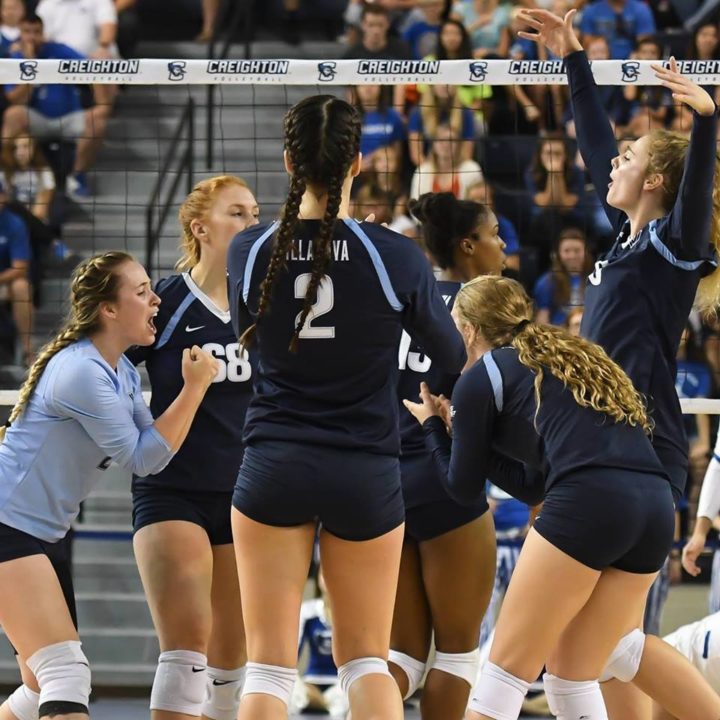 Villanova improves to 6-1 on the season after defeating Utah in five sets. Archive Photo via Villanova Athletics

The Villanova Wildcats pulled off the upset in five sets over the #23 Utah Utes in the Villanova Volleyball Invitational Friday night on their home court. The Wildcats had four players tab double-digit kills for the second time this season.

The Utes took charge in the beginning, taking the first and third sets, but the Wildcats were able to fight back and claim the deciding fifth set. Villanova was able to extend their lead to 13-7 in the fifth, and ended the set at 15-10. Villanova hit .343 in the match while holding their opponents to .313.

The Wildcats were able to win this set by controlling their errors. Villanova tabbed less attacking errors (20-12) and serving errors (12-10) in the match.

Mallory Pottsled Villanovato the win with 14 kills on 36 swings with five errors for a .250 hitting clip, while Sanaa Barnes addedin another 13 kills on a .370 clip. Amanda Pedersen-Henryand Clare Delaplanealso recorded double-digit kills with 12 and 10, respectively. Allie Olsonoskihad a strong offensive performance with seven kills and zero errors for a .412 hitting percentage.

Emma Deckerproduced a double-double with 49 assists and 10 digs while Regan Lough picked up a match-high 21 digs.

Despite close individual sets, it was a sweep for the High Point Panthers over the Temple owls on Friday at the Villanova Volleyball Invitational in Villanova, Pennsylvania. This was High Point’s first sweep of the 2018 season.

Molly Livingston wasthe star of the match for High Point as she put down 12 on 18 swings for a .611 clip. Madison Smithrecordednine kills and two blocks while Mackzenzi Thornburg dishedout 23 assists and two digs. In the backcourt, Abby Bottomley pickedup a match-high 16 digs.