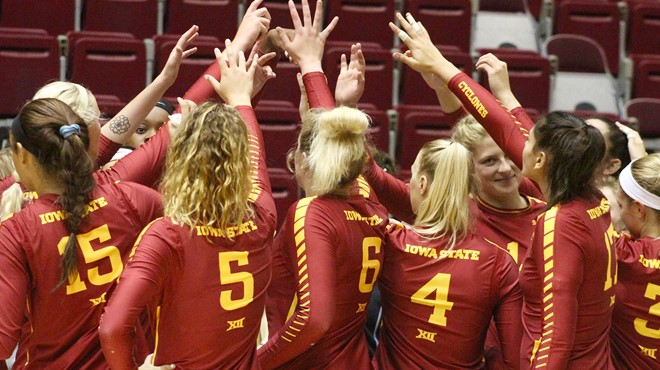 The Cyclones rebounded from Friday's four set loss to No. 14 Creighton with a four-set victory over the Shockers with help from a crushing block and nine or more kills by five players.  Current Photo via Iowa State Athletics

Host Creighton had the day off on Saturday, but still played host to a match with Top 25 implications between No. 24 Iowa State and vote getter Wichita State.

The Cyclones rebounded from Friday’s four set loss to No. 14 Creighton with a four-set victory over the Shockers with help from a crushing block and nine or more kills by five players.

The Shockers wrap up the Bluejay Invitational with a  3 p.m. Sunday match against Creighton, while the Cyclones head to Lincoln for a 2 p.m. ET match against No. 8 Nebraska.

Stat Leaders: Jess Schaben put down a match-high 17 kills for the Cyclones and rounded out a double-double with 10 digs. Josie Herbst (10), Eleanor Holthaus (10), Grace Lazard (9) and Avery Rhodes (9) rounded out a balanced offensive attack. Herbst hit at a team-best .391 clip and put up four blocks, while Lazard hit .389 to go with five stuffs. Hali Hillegas notched 30 digs for her third 30 dig effort of the season (following 31 vs. Oregon State and Gonzaga).

It Was Over When: After struggling in Set 3, Iowa State scored four of the first five points of Set 4, with two kills, a block and an error. Later trailing 13-8, Wichita State mounted a comeback, rallying to within one at 15-14, but could not break through. Three ISU miscues and two kills by Regan Stiawalt aided the rally. A 4-1 run, including a kill and a block by Lazard, gave the Cyclones some cushion at 19-15. The Shockers made a final push with three of the next four points to cut it to 20-18, but it was not enough. Iowa State closed out the win on a 5-2 run, capped by a Holthaus putaway.