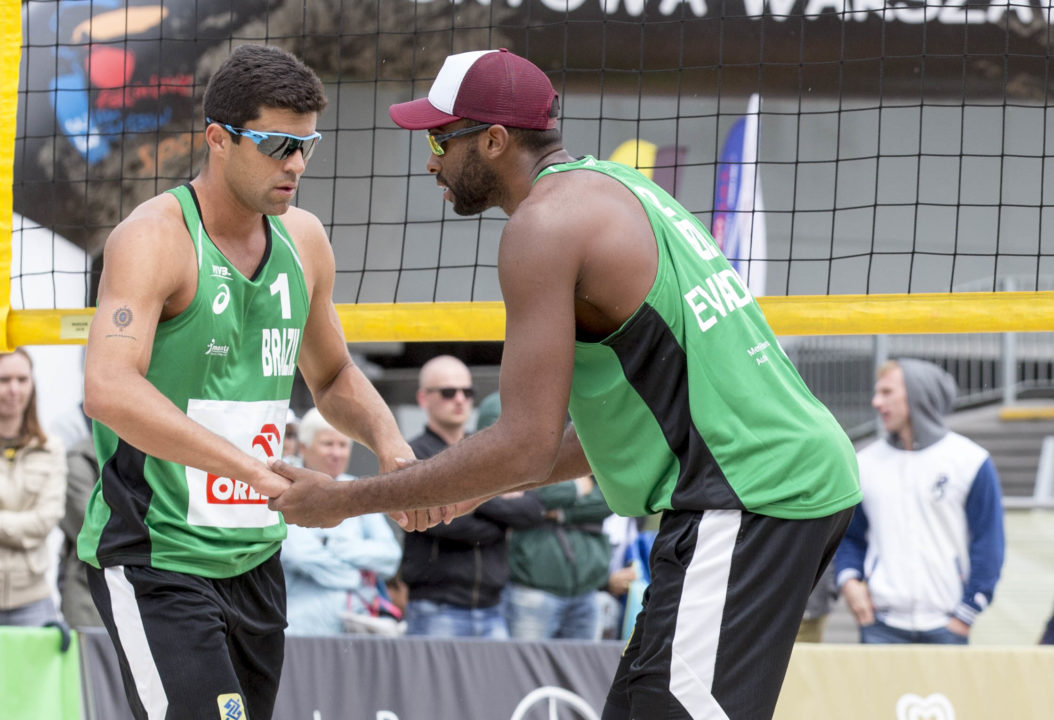 Andre/Evandro have had the upper-hand since Brazil's latest beach partner reshuffle on the men's side. Archive Photo via FIVB

The $300,000 Warsaw four-star stop of the FIVB World Tour whittled both the men’s and women’s fields down to 4 on Saturday. The gold and bronze medal matches will be played Sunday for both genders. A reminder of the money at stake, per pair and gender:

The big-picture match of the day came in the quarterfinals, where Vitor Goncalves Felipe and Evandro Goncalves Oliveira Junior knocked off Alison Cerutti and Andre Loyola Stein to advance to the semis. Andre and Evandro won the World Championship last year, and then together won the Ipatema 4-star in May before splitting up. So far, it’s been the block man, 6’10” Evandro, who has had the better luck with his new partner.

After advancing to the quarterfinals in Ostrava, the last 4-star, which Alison/Andre did not, Vitor Felipe/Evandro have moved on to the semi-finals (and eventually finals)FI this week in Warsaw thanks to a 2-0 (24-22, 21-12) win over their compatriots.

Then in the semi-finals, Vitor Felipe/Evandro swept Latvian pair and 2012 Olympic bronze medalists Janis Smedins and Aleksanders Smoilovs 2-0 (21-19, 21-15). Last year, Evandro and Andre swept Smedins/Smoilovs in the Round of 16 at the FIVB Beach Volleyball World Championships, and Evandro has carried that level of success through to his new pairing. While this was the two pairs’ first matchup this year, Evandro individually now has a 6-match winning streak over the Latvians.

In the other semi-final, Poland’s Piotr Kantor and Bartosz Losiak beat out Alexander Brouwer/Robert Meeuwsen by a 2-1 score (21-17. 17-21. 15-12). Coming into the day, Brouwer and Meeuwsen had far fewer points on their legs at the tournament so far, but a 60-point second set that finished about 4 hours before their semi-final.

This marks a second-straight final for Kantor/Losiak after a runner-up finish at the 4-star in Ostrava last week.

In Sunday’s final, the Brazilians will have a significant height advantage, with Evandro standing 4 inches taller than Kantor, and Vitor Felipe having an inch advantage over Losiak. The Polish pair won the teams’ only prior matchup 2-1 – but that came all the way back in 2013: a very different iteration of both pairings.

Meanwhile, in the women’s draw, Germany’s Chantal Laboureur/Julia Sude advanced to the final via a 2-0 sweep of Brazil’s Agatha/Duda, makring the sets 21-16, 2-18. That came after earlier in the day also sweeping 2-0 (21-15, 21-18) the other Brazilian pair of Barbara/Fernanda in the quarter-finals.

Those wins exorcised some demons for the Germans, who have become their country’s spotlight team while the defending Olympic champions Kira Walkenhorst and Laura Ludwig take time away from the World Tour for giving birth and rehabbing injury. Labourer/Sude hadn’t beaten any of those 4 Brazlians since 2014, when they were all in different pairings.

They’ll be matched in the final against Canadian pair Heather Bansley and Brandie Wilkerson, who knocked off Americans Kelly Claes and Brittany Hochevar in the other semi-final 2-0 (21-17, 21-12).

This marks a 2nd-straight final for the Canadian pair; they lost to Czech veterans Barbora Hermannova and Marketa Slukova in the final last week in Ostrava in a hard-fought, 54-minute, 3-set final. Bansley/Wilkerson got their revenge by winning another 3-setter over their Czech foes on Saturday: this time in the quarterfinals.

The two other American pairs in the main draw were both eliminated in the knockout stages. Nicole Branagh and Kerri Walsh Jennings swept Sara Hughes and Summer Ross in the first Round of 16. That elimination meant that in 4 common tournaments since the Hughes and Claes, the greatest pair in NCAA beach volleyball history, split, each former partner has advanced further than the other twice.

Branagh and Walsh Jennings then beat Brazilians aria Antonelli/Carol 2-0 in the second Round of 16, but fell 2-1 to Agatha/Duda in the quarterfinals.