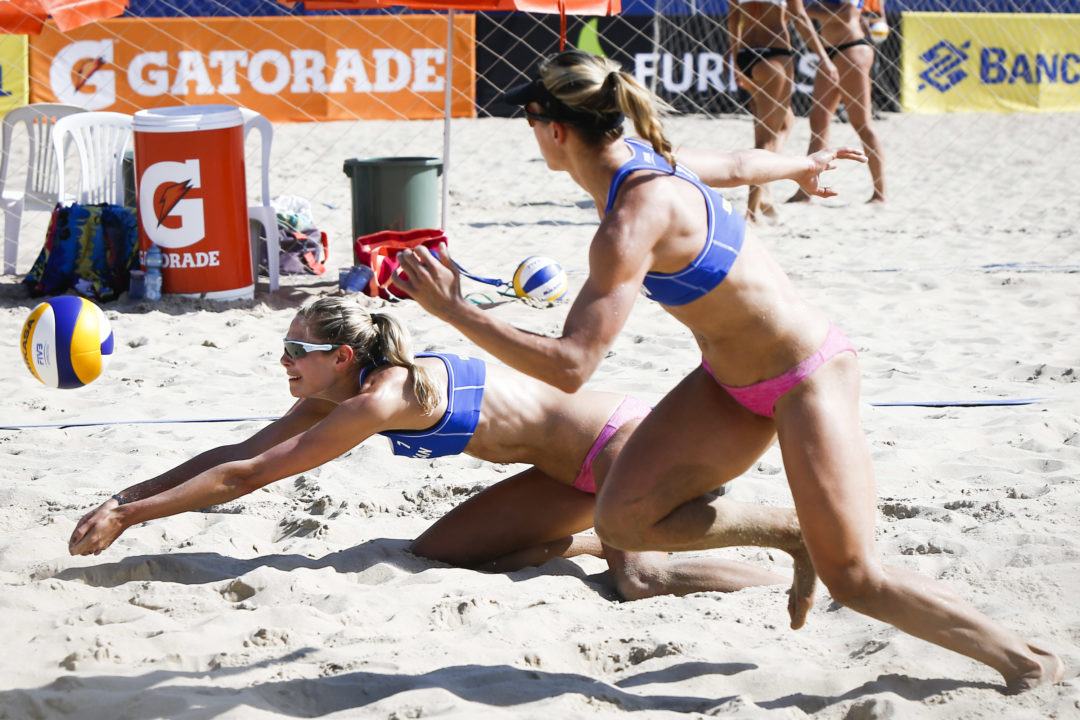 Sarah Pavan and Heather Bansley were Canada's most successful pair in Rio, advancing to the quarterfinals before being eliminated by the eventual Olympic champions. Archive Photo via FIVB

“The centre will focus on affiliated ‘next generation’ beach athletes, and training locations may vary according to the athlete’s plan,” a release from Volleyball Canada reads.

“This is an opportunity to provide a high-quality training environment and allow the athletes to pursue their studies in their home province,” explains Volleyball Canada’s beach volleyball high-performance director, Ed Drakich. “It’s very important to keep the next generation of beach players engaged in the system and on the track for success at the NORCECA, FIVB and ultimately Olympic level. This is one part of the puzzle and we hope to expand the program in the future.”

Canada sent the maximum 4 beach volleyball teams to the 2016 Summer Olympics – two male and two female pairs. Josh Binstock and Sam Schachter were eliminated in the preliminaries of the tournament, while Ben Saxton and Chaim Schalk were eliminated in the Round of 16. In the women’s draw, Heather Bansley and Sarah Pavan won their preliminary group, and moved on to knock out Canada’s other pair, Jamie Broder and Kristina Valjas in the Round of 16. Bansley/Pavan would then fall to the German buzzsaw that was Laura Ludwig and Kira Walkenhorst, who in 2016 won Olympic, European, and FIVB World Tour titles.

More details about the Centre of Excellence are below, Courtesy Volleyball Canada:

Athletes are committed to integrating both a beach and indoor volleyball season. Their annual planning will include:

As such, an annual periodized double peak plan for these affiliated “next generation” athletes will be supervised by VC/Regional Centre of Excellence in collaboration with USports/CCAA hosts programs.

“Three years ago, Volleyball Quebec started creating a systematic, sustained, fertile environment for Quebec beach volleyball athletes to develop to their fullest potential. This began by the hiring of a world class full-time head coach/technical adviser in Vincent Larivee,” said Martin Gérin-Lajoie, executive director of Volleyball Quebec. “We are honored that VC is recognizing this quality environment and this is an important milestone for our program. We are confident that this Regional Centre of Excellence will contribute to elevating the game of affiliated ‘next generation’ athletes from Quebec and beyond as well as representing a tremendous boost for the even younger athletes pushing behind.”

To help launch the project, Volleyball Canada is providing $15,000 in funding for the Regional Centre of Excellence plus approximately $12,000 in VIK to the affiliated “next generation” athletes.