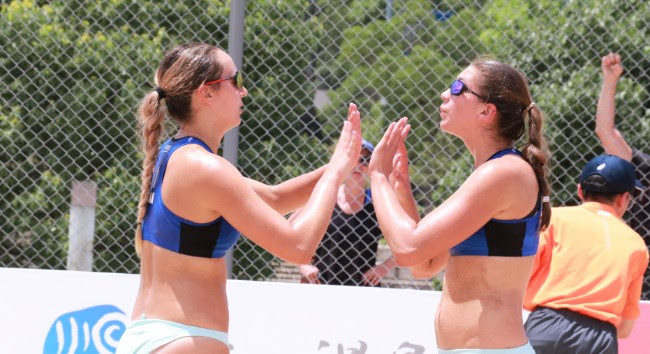 Canada will only send a girls' team to the tournament: the pair of Erika Vermette/Dana Roskic, who finished 5th at the 2018 U18 FIVB Beach Championships. Archive Photo via Volleyball Canada

Volleyball Canada has named their roster for the beach volleyball tournament at the 2018 Youth Olympic Games. Canada qualified just a women’s team, but no men’s team, for the tournament.

Erika Vermette (St. Vital, MB), 17, and Dana Roskic (Toronto, ON), 18, will be Canada’s team for the tournament. The same pair represented Canada at the 2018 FIVB U19 Beach Volleyball Championship, where they finished tied for 5th after losing to Russian pair Bocharova/Voronina in the quarterfinals.

The pair received a spot via a reallocation of a previously-unused spot after an otherwise-qualified team declined their place in the tournament.

Volleyball Canada assistant coach Adriana Bento will be the team leader for the event.

“I am honoured to represent Canada and to see all my training and efforts come together to compete in the Youth Olympic Games. This will be an amazing opportunity as I aspire to be an Olympian! I am super excited to be going with all the other athletes from Canada, and looking forward to meeting all the other athletes from other countries. I am sure this will be a life changing experience. It will be inspiring. I am thankful to my partner, coaches, associations and all those who have supported me!” – Erika Vermette

“My partner and I have had the privilege to represent Canada internationally before. Undoubtedly, this was one of the most unique experiences, filling me with feelings of pride and responsibility. Once I got a taste of it, I wanted to work even harder to present myself with an opportunity to do it again. The phone call announcing that I will be representing Canada at the Games left me absolutely speechless. Representing my country at the biggest event in sports history is overwhelming and shocking all at once. I’m particularly excited to get to experience the atmosphere of the Games, the tough competition and the competitors from all over the world! I am grateful for being given this tremendous honour as this truly is a once-in-a-lifetime opportunity. The experience will forever be etched in my memory and it will continue to drive my pursuit of excellence.” – Dana Roskic