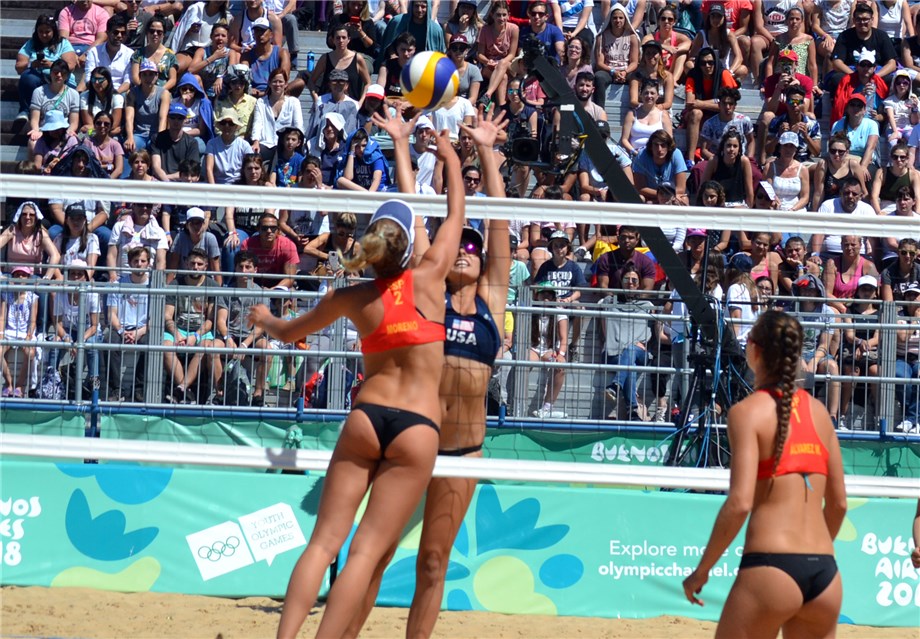 Devon Newberry and Lindsey Sparks beat Spanish duo Alvarez/Moreno 2-1 (21-19, 17-21, 15-9) to book a ticket to the competition's semifinals. The win comes with a special flavor for the American duo, as it was against the same Spanish team that knocked them out of the podium at the 2018 FIVB U19 World Championship in July. Current Photo via IOC

Next for the Americans will be Italian duo Scampoli/Bertozzi. This will be the second time this season the two duos meet, as Newberry/Sparks posted a 2-1 (23-21, 15-21, 15-11) victory against the Italians at the same FIVB World Championship. Current U19 World champs Veronina/Bocharova (Russia) will play the other semifinals against Norway’s Olimstad/Berntsen.

In the boys’ competition, USA’s Tim Brewster and John Schwengel were eliminated after their 2-0 (21-18, 21-12) defeat to Dutch pair Groot/Immers. Although the young tandem must be surely disappointed with the result, they made a deep run in a tournament that no one were betting on them, which shows just how much they have improved lately as a partnership. After their Buenos Aires performance, American fans should be excited about the future of these 2 young players.

Current U19 World Champs silver medalists John/Pfretzschner (Germany) were also eliminated, losing to Sweden’s Ahman/Hellvig, meaning that all three boys’ podium teams at Nanjing are out of medal contention in Buenos Aires.

Tough loss today to the Netherlands means our Youth Olympic Games tournament has come to an end. Losing is never easy but I am very proud of our 5th place finish here in Buenos Aires! We worked so hard for these games and left it all out on the court. This tournament has been absolutely incredible and the greatest experience of my life! I will cherish these memories for the rest of my life. I have enjoyed every second of it and I can’t wait for what the future has in store. Thank you to @johnschwenggg for sticking by my side and battling with me. And thank you to everyone else who has helped and supported us on this journey from the beginning. I am forever grateful! Now it is time to enjoy the rest of these games and experience it all!

Very tough loss to a great Netherlands team, so ended @buenosaires2018 @youtholympics with a 5th place finish. Truly amazing tournament, and I can’t wait to get out and start competing again