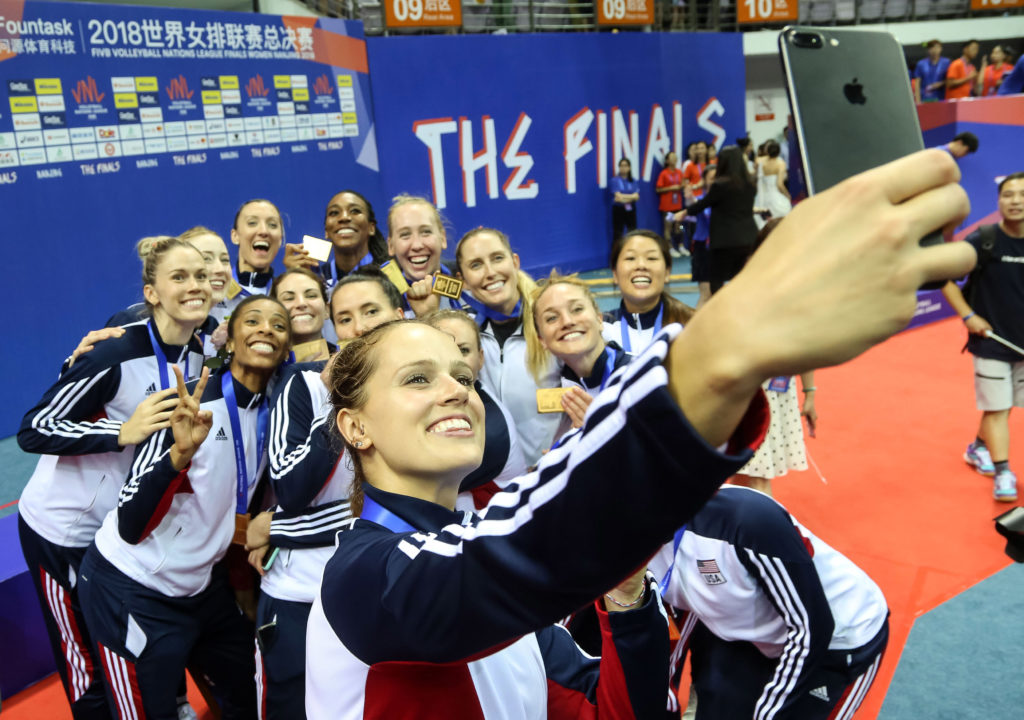 With the 2018 FIVB Volleyball Women’s World Championship coming up on Saturday September 29th in Rome, Italy and Varna, Bulgaria,... Current Photo via FIVB

With the 2018 FIVB Volleyball Women’s World Championship coming up on Saturday September 29th in Rome, Italy and Varna, Bulgaria, Volleymob’s Jeremy Brahm will provide his view on where each of the women’s national teams ranks going into play.

His ranking system uses match results on a daily basis from FIVB events (World League, Volleyball Nations League, World Championships (and its qualifying tournaments), Grand Champions Cup and World Cup), the Olympics (and its qualifying tournaments) and Continental Championships (and its qualifying tournaments) for the last four years. A point is awarded for each set won (maximum of 3 points), and additional points are awarded for the points ratio up to 1 point (winning by 25 points or more (1 set)). If teams play opponents outside of their confederation, there is multiplier to the original score (the two confederations divided in half) and then the rank of the team is multiplied as well. In general, winning an international match will give a team 9-14 points, while winning a continental match will give a team 3-8 points. Friendly matches are not included in the team point totals.

Points are weighted to most current results with the following calculations:

Confederation Multipliers for 2018 are as follows:

Using these methods, when looking at the results from 2003 to last weekend’s CEV European Championship Qualifying, the higher ranked team has won 78.52% of the time. With this said, where are the teams ranked prior to the World Championships? 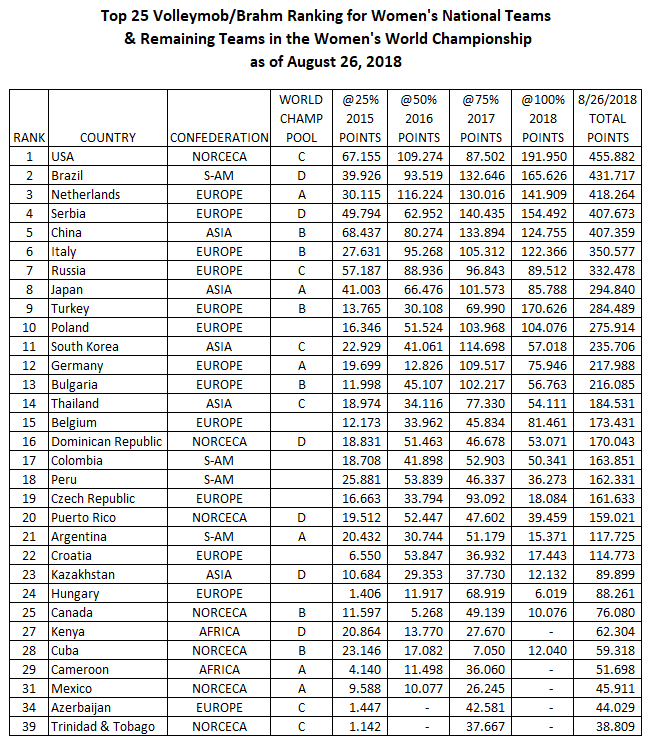 The USA women’s national team is currently the top ranked team according to my ranking system. This is due to their winning of the 2018 Women’s Volleyball Nations League in July. The started the VNL ranked 4th, but with only two losses in their entire 19 match VNL campaign, all of their wins enabled the USA to climb into 1st.

Brazil is second but their two losses in the semifinal and 3rd place match probably kept Brazil from taking the top spot. Additionally, Brazil had the championship in the 2017 World Grand Prix and a second place finish in the Grand Champions Cup.

Third is the Netherlands. They have been very consistent the last three years in reaching an Olympic semifinal, and the Final Rounds of the World Grand Prix in 2017 and VNL in 2018. I do not think that they have hit a wall, just that the margin for error with the top teams is very slim.

Serbia is fourth and followed closely by China in 5th.  China started the VNL as the top ranked team in my ranking system. However with Zhu Ting missing some matches early in the VNL, China lost 8 matches in the preliminary round and dropped them down the standings. Serbia took advantage and have jumped 1 spot from 5 to 4.

Still if you asked me if any of these top 5 teams could best each other, the answer will be yes and why the World Championships will be so exciting to watch.

Italy follows in 6th, Russia in 7th and a big drop to Japan in 8th. Turkey in 9th have had an amazing run this year starting the VNL in 18th place and their second place finish made them jump 9 teams in less than 2 months. Poland in 10th is the first team to miss the World Championships in my rankings.

From looking at the rankings above, Pool B with China, Italy and Turkey will be the Group of Death for me at the World Champsionships because, if one of those teams lose twice in the first round, they will have to sweep their four opponents in the second round, just to have a chance for the third round. However, the USA and Russia will very likely be teams that they will need to beat. Then they will probably need the USA and Russia to lose again. Each of these matches will have added tension in both first and second rounds.

VolleyMob will be presenting some data soon to show which teams have chances of advancing to the second round based on their VolleyMob/Brahm rankings.