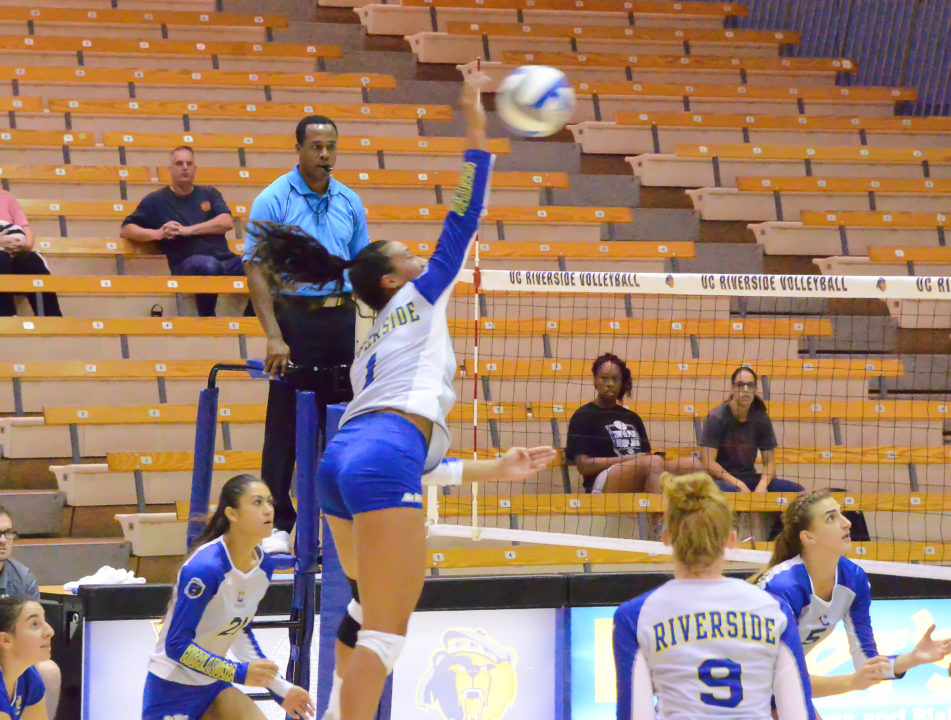 Seven nominees registered more than five kills per set and four of those chimed in with more than two digs per set. That is not to mention the seven players who averaged more than six digs per set. Needless to say, it was a close race for the Week 1 VolleyMob Player of the Week honor.

In the end, our selection put up record breaking numbers. As an added bonus, 33 of her 80 kills came against her former team.

Senior outside hitter Kaiulani Ahuna averaged 6.67 kills and 3.67 digs per set, while hitting at a .364 clip and also adding five blocks en route to Big West Player of the Week honors as UC Riverside topped Montana (3-1) and UMass Lowell (3-0) and fell to Eastern Washington (3-2). Friday afternoon, Kai broke the UCR program record (25-point set era) with 30 kills against Montana, which was the most by any Highlander since 2012.  She also led the team in attack percentage at .452 and showed off her versatility scooping up 14 digs, which ranked second on the team. The following evening, Kai again posting 33 kills against Eastern Washington, for whom she played in 2015 and 2016, to break the UC Riverside’s record for single match kills (since joining the Division I ranks in 2000). She also became the only Highlander ever to post 30+ kills on back to back days. Ahuna wrapped up the weekend with a 17-kill, seven dig effort while hitting .333 against UMass Lowell.

Averaged 8.7 digs per set as Michigan topped High Point and Auburn en route to MVP honors at the War Eagle Invitational; Made good on all 21 serve reception tries, while also adding nine assists (1.50 per set); posting 28 digs, five assists vs. High Point and 24 digs and four assists vs. Auburn. Big Ten Defensive Player of the Week

Averaged 6.78 digs per set; notched career-high 34 digs in five setter vs. James Madison; tacked on 27 in win at Howard on Sunday and 31 in five set win at VCU on Monday; made good on 97.4 percent of reception chances. American Defensive Player of the Week

Averaged 4.43 kills, 2.57 digs and 1.00 blocks per set while hitting .276 in a pair of wins; Earned tournament MVP honors after leading all hitting with 31 kills on a .276 hitting effort; notched 16 kills against VCU and added a 16-kill, 10-dig double double and four blocks against NC State

Averaged 6.58 digs and 1.42 assists per set as the Greyhounds went 2-1 at the Baltimore Bash. Set Loyola school record for digs in a match with 41 in the finale against Towson; started the weekend with 13 digs against Siena, added 25 against Radford. Patriot League Co-Rookie of the Week

Averaged 11.5 assists and 4.00 digs per set, while posting three double-doubles. Notched 49 assists, 15 digs in opener vs. South Dakota; added 43 assists, 22 digs, 2 blocks and 2 aces vs. New Hampshire; finished weekend with 46 helpers and 11 saves vs. Milwaukee; tallied five blocks and four aces on the weekend; Big Ten Freshman of the Week