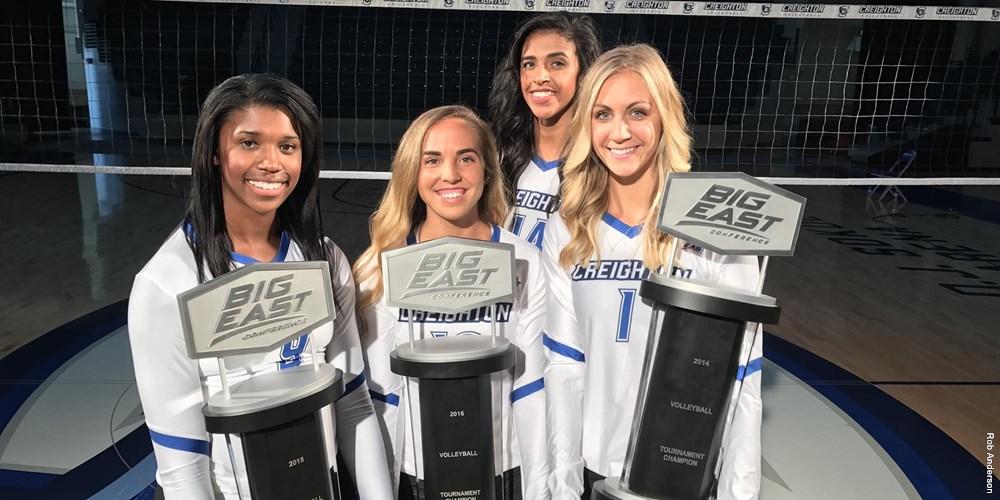 The road goes through Creighton to win the Big East, but Marquette looks as good as any challenger the BlueJays have had. Archive Photo via Creighton Athletics

The 2018 volleyball season kicks off tomorrow, and to move closer to the season we have already previewed the ACC, Big 12, Big Ten, Pac-12, SEC and WCC. To round things out today, we discuss the Big East, who appears to have two legit candidates who could win the league if things go their way.

Creighton: The BlueJays have not lost the Big East since entering it several years back, and now may have their most stern test in that regard with Marquette. 2017 was a bit of an awakening that the Golden Eagles would be on Creighton’s tail after Marquette earned a sweep victory toward the start of league action. The BlueJays then swept Marquette later in the year at home before squeaking by them 3-2 in the Big East Tournament Championship. It should be more of that this season between the two.

In terms of what they bring back, four starters plus the libero return. Some freshmen additions plus depth should give Creighton a very strong front court presence of hitters and blockers, led by former Big East Player of the Year Jaali Winters. The question will be about who is passing them the ball on second contact after All-American setter Lydia Dimke departs. When she was injured last season it presented the team with plenty of challenges, so if they cannot develop another setter it should be Marquette’s league. Otherwise, Creighton could defend their crown.

Marquette: The Golden Eagles are the up-and-coming challenger, who have found success in making NCAA Tournaments and high finishes in league play in recent years. Now they appear to have a true contender to win the conference and potentially host in the first two rounds of the NCAA Tournament – something that the winner of the league seems likely to do since both of these teams should hover around that area.

All six starters plus the libero are back for Marquette in making them a challenger for the Big East. They should be ready for a stronger than 7-7 mark in non-conference too (albeit last year’s slate was brutal). They’ve got their own Big East Player of the Year at the pin in Allie Barber to surround her strong supporting cast. The debate between these two should rage on throughout the season. More likely than not, a shared conference title would be the expectation.

Butler: The Bulldogs wound up third in the Big East in 2017 at 23-8 (13-5) and now return five starters for 2018. They shouldn’t be forgotten in this conversation, and at the very least should contend to be an NCAA Tournament team this season. They do have a couple of key pieces to replace, but overall the Bulldogs will be led by Anna Logan on the pin and Bri Lilly in the middle and they had the top defense in the league last season. If they can find a few more offensive options, that NCAA Tournament could be coming.

Villanova: The Wildcats were fourth in the league last season at 18-12 (11-7) and look to be right around that mark this go around as well. The offense was solid while the defense was below average, so if they want to reaffirm their spot in the Big East Tournament they’ll look to improve that side of the ball. Amanda Pedersen-Henry in the middle should help.

Seton Hall: Keeping things consistent with last year’s standings is Seton Hall, who finished one match back of Villanova for that cut-off point in the Big East Tournament. That came despite them being seventh in hitting percentage and eighth in opponent hitting percentage in the league, so there’s definitely room for growth as Abby Thelen might be a dark horse Big East Player of the Year candidate if she can carry the load offensively for the Pirates and push them to the top four.

St. John’s: Quietly, Erica DiMaulo has been one of the top setters in the Big East the last two seasons. The key will be finding consistent options around her to terminate her assist attempts, while pass and serve has been a clear improvement that the team has been working on this offseason – they were seventh in the league in aces and digs in 2017. If they can be more aggressive and accurate at the service line and more scrappy defensively, they could sneak into the top four or five.

Xavier: Known for their high-paced, fast attack, Xavier is an interesting matchup in the Big East. They worked to eight victories last season and seemingly are always a team that can reach up the standings to upset someone. Last year they weren’t getting the quality looks they wanted offensively though and hit just .193, but if the offense improves they could be a thorn in the side of the top half schools.

Ten Big East matches to keep an eye on:

Of course, several others could be included on this list, and a handful of players are set to breakout in 2018. Considering team projection, player production from past seasons and role in 2018 though, here are five players to watch for Big East Player of the Year as we embark on the season’s start (sorted alphabetically by last name):