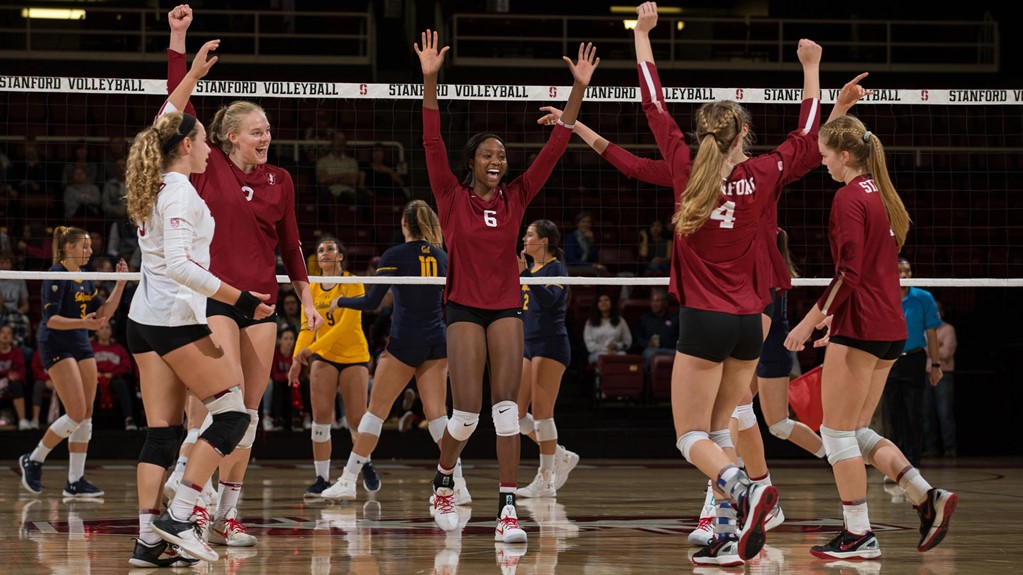 Stanford looks to claim the Pac-12 title once again in 2018. Archive Photo via Stanford Athletics

“After Stanford, I think it remains to be seen how the rest of the league shakes out.  Most of the top teams return a good deal of talent but each also have a few question marks losing key contributors to graduation.  This year might see more parity than most.” – Colorado head coach Jesse Mahoney.

Stanford: The Cardinal are the clear-cut favorite – both in the Pac-12 and nationally – as they return five starters plus the libero to a team that made the Final Four one year following a National Championship. That includes AVCA Player of the Year Kathryn Plummer, who is as unique as they come as a 6’6″ six-rotation outside hitter. She should be unstoppable once again with other All-American level options in 6’8″ pin Audriana Fitzmorris, quick-twitched middle Tami Alade and much more to go around elite setter Jenna Gray. They also have a couple of stud freshmen joining the roster along with some former bench/role players ready to impact things.

They obviously have all the firepower you could want, and have two great back-row defenders in Morgan Hentz and Kate Formico. If they can collectively pass and serve at an even higher level, it could be lights out for their competition. After going 19-1 in Pac-12 action in 2017, it’s not unreasonable to think the Cardinal could go 20-0 this season. Still though, with all of the high-level opponents and road environments, it will be incredibly hard to go unblemished or maybe even repeat 19-1, but the Cardinal look ready to defend their Pac-12 title nonetheless.

USC: Maybe Plummer’s top competition for Pac-12 Player of the Year lies in Khalia Lanier, the star pin for the Trojans. She leads the way, but the Trojans need to develop more options than 2017 when they were fifth in the league in hitting percentage. They showed signs of that in the NCAA Tournament with Brooke Botkin, but will need more consistency from her in 2018. They also need others to step up, whether it’s some talented freshmen or transfers – like Emily Baptista – they brought in, as they look stronger than last year.

If that happens and they get a boost in their block, they should stick around the top 10 nationally and with Stanford near the top of the league. The block could be a lot to ask after they ranked 10th in the Pac-12 in blocks per set in 2017 though. As noted by new USC head coach Brent Crouch, “the part of our game that may start slow but become a strength as we improve will be our blocking. It’s a whole new system from last year, and because blocking is complicated, it will take a while to get really good at, but in the end we will be much improved.” They should improve at least a bit with the addition of Jasmine Gross, but that improvement will be the key to the season and whether USC finishes in the top two of the league or winds up in the three to five range.

UCLA: The Bruins had one of the top defenses in the Pac-12 last season, but this year they’ll be looking to make a move forward with an offense that hit .238 in 2017 – good for just seventh in the league. On the down side, they lose All-American setter Sarah Sponcil and outside hitter Reily Buechler, but also four starters plus the libero are back. They’ve got a budding star at each level, with Zana Muno at libero, Mac May on the pin and Madeleine Gates in the middle. Jenny Mosser had a solid freshman year on the pin and they tack on freshman Lexi Hadrych too, so they’ve got potential. It’s a lot to ask for players to fill what they lost offensively though with so much youth, but they could be just as good on defense so they should be a consistent force near the top of the Pac-12.

Oregon: The Ducks have compiled a string of high-level recruiting classes that could come to fruition in 2018 after they danced with the idea early in 2017 but faltered a bit in the middle to late portion of the season. Another comes into the fold this year with all kinds of contributors returning. That gives them depth – which is much needed in the long Pac-12 road – and plenty of options to not be one-sided. The difference between them being a fourth or fifth place team in the league and moving into that top two or three will be if one or two of those quality players turning into stars, which could very well happen for the Ducks with a player like Ronika Stone, Jolie Rasmussen or Lindsey Vander Weide.

Washington: The Huskies have one of the more difficult teams to project in 2018. They lost a ton of their top starters as seven senior graduated, but also bring back a plethora of athletes who at least have some starting experience. That means they’ll be looking for breakout performers. Steady contributors back who could fit that billing are Kara Bajema, Lauren Sanders, Avie Niece and Shayne McPherson with more potential breakout players with Ella May Powell, Shannon Crenshaw and Samantha Drechsel. Therefore, they’ll have the talent, youth and depth, but 2018 might be more about building toward a special 2019/2020. Still, they should at the very least be a top half team who has the ability to knock off the top-notch teams on any given night.

Colorado: The Buffaloes may be the ultimate dark horse in the conference, because they don’t have the recent hype of a team like Washington or UCLA. But last season they broke out and this year they bring back five starters including star pin Alexa Smith. She could fit the billing of what Adora Anae was for Utah last season as the Utes were highly competitive in the league and she had an amazing individual season. It’s not just about Smith though, with Naghede Abu leading the block and Brynna Deluzio progressing to her sophomore season. They ended 2017 on a hot streak too, so the expectation is to take that into 2018. If they can receive all-around improvement from a year of progression, they could challenge for a top three or four spot in the Pac-12.

Washington State: The Cougars have made back-to-back NCAA Tournaments, although last season was quite bubblicious. Now they return five starters including star middle blocker Taylor Mims, who took on an unbelievable load for the team last season. She should be a mainstay once again, but what will separate Washington State’s season from more bubble talk versus rising the ranks will be her teammates offensively and who else can step up consistently.

Utah: The Utes reached the Sweet 16 behind star play from Adora Anae and All-American middle Tawnee Luafalemana, but now both are gone. Still, they do return a solid group from that cast of characters led by Berkeley Oblad and Bailey Choy. That should help them to be an NCAA Tournament team once again, but losing such a key pillar in Anae will be tough to replace.

Oregon State: The Beavers would have been one of the more intriguing teams in the league had Kylee McLaughlin, the 2017 Pac-12 Freshman of the Year, not transferred to Oklahoma. That would have given them five starters back to an NCAA Tournament team that peaked toward the end of Pac-12 action, but instead now they lost their two best players in her and Mary-Kate Marshall. Beyond that, enough is back for Oregon State to remain competitive, but they’ll need some breakout players to make the NCAA Tournament once again.

Arizona: The Wildcats made the Sweet 16 in 2016 then had to reboot last year in terms of returning players. They suffered the results by going 5-15 in the Pac-12, but now they can reap their rewards of more experience with all of their starters back. Obviously you can’t just be experienced and you have to mix that with strong play, but it’s fair to expect a jump from the Wildcats in their play, so it wouldn’t be unreasonable to think that they could crack the top eight in the league if a few plays go their way.

Ten Pac-12 matches to keep an eye on (since there are so many high-level teams we cheated a bit and included pairs of matches):

Of course, several others could be included on this list, and a handful of players are set to breakout in 2018. Considering team projection, player production from past seasons and role in 2018 though, here are five players to watch for Pac-12 Player of the Year as we embark on the season’s start (sorted alphabetically by last name):