VolleyMob’s Coach of the Year Watchlist 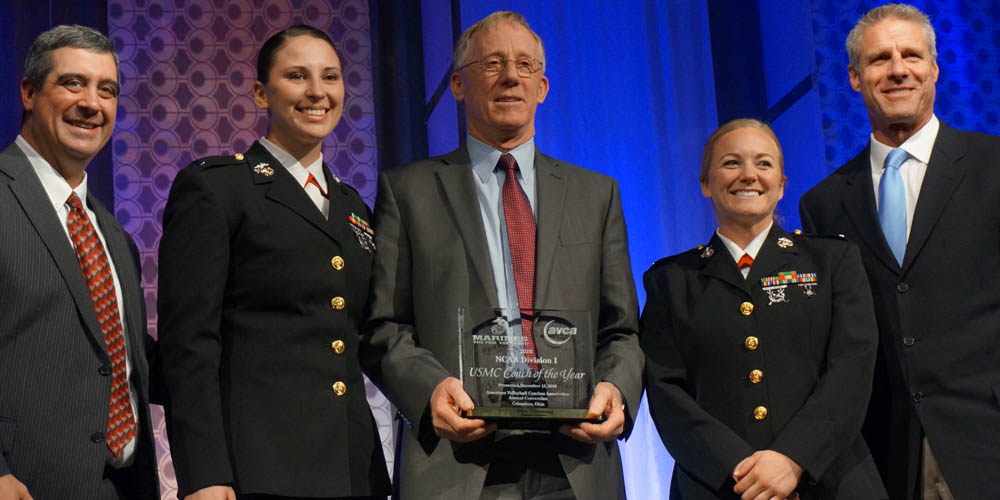 As conference season winds down, Coach of the Year nominations are becoming more apparent. Check out our Coach of the Year watchlist for our top nominees, in no particular order. For more mid-year watch lists, see our candidates for National Player of the Year here.

In just his second year as head coach at Colorado, Jesse Mahoney‘s squad is making noise in the Pac 12. This season the Buffs have notched wins against Illinois, Colorado State, Oregon, USC and most recently, Washington for the first time in Colorado history. Improving on a 9th place finish in the Pac 12 last season, Colorado is currently ranked at #5. All of this comes in spite of losing star Gabby Simpson on a transfer.

Buffs sweep the Huskies for the first time EVER !!! pic.twitter.com/p76XtvJ2pg

As a first year head coach of the reigning national champions, Kevin Hambly had a strong core of players to work with. Nonetheless, he has led the Cardinal to an incredible 21-3 record going undefeated at home in 8 matches. Stanford is poised to take the Pac 12 conference crown and are in the running to host a regional for the NCAA tournament.

After graduating 4 senior starters and an early injury to setter Kelly Hunter, the Nebraska faithful had tempered expectations of this year’s squad. However, the Huskers have secured a 21-4 record and are tied with Penn State at the top with a 14-1 conference slate. Nebraska is in a great position to secure hosting privileges for one of the four regionals for the NCAA tournament.

Following a successful stint at Loyola Marymount and the 2016 Rio Olympics, Tom Black has continued to bring out the best in his team at Georgia. In his first season, freshman T’ara Ceasar has already accrued 5 SEC Freshman of the Week honors. After a losing season in 2016, the Bulldogs are 18-9 and 8-6 in conference.

Mary Wise is no stranger to success with 22 SEC conference championships and other countless honors. This year’s Florida squad has continued to build on that success with strong signature wins against Texas, Nebraska, North Carolina, Florida State, Texas A&M and Kentucky. The Gators currently stand at 21-1 and are poised to snag a hosting spot for one of the four regionals.

Christy Johnson-Lynch has been a long time staple at Iowa State and her experience is showing this season. She’s led her Cyclones team to a 18-5 conference record with wins against Pittsburgh, Creighton, Wichita State, Kansas, and Kansas State. With four conference matches left, the Cyclones will look to continue their success. Ranked at #24 in the AVCA poll, the Cyclones will be a tough matchup for any team in the tournament.

With November volleyball about to begin, @CJohnsonLynch sits down with @JWcyclonestv to discuss whats going on in ISU Volleyball! #Cyclones pic.twitter.com/kOxdk8gkRB

As a former national champion as a player and a coach, Dani Busboom Kelly knows what it takes to get to the top. She’s been able to translate that expertise to her team, coaching them to a 19-6 record and a 6 win streak. With upcoming matches against UNC and NC State, this Louisville squad will be battle tested heading into the tournament.

Kentucky’s schedule this year has been brutal, but the Wildcats have come through with key wins against USC, Utah, Louisville, Texas A&M, and Florida. Battling with Florida for the SEC title, Kentucky is further cementing its national presence as a volleyball school.

With over two decades of coaching experience under her belt, Melissa Stokes has all the tools to help her team succeed. Missouri State currently holds a 23-5 record overall and a perfect 15-0 Missouri Valley conference record. Looking to close out their conference slate undefeated, Missouri State will be a difficult opponent for any team.

After graduating the 2016 National Player of the Year some teams would have a let down, but not Hugh McCutcheon‘s Minnesota squad. Despite starting a bunch of new and young players, the Golden Gophers have racked up top wins against North Carolina, Louisville, Texas, Wisconsin, Purdue, Ohio State and Illinois.