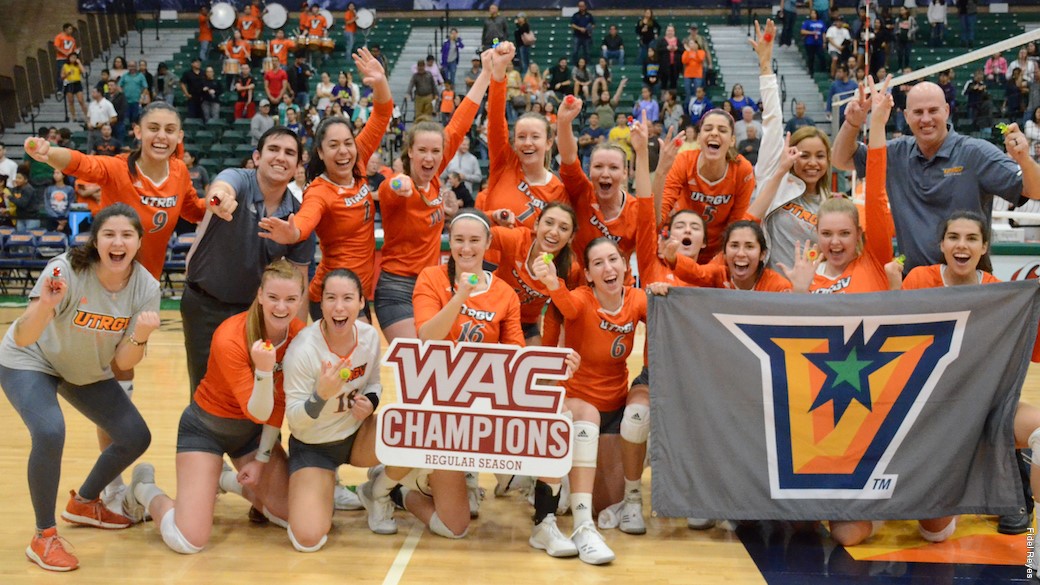 The Western Athletic Conference has announced the bracket for the league's tournament, which is set for Nov. 22-24, behind first time regular season champion UT Rio Grande Valley and No. 2 seed New Mexico State.  Current Photo via UTRGV Athletics

DENVER – The Western Athletic Conference has announced the bracket for the 2018 WAC Volleyball Tournament Nov. 22-24 at the Icardo Center in Bakersfield, Calif.

UT Rio Grande Valley is the top seed for the first time in program history after winning its first WAC regular-season title. The Vaqueros are led by Ragni Steen Knudsen, who leads the conference in WAC matches in kills per set (4.27) and points per set (4.79), and middle blocker Alexandra Ecker, who ranks sixth in the WAC in hitting percentage (.306) and seventh in blocks per set (1.13). Libero Gysell Zayas ranks fifth in WAC matches with 4.88 digs per set.

NM State is the No. 2 seed after finishing 12-4 in WAC play. Senior Tatyana Battle leads the Aggies with 3.62 kills and 3.11 digs per set in WAC matches and a WAC-best 18 double-doubles on the season.

The third seed goes to Kansas City. The Roos are led by Tyrecia Lukes, who leads the WAC in hitting percentage (.399) and ranks second in blocks per set (1.55) in league play, and Alicia Harrington, who averages 3.30 kills per set in WAC matches.

Utah Valley earned the No. 4 seed. The Wolverines are led by true freshman Kazna Tarawhiti, who ranks second in the WAC in kills per set (4.22) and points per set (4.66) in WAC play, while middle blocker Makaila Jarema leads the league in blocks per set (1.92) in conference play.

Host CSU Bakersfield is the fifth seed. The ‘Runners have four players that averaged 2.00 or more kills per set in WAC play and Desiree Sukhov led the WAC with 0.44 service aces per set in league matches.

Seattle U made the tournament as the sixth seed after defeating Grand Canyon and CSU Bakersfield on the final week of play. The Redhawks were tied with GCU in the final standings but won the tiebreaker because they swept the series with the Lopes. Seattle U is led by Maja Stojanovic, who ranks third in the WAC with 1.32 blocks per set in league play.

The tournament begins on Thursday, Nov. 22, with the first match at 4:30 p.m. local time. All matches will be shown live on ESPN+. International viewers can watch matches on the WAC Digital Network at www.wacigitalnetwork.com.