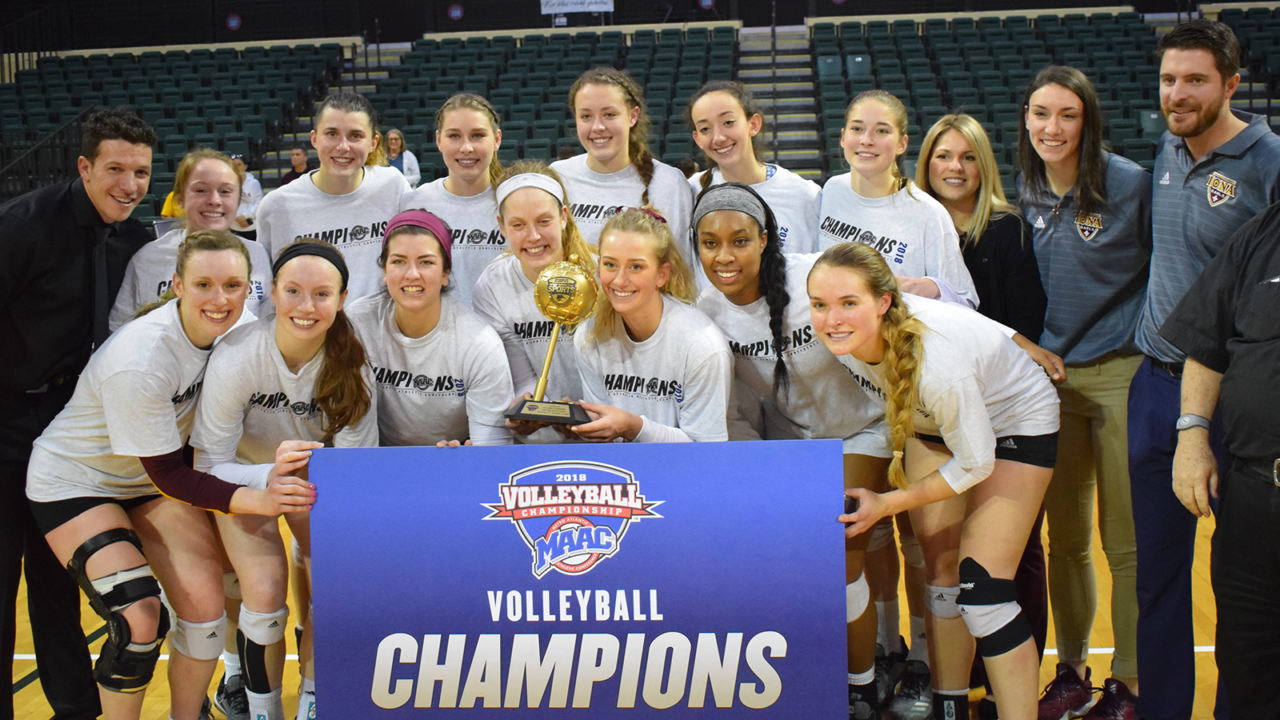 • Sofia Lopez Acosta picked up 30 digs for the second time in the championship.

The first set had 10 ties and seven lead changes. The Gaels had the first set point at 24-20 but the Golden Griffins rattled off five straight points to take a 25-24 lead. Iona ensured the first game continued with senior Claire Archibald delivering her seventh kill of the set to knot it up.

Iona got the serve back at 26-26. Canisius committed an attacking error to give the Maroon & Gold the advantage and sophomore Jamie Smith ended it at 28-26 with her fourth kill of the set.

Set two began with the same see-saw action of the first. However, Canisius grabbed momentum once it nabbed an 8-7 lead. The Golden Griffins went on a 5-2 run and a separate 4-0 run a spell later to force a Gaels timeout with deficit at 17-10.

Canisius closed out the second set, 25-18.  Iona had a negative hitting percentage, -0.26, in the set. The Golden Griffins hit .458, led largely by Sara Wesley and her four kills. Megan Woods had three kills. After a strong opening set, Iona’s leading offensive weapons, Archibald and Smith, had just one kill in the second set.

The Maroon & Gold began the third set like gangbusters. Iona won the serve from Canisius with a kill by Smith. Then senior Amanda Gannon took over at the service line. The Gaels scored six straight points and vaulted in front 7-0 and induced a Canisius timeout. Senior Mia Bonsignore had four kills and a block in the first half of the set as the Maroon & Gold went into cruise control up 14-3.

Bonsignore had six kills on seven swings in the third set. She also chipped in a dig and two block assists. Rose had all of Iona’s 16 assists in the game as Iona cruised to a 25-12 set three decision.

The fourth set had four ties and two lead changes, but none coming after Iona took a 9-8 lead. Rose served a significant run and put the Maroon & Gold up 12-8. The Golden Griffins got back within one at 13-12, but Iona went on another 8-2 stretch to make it 21-14. The championship was clinched with junior Tess Connolly putting home kill off an assist from Emma Rose.

HISTORY MADE
Senior Claire Archibald became Iona’s all-time leader in career kills in the first set of the match. She needed just four to take sole possession of the title and she used a phenomenal first set to pick-up another career milestone.

Archibald surpassed Miki Hogg ’05 on the all-time kills list. The two players are linked throughout the Gael record books. Both rank near to or above the top of the all-time rankings in kills, attack attempts and kills per set.

Iona will find out its opponent in the NCAA D1 Volleyball Tournament on Sunday, Nov. 25 at 8:30 p.m. The selection show is being aired on ESPNU.

The Canisius volleyball team could not complete the historic run in its first-ever MAAC Championship match, falling to regular-season champion Iona Saturday evening, 3-1, as the Gaels earned the Metro Atlantic Athletic Conference’s bid in the NCAA Tournament.

The second set saw the Blue and Gold give up the first point to the Gaels before taking the lead and never looking back. Using a .458 hitting percentage in the frame and holding Iona to a -.026 clip, the Griffs tie the match up with a 25-18 victory. Iona came out on fire in the third set with a 7-0 opening streak, rolling on to win the stanza with a 25-12 score.

In the fourth set, Canisius jumped out to a 5-2 lead, but Iona chipped away and took a 9-8 advantage. That was all the MAAC’s top team needed, clinching the championship with a 25-18 win over the Griffs to take the match in four sets.

Head Coach Lenika Vazquez‘s Postgame Comments
“We did not get the outcome we wanted today, but we lost to a worthy opponent in Iona. I’m just so proud of the team and what they accomplished this season and this weekend.”