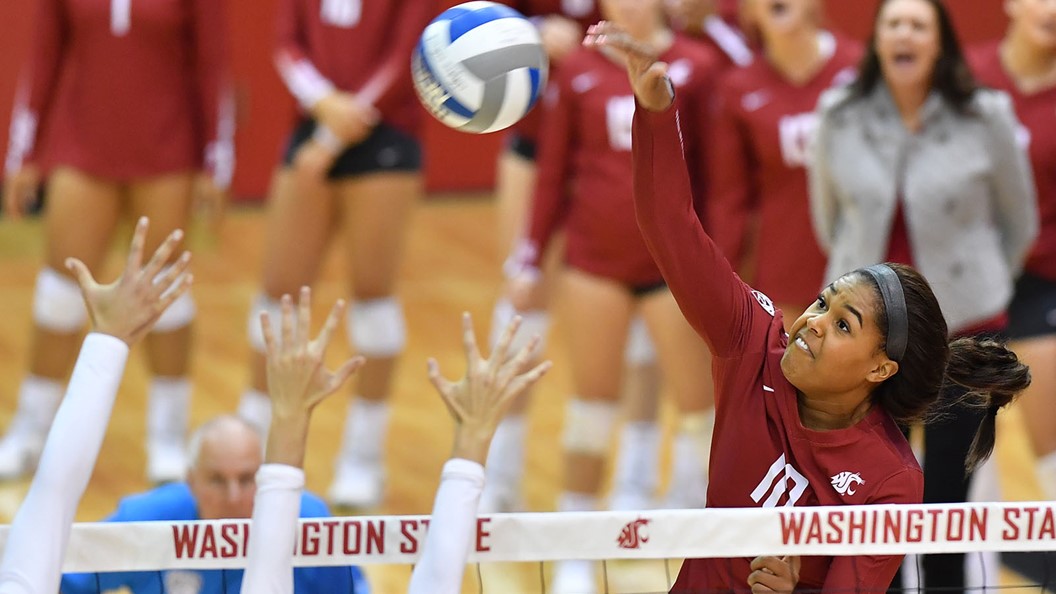 TUCSON – Washington State evened its Pac 12 record with a four-set win over Arizona with help from a balanced offensive attack and nine blocks.

The Cougars took an early 5-1 lead in Set 1 as Arizona committed three errors and Mims downed two kills. The score was level at 9 as Arizona clawed its way back with help from four WSU miscues. The teams traded points leading to seven more ties, last at 17-all. Down 17-15, Washington State put together a 5-0 run, including a kill and an ace by Dirige, to turn the deficit into a 20-17 lead. Kills by Savanah Smith and Urias upped the lead to four at 23-19. Arizona scored three of the next four, thwarting WSU’s first set-point try at 24-21, before committing a service error to give the Cougars the 25-22 victory.

Five WSU players turned in kills en route to a 9-5 advantage in Set 2. A trio of errors put the Cougars up five at 12-7. Arizona sliced the deficit to one at 15-14 with a 4-0 run, including two Washington State errors and kills by Dahlke and Cross. WSU broke away after a tie at 16 with a 7-2 run. A pair of Mims kills and two blocks helped the Cougars to the 23-18 lead. A Urias kill put the visitors on the hill at 24-19. Kills by Dahlke and McKenzie Jacobson kept things going, but a service error marked the final point of the stanza. Washington State notched four blocks in the stanza.

Arizona rallied late, coming back from a 19-14 deficit to steal away a 26-24 win and extend the match. Spriggs notched three kills as the Wildcats turned the five-point margin into a 21-20 lead. A Woodford kill and Wildcat attack error put WSU back on top 22-21. A Urias putaway and another UA miscue put Washington State ahead 24-23. Arizona closed out the win with a 3-0 run, including kills by Dahlke and Shelton and a final stuff by Dahlke and Cross. The set featured nine ties and seven lead changes.

The teams played to a knotup at 9-all in Set 4, with neither owning more than a two-point edge. The Cougars gained separation with an 11-3 run. Four different players registered kills in the stretch, including two each by Mims and Lajos. Aces by Mims and Urias also aided WSU in the run. An ace by Dirige and Arizona hitting error made it 23-14. A service error and triple block slowed Washington State, but a Woodford kill set up the final blow by Mims at 25-17.