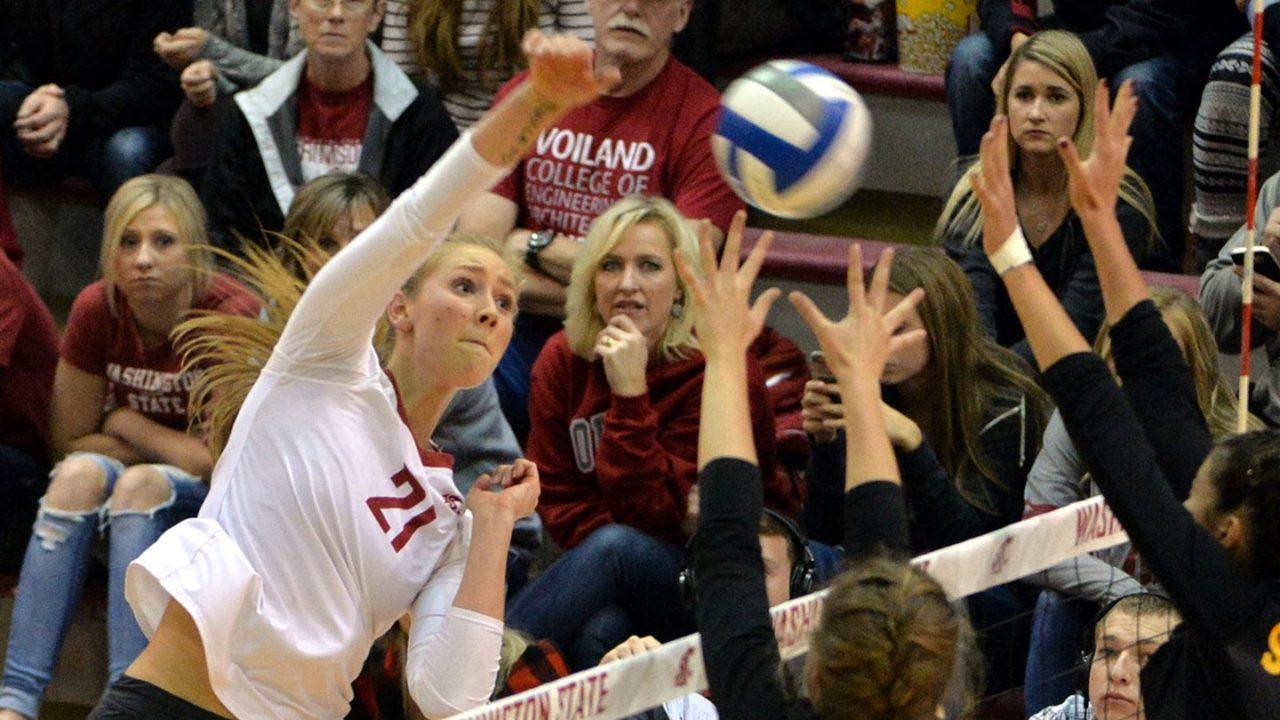 BOULDER, Colo. — Another strong blocking performance by the nation-leading Washington State volleyball team propelled the Cougars (20-10 overall, 10-8 in Pac-12) to 25-23, 25-20, 25-14 defeat of Colorado (13-15, 5-13) Sunday afternoon at the Coors Event Center. This was the first WSU win over Colorado at Boulder in the six times the schools have met.

The 20 wins season and 10 wins in conference action are the best records for sixth-year Head Coach Jen Greeny at WSU, and the most season and conference wins for the WSU program since 2002. WSU is tied with USC for sixth-place in the conference standing going into the final week of Pac-12 action.

WSU, the Pac-12 leader in opponent hitting, held the Buffaloes to a .051 hitting percentage while the Cougars hit 245 for the match. The Cougars tallied 13 blocks, seven coming in the third set, while the Buffs had a total of five blocks. WSU out-hit the Colorado 41 to 28 but were edged by the home squad in digs, 28 to 36. WSU served five aces in the one hour and 36-minutes contest.

“I’m really proud of our team and what they did today. I think our right side blockers did a tremendous job and Taylor Mims too,” WSU Head Coach Jen Greeny said. “I think we started pretty well and got the lead and then for whatever reason we’d get stuck in a rotation and let them back into it. But we did a nice job of holding them off, especially that first set and it’s always important to get the first set to put pressure on the other team. We settled in and got our timing right and especially in that third set clamped down on their hitters.”

BOULDER— In the final home match of the 2016 volleyball season, the Colorado Buffaloes put up a valent effort but was unable to hold off the surging Washington State Cougars, who took home a 3-0 (25-23, 25-20, 25-14) on Sunday afternoon.

Other Buffs who helped offensively were senior Katelyn Cuff and junior Joslyn Hayes, who each tallied four kills. At the net, sophomore Naghede Abu led CU with three block assists while Hayes and Cuff each posted a pair of blocks.

SET 1: The Buffs got off to a bright start, quickly taking an 8-4 lead. WSU responded with a four-point run to tie the score at 8. From there, the Buffs played from behind as WSU jumped to a 15-11 lead prior to the media timeout.  Coming out the break, the Cougars were able to widen their advantage to 18-12 before CU used its first timeout.  Colorado was able to rally and cut the gap to just one point (23-22). After a Cougar timeout, the two teams fought to the finish, but it was WSU who took the win (25-23).

SET 3: The intermission was not enough to slow down Washington State as it quickly went ahead 9-2.  The Cougars then ran up the score midway through the set to lead 17-10 after a timeout. CU attempted to rally but was unable to get much momentum going as the Cougars took the set 25-14.

NOTEABLE: The Buffs lead the all-time series between the two schools 9-3….CU celebrated its four seniors, Katelyn Cuff, Kiara McKibben, Cierra Simpson and Marie Zimmerman, prior to the match…The Buffs also had a moment of silence before the national anthem to honor Dan Apol (44), one of the most well-respected indoor, beach and sitting volleyball officials in the world, who passed away suddenly last week.

NEXT UP: The Buffs wrap-up the 2016 season next week with a pair of home matches. They will travel to Tempe, Ariz. to face Arizona State on Wednesday, Nov. 23. The final match of the season is slated for Friday, Nov. 25, against Utah in Salt Lake City, Utah.

QUOTABLE:
Jesse Mahoney, head coach
ON THE LOSS
“It’s difficult to lose, it’s difficult to lose when you don’t feel like you played very well. We still have two more matches. I still think we can play for pride. No one is happy with the result or happy with how we played. We’ll have a day off but we have to get back in the gym and prepare for an extra. We have to have a short memory and keep plugging away.”

ON SENIORS KATELYN CUFF AND CIERRA SIMPSON
“It’s unfortunate that I only had a year with all of our seniors. It’s frustrating and tough to lose on senior night. I don’t think it had anything to do with the effort or attention or focus of our upperclassmen. Katelyn [Cuff] has been battling her body her entire time here and has really been limited physically. It takes a lot for her to just get through practice much less a season. The passion she has to play this game really drives her and that is really special that I think people don’t see from the outside and that I see and have appreciated in the time I’ve been with her. It’s something. Cierra [Simpson] is one of my favorite kids I’ve ever coached. She’s all about getting better every day. She has no distractions with how she goes about playing and wanting to be successful. She is a great player and will continue to be a great player if she plays the game going forward. But she is going to be great in whatever she chooses to do with her life. She is so driven and so focused. I’m personally going to miss that and hopefully our team has let some of that rub off on them. Hopefully they’ll look back at these players and see how much they’ve given this program.”

ON GABBY SIMPSON’S INJURY
“Gabby has had some general back issues for a while now and she’s at a place where it might be more harmful for her to play rather than not. If it was up to her she’d probably want to play but it’s in her best interest to take some time. She’s done for the season.”

ON TEAM STRUGGLES THIS YEAR
“Anything I say is going to sound like an excuse so here they come if you want to hear them. I think that when we were healthy, we were a really good team. Our health degenerated throughout the season. Gabby is such a focus for us, we run the offense through her. As a setter and as an attacker, she is just such a large part of what we do and you can see that in the last several matches. Without her we are playing hard I think Marie [Zimmerman] has come in and has done a nice job, probably as well as she can. But it’s tough to replace a kids that’s probably one of the best in the conference. That’s been part of it. We’ve had little injuries here and there and things that have slowed down players and we don’t have the depth in some positions right now to make changes there. Our staff has been struggling and working as hard as we can to try to create systems that will help our current lineup work as well as it can. Sometimes it works and tonight it didn’t. Some of that blame lies with me as well. I still believe in the talent that we have and the group that we have. I think that all we can do is take this experience and get better from it. Cuff talked about the spring. We have work to do then and we’ll have a whole new group of kids come in next fall. We don’t want to have a second half of the season like this one again.

ON PAC-12 STRENGTH
“We play great competition every night. This isn’t a league where you can be limping along and ground out wins. You have to be going on all cylinders to compete. This is the second time we’ve been swept this fall.”

Cierra Simpson, senior libero
ON WHAT THE PLAYERS CAN TAKE AWAY FROM THE THIRD SET
“On the court, it felt like everything imploded. We couldn’t really make anything happen offensively or defensively. I think we started to go into our own little shells. The communication completely stopped. We can take that and know that it happened and not let it happen again. I feel like that’s really the first time that happened, like “Oh my god the sky is falling” in a set for our team. We now know what it feels like and we don’t want to feel that way anymore. It’s in our control so now we can forget about it.”

ON HOW THE TEAM SEEMED TO COME OUT FLAT FOR SENIOR NIGHT
“It’s a special night, whether you’re a senior or not. You’re celebrating teammates and usually it’s a night where there’s a lot more energy but it just didn’t really seem that way tonight. I’m surprised by that but at this point it’s short-term memory. We’ll have two more matches and we need to win them.”

Katelyn Cuff, senior middle blocker
ON WHAT THE PLAYERS CAN TAKE AWAY FROM THE THIRD SET
“There was a lack of communication and lack of trust within the players. We’ll learn from that in practice…trusting your players and going for every single ball. We’re definitely going to get our butts kicked this week (in practice).”

ON HOW THE TEAM SEEMED TO COME OUT FLAT FOR SENIOR NIGHT
“I think this will resonate with the underclassmen…this type of loss especially on senior night. We’re definitely bummed but we’ve both had a great career and a great time with this program. I think going forward they need to learn from these matches and go hard in spring.”